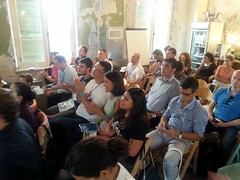 Upon visiting Tel Aviv in Israel in 2013, US president Barack Obama proclaimed: "If people want to see the future of the world's economy, they should look at Tel Aviv, home to hundreds of start-ups and research centres."

Visiting heads of state are prone to flattering their hosts, but where Tel Aviv is concerned its admirers stretch far beyond Mr Obama. Business platform Startup Genome ranked Tel Aviv as the second best start-up ecosystems in the world in 2012, with Silicon Valley in the top position. Behind this success are start-ups such as Get Taxi, Wix, EatWith, Waze and Weerkat.

"Innovation is in the DNA of Tel Aviv's citizens," says Hila Oren, founder and CEO of promotion agency Tel Aviv Global. "The city's first entrepreneurs were the 66 families who left nearby Jaffa a century ago, and invented a city that had never existed before, Tel Aviv, the first Hebrew City. Tel Aviv is also a ‘smart city’, which to us means engaging with our residents and putting people in the centre. And what's most important is that we are not afraid of failure. We see failure as a learning experience."

The city's innovation ecosystem is made up of leading hi-tech companies and multinational R&D centres, world-class talent, leading programmers and engineers, and an experienced community of veteran entrepreneurs and investors. The ecosystem is supported by the local government, which provides support through tax breaks, subsidised workplaces and the 'Startup Visa' project. Tel Aviv also boasts a cutting-edge art scene, picturesque beaches, outdoor cafes and a thriving culinary scene.

Tel Aviv's economy is driven by an ever-growing venture capital sector. Israel attracts more venture capital dollars per capita than any other country in the world and is among the locations with the greatest number of companies listed on Nasdaq, according to national government agency Invest in Israel.

One such Tel Aviv-based venture capital fund is Aleph, led by Michael Eisenberg. It is investing in internet and software start-ups such as Windward, which has developed maritime tracking and predictive technology. Mr Eisenberg left his home in New York 20 years ago to be part of what he calls "something different". "Tel Aviv is an exciting place, with a diverse young population, and lots of creative energy and chutzpah," he says. Indeed, the city has one of the youngest populations in the world, with more than one-third of its residents aged between 18 and 35.

In their book Start-Up Nation, Dan Senor and Saul Singer highlight the role of the Israeli military in fostering the country's start-up culture. At the age of 18, Israelis do military service for two to three years, and after that they typically enrol at a university.

Messrs Senor and Singer argue that the influence of the Israeli military experience in fostering entrepreneurship “is a story not just of talent but of tenacity, of insatiable questioning of authority, of determined informality, combined with a unique attitude to failure, teamwork, mission, risk and cross-disciplinary creativity… [the military’s] improvisional and antihierarchical culture follows Israelis into their start-ups and has shaped Israel’s economy.”

Geopolitics has made the Israeli military unpopular in many places globally, so it is an example that is not easy to put into marketing literature everywhere – but it is hard to separate the ethos and experiences gained during military service from those of business.

Some of world’s biggest IT companies have certainly taken notice of Tel Aviv’s tech-savvy attributes. For example, Google engineers in Tel Aviv and Haifa further up the Mediterranean coast have in six years launched everything from Google Insights for Search to putting the Dead Sea Scrolls and Yad Vashem projects online for the Google Cultural Institute.

Microsoft’s Ventures Accelerator Tel Aviv was founded to help start-ups pave their road to success. Start-ups chosen to take part in this programme are exposed to Microsoft's customers and partners around the world, they gain increased visibility to investors, benefit from hands-on mentorship from leading entrepreneurs, and participate in professional sessions led by experts in customer development, marketing and funding, among others.

Another multinational behemoth entering Tel Aviv is Coca-Cola, which is investing in the city's start-up scene through its Bridge initiative. This is a commercialisation project for start-ups, acting as a bridge between the Israeli entrepreneurial community and major global markets. Tel Aviv was the location of the initial pilot, which aimed to establish a regular annual programme, both in Tel Aviv and beyond, identifying and supporting start-ups that match the needs of Coca-Cola and its partners.

Some 250 foreign R&D centres are active in Israel, many of them in Tel Aviv, according to Invest in Israel. These R&D centres are concentrated in the fields of IT and enterprise software, communications, life sciences and semiconductors, with two-thirds coming from US companies. Both Microsoft and Cisco built their first R&D facilities outside the US in Israel, while Intel has four R&D facilities and two manufacturing centres in the country.

Israel's close links with the US make it unsurprising that American companies have been the most enthusiastic investors in the country. But China is also showing interest.

Over the past year, a number of Chinese companies such as Alibaba, Baidu, Lenovo, Ping An Ventures and Yongjin have reportedly been investing in Israeli start-ups and investment funds. Indeed, China and Israel have established a joint committee on innovation co-operation, and talks regarding a possible free-trade agreement between the two countries began earlier this year.

As Israeli prime minister Benjamin Netanyahu said at a joint press conference in Jerusalem in 2013 with Chinese foreign minister Wang Yi: “Our strengths, I believe, complement one another. China has massive industrial and global reach. Israel has expertise in every area of high technology. And I think that the combination could be very, very beneficial to China and to Israel.”

This article was written by ACI Executive Director, John West. It was first published by FDI Intelligence, a Financial Times magazine, on 12 August 2015.