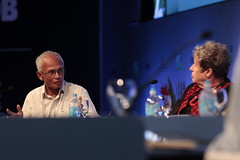 With India’s population projected to be the world’s largest in the coming decade, the country’s long-term development is increasingly relevant in the global economy, argue Asit Biswas, Kris Hartley.
The highest growth potential currently appears to be in knowledge industries, and India is a good candidate for international leadership given its large population of educated workers and culture of entrepreneurship. However, is the country poised to become an “innovation destination,” as claimed by Nasscom chairman R Chandrasekaran?

Patent grants, a simple but telling indicator of innovative capability, have declined in India for the past seven years, despite a concurrent rise in applications. This gap signifies a potential deterioration in the quality and legitimacy of India’s innovations, and suggests that India’s is only a minor player in the global patent race.

According to World Intellectual Property Organization (WIPO), India’s patent grants peaked in 2007 and declined thereafter. By contrast, regional competitor China rose consistently throughout the period and sharply after 2007. Corresponding figures for European Patent Office (EPO) also show that India failed to measurably improve grant performance outside a small spike in 2013. Again, China showed rapid growth in the same measures. Further, grants awarded by India’s patent office declined by nearly a third between 2009 and 2014.

The surprise is in United States Patent and Trademark Office (USPTO) data, according to which India’s grants outpaced those of competitor countries in the early 2000s, and even more rapidly since 2009. Coupled with its sudden decline in the WIPO, India’s rapid and nearly concurrent USPTO growth may be evidence that its patent applicants have changed their geographic preferences. Industrial structure may explain this paradox.

According to WIPO data, pharmaceuticals and organic fine chemistry accounted for nearly 40% of India’s patent grants from 1993 to 2013. This is a dominant position, given that these industries accounted for only 10% or less of grants in the US and China, and were scarcely measurable in Singapore. Computer technology (14.31%) was India’s only other industry in double digits. Biotechnology (5.05%), digital communication (3.34%) and medical technology (2.25%) scored surprisingly low given India’s competitive positions in these industries.

If major pharma companies — and there are only a few — change their patent filing preferences, the impact on India’s grant performance could be significant. According to the 2014 Annual Report of India’s patent office, pharma and related activities accounted for over 15% of registered trademarks and over 16% of trademark applications. By contrast, business administration and related activities – a distant second out of 99 industrial classes – represented just over 6% for both.

Clearly, there is high capacity in pharma, so innovation efforts can and should be channeled to improve India’s performance in global measures of competitiveness (e.g. patent grants). This would capture more interest among global investors and position India more credibly in the minds of international business leaders and strategists.

The gap between India’s impressive performance in the USPTO measure and its higher performance in academic publications may also be a result of pharma dominance. If pharma is indeed driving India’s patent performance, much research would not necessarily be published. Pharma R&D is driven by the temporary opportunity to legally monopolise new drug markets. As a result, the publication of proprietary information (including patentable innovations) may compromise the competitive position of individual companies.

The downside is lost opportunities for India’s R&D to be recognized (cited) by the international research community.

Overall, India’s reliance on pharma for a near majority of patent grants says little about the country’s innovative prowess. The United States, along with other developed countries and China, has a balanced patent profile and exhibits creative capacity across multiple sectors. This reflects high-quality education, institutional facilitation of innovation, and entrepreneurial drive.

A diversified innovation portfolio is more economically sustainable for reasons long held canonical. If pharma companies discover more favourable conditions elsewhere, how will India recover the loss? Furthermore, India’s reliance on pharma is indicative of corporate dominance in patentable innovation. Although pharma MNCs base R&D centres in India, output reflects their ability to marshal global talent more than India’s ability to innovate at the citizen level.

In recent negotiations for the Regional Comprehensive Economic Partnership (RCEP, a prospective trading bloc for the Asia-Pacific region), Indian representatives expressed dissatisfaction with higher standards for IP laws (modeled after TRIPS-plus). A recent survey found that a majority of leaders across various sectors found India’s IP policy structure inadequate; the country is even on an American-based “watch list” for substandard IP regulations (along with China and Russia). The associate vice president of the Pharmaceutical Research and Manufacturers of America (PhRMA) recently described India’s IP protection and enforcement “unpredictable.” These are ringing indictments, particularly given that India’s dominant pharmaceutical industry is dependent on reliable IP protection.

India’s engagement with a lucrative and global

pharmaceutical industry is contingent on its ability to protect IP. The answer is not to relax laws in order to stay (naively) competitive, but to undertake the toilsome work of improving innovation-enabling conditions (educational, institutional, and regulatory). Innovation is a global marketplace; it cannot be isolated and subjected to varying standards across countries. India’s pharma companies have already shown an ability to innovate. The Indian government should build on this momentum by embracing global standards for IP protection and concurrently investing in the foundations of innovative capacity and culture.

Finally, India should focus on building long-term innovative capacity beyond a singularly dominant industry (pharma). By investing in education, enabling entrepreneurship, and strengthening global credibility in its domestic institutions, India establishes a basis for competitiveness in emerging industries that may even have yet to be created. A long-term view of development – including a commitment to human capital and institutional reform in the present – will ultimately pay dividends for what will soon be the world’s most populous country.

This article was first published by the Sanchar Express on 22 July, 2015.