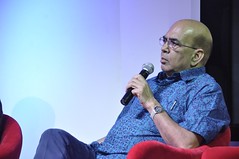 The Greek Referendum: No way to dodge the fundamentals?

What are we to make of the Greek Referendum, asks Satish Mishra.
The Greeks have voted. The question for the Referendum could have looked less like a high school end of term exam question. The timing could have been better, coming earlier in the negotiations. Greater effort could have been made to explain the implications of the Greek debt crisis to the rest of Europe in more compassionate terms than the Us and Them approach used by creditors in Germany and France. All of that is true. But the Greeks did vote. The vote was not rigged. There was a high enough turn out. They decided, with a significant margin, to reject the financial bail out terms offered by their creditors. They know that this might mean hard times ahead. They knew that the foreseeable future might even prove to be economically and socially catastrophic. But knowing all that, Greece gave a convincing ‘no’ to the creditors terms. What are we to make of that?

The immediate response from the creditors has been nothing short of mind-bendingly boring. Like prefects who catch a small boy smoking in the toilet Jeroen Dijsselbloem, who heads the Eurogroup, after weeks of waving the big stick at Greece, could only manage to find the result of the Greek Referendum ‘regrettable’. Others lament the permanent loss of trust between the Greeks and the Troika. There is no way, they claimed, that they could do business with the Greeks under this scenario. And then there is the IMF.

The IMF being the IMF wants to play for every side by switching attention from the immediate problem of liquidity support to the long-term fundamental problem of debt restructuring. And in the latest turn of events Yanis Varoufakis has submitted his resignation content to ‘wear the creditors loathing with pride’ having accused Greece’s creditors of ‘extracting milk from a sick cow by whipping it’.

Economic commentators and the ‘shaking heads’ in business channels such as Bloombergs and in the business news of major news channels are ferreting out the impact of the Greek default on the bond markets of Asia, Europe and the US. Nothing to worry about in Asia and the US; they are marginally connected to the Greek economy. In Europe the results are unknown and at this moment unknowable, so much too early to start worrying. Like the news covering dead bodies lying on the roadside in the aftermath of some grisly riot, economic commentary on the Greek ‘default’ has assumed all the characteristics of a crime thriller wrapped up in a soap opera. The story and its principal perpetrators can go on forever in one of those confess-and-tell poorly produced reality shows.

But away from the razzmatazz of the global media headlines and the repeated photo-shots of Tsipras in his white shirt and dark suit, the Greek Referendum has opened up a fundamental debate that goes way beyond the simplistic, formula driven analysis of the Greek economic crisis. What is interesting is just how often problems of politics and philosophy are pushed into the background by the events of the day. Just as interesting is the way in these more basic issues of culture and approach keep resounding back.

So, here are some things to think about in the aftermath of the Greek Referendum.

History records frequent cases where economic considerations have been secondary in a series of landmark decisions all over the world. It is important to distinguish the politics from the financial and the economic.

In the case of Germany for example neither the Versailles treaty nor German Re-Unification of East and West Germany, were driven by counting their economic costs. Neither, was the Marshall Plan where despite a ruined Germany the rationale for Allied Economic Assistance to Germany was as much as to thwart the spread of communism as to resuscitate the German economy. Second, the formation of the European Union was also not driven by the mundane aspirations of an enlarged market or the virtues of free trade. It was as much driven by the fatigue with war and the fact that European history recorded centuries of internecine bloodletting. The expansion of the EU to include Central and East European countries was also not driven by the economic benefits of such expansion but by a sense of common history and identity. History and politics came first. The doctrines of Smith, Ricardo and Milton Friedman provided mere icing on the cake.

China did not regain Hong Kong on the basis of some economic calculus. India did not fragment into India and Pakistan as a means of promoting economic growth or of balancing its budget. South and North Korea do not continue to threaten each other based on the cost and benefit of trade flows; nor does the Chinese hostility to the Dalai Lama have much to do with the growth of the Chinese economy. Apartheid did not end in South Africa because the country had a lamentable economy. Soeharto’s Indonesia did not implode simply due to a financial market collapse. Iran did not give way to the rule by a theocracy and the Ayatollah simply because its economy was in ruins.

All the above examples, that have shaped world history, were examples of the deep-seated influence of history, culture, a sense of injustice and a reaction against hypocrisy. Able leaders contributed by galvanising such public discontent into conscious if risky protests. The need to win hearts and minds is not only obvious in Afghanistan or Syria or Libya or Iraq or the back streets of Bradford or London or the outskirts of Paris. It is as applicable to the towns of Greece, Italy, Spain and Portugal or in the provincial towns of Poland, Romania and Bulgaria. By treating the Greek national revulsion against being whipped by creditors as a question of macroeconomics and a balancing of the ledger, Europe now risks losing cohesion, identity and direction. It risks going back to the historical tension and the incalculable cost of future mistrust and conflict.

Of course it can all be blamed on hard times, the wretched financial markets, US sub-prime mortgages, the complexity of hedge funds and the insatiable greed of the world’s bankers. But that will not help to explain to the Greeks why they need to keep borrowing to pay for an endless cycle of past debt.

In a Europe in which the Greeks have become little more than bonded labourers or the perpetually indebted peasants of 19th Century North-Indian plains, it is national pride and politics that will provide an explanation to the ‘surprising’ or ‘regrettable’ result of the Greek Referendum. The lessons of Greece will also not be lost on other countries that will face similar debt crises in future years. By driving Greece into bankruptcy from a fear of financial moral hazard, its creditors have now opened the door to a much more dangerous political moral hazard that undermines the creditability of the European idea itself.

Regrettable though the Greek vote might be in the eyes of Mr Dijsselbloem the political moral hazard that is triggered by creditor intransigence in Greece may well exact a much larger price on the citizens of Europe than any short-term economic loss. By concentrating on the present benefits and ignoring the future costs of taking a hard line with the Greeks, the Eurogroup has simply committed the error of dominant powers all through history; of walking in straight lines while navigating winding roads.