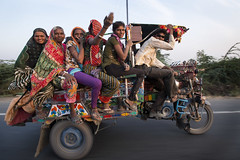 An in-depth analysis of India’s trade with the Asia-Pacific region by Mukul Asher and Keya Chaturvedi leads to some intriguing conclusions and sound recommendations.
The current government has initiated the process of energising India’s external economic relations in general, and external trade in particular, to facilitate higher and more regionally balanced economic growth, and to enhance livelihood opportunities. This has led to better economic coherence and coordination among agencies in India’s commercial diplomacy, and in foreign relations, auguring well for India’s economic and other engagements with the rest of the world.

There appears to be a perception, both domestically and globally, that India’s global integration as measured by its external trade is low in relation to the Asia-Pacific region, which is of vital importance for expanding India’s economic and strategic space. Empirical evidence presented below however strongly suggests that such a perception is unwarranted, and those holding it are likely to forego beneficial economic opportunities.

India on its part will need to continue to enhance its economic and strategic space in a global environment in which the relationship between growth in global trade in goods and services on the one hand, and global economic growth on the other appears to be weakening. For example, in volume terms, global trade during the 2000-2008 period expanded at an annual average rate of 6.8 per cent (equivalent to 1.6 times the growth in global GDP), but during the 2011-15 period, the corresponding growth rate is expected to be 4.0 per cent (1.1 times the growth in global GDP). Projections for the next several years portend subdued global GDP as well as global trade growth.

On a more positive note, according to data from World Trade Organization, (WTO) the share of developing countries in world exports has been increasing, from 24 per cent in 1990 to 45 per cent in 2014. Deeper and wider external trade integration globally could therefore enable India to more fully utilize this channel for sustaining high broad-based and regionally balanced growth, and provide livelihoods for its relatively young population.

India’s Ministry of Commerce reports that about a third of India’s total merchandise trade was with the Asia-Pacific region in 2014-15. If trade in services, investment, tourism, manpower flows and other components of economic interactions are included, the importance of Asia-Pacific region for India would be even more significant. According to the World Bank projections, India’s real GDP is expected to grow around 7 per cent over next several years. If these projections materialize, India’s 2014 GDP at current exchange rates of around USD 2.2 trillion is expected to approach around USD 4.5 trillion, providing considerable opportunities to its trading partners.

Before analysing India’s external trade indicators with the rest of Asia-Pacific, some conceptual and statistical aspects in conducting such an analysis may be briefly noted. First, both external merchandise trade, i.e. trade in goods, and trade in services need to be analysed for more complete understanding of external trade integration. With the proliferation of information technology intensive product innovations, traditional distinction between goods (manufacturing) and services is becoming less useful, as many goods (such as mobile phones) derive their value primarily from other services (such as software applications) incorporated in them. Similar trends are increasingly manifesting themselves in consumer durable goods, such as refrigerators and cars. Disruptive technologies, which may permit leapfrogging of stages (such as some Indian consumers may shift directly from Kirana or neighbourhood stores to buying on-line, bypassing supermarket stage), also are often based on informational technology platforms.

External trade analysis usually focuses on trade in goods thus neglecting trade in international service transactions. A primary reason for this emphasis is due to lack of comprehensive data on external trade in services. Disaggregation of total trade in services by trading partners is not usually published. This is also the case for India, a gap that must be addressed urgently.

The kind of commodities traded (key minerals and other resources), and the position in global value chain for a particular commodity sector (such as electronics and motor vehicles) are also relevant. But such analysis should cover both goods and services, and not just goods alone, as is usually the practice in most such studies and debates. As an example, for the electronics industry, software production and micro-chips design and tests are essential parts of creating value. Both these are services, and not included in the analysis of production networks. Such omission therefore leads to incomplete analysis of production networks. This is another reason why India should urgently consider regularly collecting and publishing data on its international services trade where it has global competitive advantage.

Ideally, external trade integration should be analysed by value-added per country in trade in goods and in services, and not on the basis of gross trade data as is routinely done currently. With elaborate production networks and global supply chains, value-added by a country is likely to be only a fraction of the gross value of trade. This suggests that India should increase value-addition occurring within India of its gross external trade. It is hoped that India’s recently announced Foreign Trade Policy (FTP) for 2015-2020 would be monitored not just from the perspective of trends in gross trade, but also on the basis of trends in value addition within India. Such estimates, relevant for both exports and imports of goods and services, should be a high priority for researchers on external sector both within and outside the government.

India’s total external trade in goods and services in 2013 was USD 1054.8 billion. It ranks fourth after China (USD 4,693.1 billion), Japan (USD 1855.9 billion), and Korea (USD 1292.9 billion). India thus has comparatively large potential to provide markets for its trading partners. This potential will increase as India’s 2015-2020 FTP aims to double its current level of exports of goods and services by 2020, with corresponding increases in its imports.

The importance of absolute value of external trade is often overlooked when the focus is on external trade ratio in relation to GDP. Even when this ratio is used, India with a value of 54.2 per cent compares favourably with other Asia-Pacific countries with relatively large populations such as China (51.9), Japan (33.6), Bangladesh (55.9), Indonesia (48.6), and Pakistan (33.8).

As compared to exports, India’s share in world imports (goods) was much higher at 2.47 per cent, compared to other Asia Pacific countries such as Indonesia (0.99), the Philippines (0.34), and Thailand (1.33).

India however ranks more favourably with other Asia Pacific countries with respect to share in world export and import of services, with shares of 3.25 per cent; and 2.84 per cent respectively. Preponderant share of India’s external trade in services exports is accounted for by “Other Commercial Services” (75.3 per cent), while transport and travel services account for only around 10 per cent each. In sharp contrast, “Travel Services” account for about a quarter of China’s exports of services. The shares for Thailand (71.3 per cent), Malaysia (54.0 per cent), and Indonesia (42 per cent) are much higher. India has also neglected the transport sector.

Thus, India exhibits relatively high global export share in services in spite of its relatively low exports of transport and tourism services. India’s focus on infrastructure for much improved connectivity among India’s different regions and with India’s neighbours, such as ports, railways, roads, electricity, and its focus on improving its ranking in ‘ease of doing business’ and facilitating tourism are expected to improve its competitiveness in these areas. Tourism could be a major growth node and livelihood generator for the economy, as Prime Minister Modi has repeatedly emphasized.

A substantial proportion of the other commercial services are provided to the electronics sector. India is therefore an integral part of the electronic production networks, when production is defined appropriately to include trade in service transactions.

India’s trade per capita (USD 820) is quite low when compared to other middle income countries in Asia-Pacific. The corresponding figures for China (USD 3175), Indonesia (USD 1699), Vitenam (USD 2757), the Philippines (USD 1440), and Malaysia (USD 16510), and Sri Lanka (USD 1744) are much higher. India’s challenge therefore is to increase trade per capita through diversification of its trade basket, through broader geographical coverage, and by improving trade capabilities of some of its States.

There are four broad policy implications arising from the above analysis.First, there is a strong case for India to compile and regularly publish data on bilateral trade in goods and services with its trading partners. India should also encourage policy relevant and strategic research on ways to expand and diversify India’s services trade. The Cooperative federalism initiative of the Union government provides ample scope for the individual States to play a vital role in promoting connectivity, and encouraging travel related services.

Second, the government’s current Make-In-India policy is subtle and requires an integrated and systemic approach for increasing India’s exports in goods and services. Improvements in value-addition within India could occur when capabilities are developed to supply some of the services currently being imported. As an example, currently a substantial share of financial services for projects, investment managements, and front-end work is being performed abroad, constituting India’s import of services. If an International Financial Services Centre (IFSC) within India, such as Gujarat International Finance Tech-City (GIFT) succeeds in having some of the international financial services being supplied from within India, value-addition in the finance sector will positively impact India’s external trade. The benefits would be greater if GIFT can supply financial services from India to countries other than those involved in the bilateral trade.

Third, the traditional distinction between trade in goods and trade in services is becoming less useful as an analytical framework. This is also the case with traditional distinction between agriculture, manufacturing, and services. Greater disaggregation of these sectors and understanding of inter-connectedness among them in creating economic value for the society are needed. India’s efforts must therefore be focused on increasing total value of trade, and capturing larger share of value-added generated by external trade to serve India’s economic priorities, and strategic interests.

Fourth, there is a strong case to monitor trade per capita and the geographical variations in it across India. Those parts of India, such as East and North-east regions, which currently exhibit lower physical and digital connectivity, are likely to have lower external trade per capita, reducing India’s national average. The government’s current efforts to increase connectivity among States, as well with the neighbouring countries such as Bangladesh, Bhutan, Nepal, and Myanmar will help improve trade per capita, and therefore help improve livelihoods in the region.

Finally, the above analysis strongly suggests that smoothening India’s continuing deeper integration with the Asia Pacific (and indeed with the global economy) is in the interest of India’s trading partners. Both India and its trading partners need to deepen and broaden interactions with each other, and explore mutually beneficial opportunities, while discarding current misconceptions.

Mukul Asher is a Professorial Fellow, National University of Singapore and Councillor, Takshashila Institution. Keya Chaturvedi is an Independent Researcher.