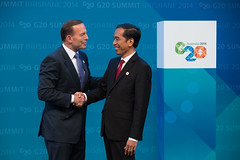 India will play a more prominent role in the next phase of the "Asian Century", which had hitherto been led by China, according to Peter Church, Chairman of the AFG Venture Group.
The Indian economy has picked up since Prime Minister Narendra Modi's administration took office in 2014, and is now growing faster than the slowing Chinese economy. And yet there is widespread frustration at the seemingly slow pace of economic reform under Modi.

"Give Modi time", said Church, in a recent interview with ACI Executive Director, John West. "India's challenges are enormous, especially in the areas of infrastructure and education. And as Modi's record as Chief Minister of the Gujarat state shows, he is a very determined 24/7 guy. India has great potential thanks to its many successful multinational enterprises, such as Tata, Godrich, Mahindra, Adani, Reliance Industries, Infosys and Wipro."

India is now "looking East" to the fast-growing markets of East Asia, rather than to its colonial masters to the West -- thanks in part to Modi's pro-active diplomacy, according to Church. India has very strong connections to Singapore, and increasingly to Australia (Church's country of birth). Indian families send their children to both countries for education and there is growing Indian migration of skilled workers. This is helping to forge strong business connections, not only in IT, but also in manufacturing and mining.

Church was much less optimist about the prospects for Indonesia, Asia's other big emerging democracy. The election of President Joko Widodo (known as "Jokowi") last year was welcomed by the international community. This self-made man, with a record of clean government when he was Mayor of Jakarta and Solo, gave rise to much hope.

But Jokowi took over the leadership of Indonesia as the economy was slowing due to the fading of the China-driven commodities boom. And it is also a time when growth rates of over 6% are necessary to absorb the youth bulge entering the labour market.

At a time when Indonesia needs effective leadership, Jokowi is proving to be a disappointment to locals and foreigners alike, remarked Church. He is a weak leader, and many are wondering whether he will survive. He is too beholden to his party leader, Megawatt Sukarnoputri, who chose him as her party's candidate and now treats him like a puppet.

One wrong-headed policy approach of the last government and Jokowi's is that of "resource nationalism" which is deterring much-needed foreign investment, due to tough requirements for local ownership, local processing of natural resources before export, and visas for foreign workers. Some foreign companies are being virtually pushed out of the country. Indonesia's resources sector (oil and gas, and minerals) is now in bad shape, and damaging economic growth.

Another disappointment is that the very successful Anti-Corruption Commission (KPK), which was strongly supported by former President Susilo Bambaing Yudhoyono, and is now, under Jokowi's watch, being undermined by powerful figures. Some members of the KPK have been put in jail, as have some civil society supporters of Jokowi. In short, Jokowi is also losing the fight against corruption.

Australia's political relationship with Indonesia is also troubled, especially following the Indonesia's execution of two Australian drug traffickers. The Australian government's threatening remarks through "megaphone diplomacy" against the impending executions only hardened the resolve of Jokowi to proceed with the executions. Caving into Australian demands to refrain from the executions would have been seen by Jokowi's domestic audience as weakness of an already weak leader in face of Australian bullying.

Other issues unsettling relations are Australia's aggressive approach to "turning back the boats" of refugees who are passing through Indonesian waters. This has reportedly involved payments by Australian officials to refugee smugglers and incursions into Indonesia waters. There is a perception that Abbott is playing the Islamophobic card for Australia's domestic politics rather than acting as a responsible leader in the Asian region.

In sharp contrast, the Indonesians are simply "puzzled" by Australia's current Prime Minister, Tony Abbott. Church suggested Mr Abbott should invest personal time in the Indonesia relationship in the same way that he spends some time each year with Australian aboriginal communities.

Interestingly, Church noted, Australia's business relations with Indonesia have been little affected by the ups-and-downs on the political scene. Over the years, Australia has built up very strong people-to-people relations in the business and academic spheres, which provide a lot of substance to the overall relationship. The Australian government should make greater efforts to leverage these people-to-people relations.

Singapore, where Church spends much of his time, was another topic of discussion. Church sees Singapore as a "wonderful business centre", which is so efficient and welcoming to foreign business. And Singapore invests heavily in the education of its citizens, thereby providing a means for upward social mobility. True, Singapore has huge gaps between rich and poor, but the availability of public housing helps here.

The Singapore government is seeking to promote more innovation and entrepreneurship. But young entrepreneurs often struggle in Singapore's small market. They need to take a regional approach.

Much recent attention has focused on Singapore's future in light of the passing of Lee Kuan Yew. In reality, says Church, Singapore has been transitioning towards a post-Lee Kuan Yew era for some time. Although Singapore remains a virtual one-party state, the government listens very closely to public opinion, especially with regard to the touchy issue of migration. (Many Singaporeans feel they are being squeezed out of both the jobs and housing market by migrants.) Overall, the Singapore government now governs on the basis of a "social contract" with its citizens, rather than by arbitrary dictates.

In general, Singapore's citizens see the government as competent and clean, and are happy with its performance. They are particularly happy when they compare their lot with those of their much less successful and less stable neighbours, especially Malaysia which is now suffering from political instability. Nevertheless, Singapore will likely in time become a true democracy with changes in the ruling party (the ruling party's share of the national vote has been on a declining trend). Singaporeans, like educated and prosperous people everywhere, want to have a direct say in running their country.
Tags: asia