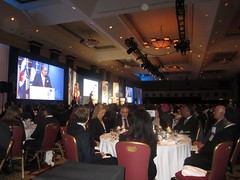 Register now for the 2015 Toronto Global Forum: Pan American Edition ahead of the 2015 Pan Am and Parapan American Games - July 8-10, 2015. Registration details in link in Reference section below.

What's on the agenda?

Under the theme of "Creating opportunities in a connected world", this year's edition of the Toronto Global Forum will tackle some of the hottest issues on the international agenda, such as finance, trade, innovation, energy, infrastructure and commodities.

There will be individual sessions on topics like: A New Economic Era: Moving From Austerity to Prosperity; The Internet of Everything: Connecting for Better Business; High-Growth Companies: Key to Improving Long-Term Competitiveness; Bringing Financial Literacy to the Workplace; Infrastructure: Paving the Way towards Economic Growth; Pan-American Perspectives: Towards A Shared Vision For The Caribbean; Energy for the Future: The Potential of Smart and Micro Grids; Creating New Models for Infrastructure Financing; Energy Outlook: Responding to a New World Energy Map; and International Trade: Platform for a New Global Prosperity.

Who will be speaking?

The 2015 Toronto Global Forum will bring together a bevy of international business, government and media personalities, such as:

* Ólafur Ragnar Grímsson, President of the Republic of Iceland.

Be there at the 2015 Toronto Global Forum along with the 2000 participants and 100 speakers, over three days. It takes place on July 8-10 at the historic Fairmont Royal York Hotel in downtown Toronto.

Register now for this season's "must-go" event!! See the link in the Reference section below: