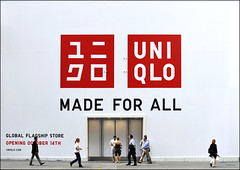 Japanese lessons: what the country can learn from Uniqlo's success

The Japanese government could learn a lot from the success of Uniqlo, writes John West.
Fashion brand Uniqlo, part of Fast Retailing, the world's fourth largest retail holding company, has expanded rapidly in recent decades, both at home and abroad. It is a success story – with highs as well as lows – that CEO Tadashi Yanai is urging the Japanese government to learn from.

Japan has long been known for its automobile and electronics companies, which are major players in global FDI and trade. More recently, Japanese retailers such as Uniqlo have been following in their footsteps, in the process bringing a new style to global markets.

Uniqlo (a contraction of 'Unique Clothing Warehouse') is the brainchild of Tadashi Yanai, the chairman, president and CEO of Fast Retailing, of which Uniqlo is the leading subsidiary. Fast Retailing's origins can be traced back to Mr Yanai's father's tailor shop in rural Japan, which Mr Yanai took over. The Uniqlo brand had equally humble beginnings, with its first store opening in 1984, in Hiroshima, far from Japan's sophisticated and fashionable capital of Tokyo.

While the Japanese economy has suffered from stagnation over the past two decades, Uniqlo has enjoyed stunning success both at home and abroad. Uniqlo Japan had some 852 stores as of August 2014, while Uniqlo International had 633, with plans to open another 200 by August 2015.

Uniqlo International's greatest presence is in Asia, where it has 374 stores in mainland China, Hong Kong and Taiwan, 133 in South Korea, and 80 in south-east Asia and Oceania. The company’s presence is much more modest in Europe and the US, although three prominent stores in New York are reportedly generating double-digit sales growth.

"As the world's largest consumer country, the US offers the most exciting opportunity for Uniqlo outside Asia," said Mr Yanai in an interview posted on Uniqlo’s website. "But determining how to develop the brand and build a profitable business there is a huge challenge."

Uniqlo's success to date has brought great fame and fortune to Mr Yanai, as well as his company. He is regularly ranked as one of Japan's wealthiest people, with Forbes magazine’s most recent estimate putting his family's net worth at $22.3bn. Furthermore, Mr Yanai was the only Japanese person to figure in Time magazine’s 2013 list of the 100 most influential people in the world.

As for the company itself, with sales of $13.33bn in 2014, Fast Retailing is now the world's fourth largest fashion retailer, after Spanish multinational Inditex (which owns Zara), Swedish clothing store H&M and US-based Gap. The company won the 2014 Retailer of the Year Award at the World Retail Congress for its 'exceptional world-class performance'. "I see this as a testament to Uniqlo's unique position as the world's only LifeWear brand,” Mr Yanai said in a 'message from the CEO' in the Fast Retailing annual report 2014. "LifeWear means everyday clothes for a better life – high quality, fashionable, affordable and comfortable," he added.

As Japanese prime minister Shinzō Abe struggles to revive the country's economy through his Abenomics programme of economic policies, there is a growing chorus of commentators pushing the government to seek lessons from success stories such as Uniqlo. Indeed, Mr Yanai has been very vocal in calling on Japan to learn from its mistakes, just as Uniqlo has done.

"We opened our first store outside of Japan in 2001, in London, and we failed spectacularly," Mr Yanai wrote in an article in business magazine McKinsey Quarterly. "China, the second overseas market we entered, was a failure too… The important thing is not so much that we failed in these instances, but that we learned and eventually succeeded."

This article was written by John West, Executive Director, Asian Century Institute. It was first published by FDI-Intelligence, a Financial Times magazine on 11 June, 2015.

- Japanese lessons: what the country can learn from Uniqlo's success, by John West. FDI-Intelligence, 11 June 2015.