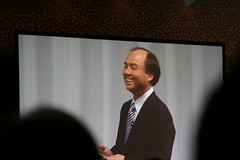 Since its foundation in 1981, SoftBank has “helped to change Japan through the information revolution”, the company’s chairman and CEO, Masayoshi Son, has declared in his CEO’s message on the company’s website.

When he started the company, Mr Son told his only staff, two part-time workers: “In five years, I’m going to have $75m in sales. In five years, I will be supplying 1000 dealer outlets, and we’ll be number one in PC software distribution.” His employees did not share this confidence and, according to Mr Son, they thought “this guy must be crazy. And they both quit,” he recounted in a 1992 interview with Harvard Business Review.

But SoftBank – meaning a bank of software – has since grown into a global telecommunications and internet giant, surpassing even the expectations of its ambitious founder. It currently ranks among the top five companies on the Tokyo Stock Exchange in terms of market capitalisation and Mr Son, who was born in Japan but is of Korean heritage, has become the country’s wealthiest person, according to the 2015 Forbes rich list. This, despite having suffered what is estimated to be the largest ever financial loss by a single person in the dot-com crash of 2000.

SoftBank’s stunning growth has been driven by a series of strategic investments and partnerships. Today, there are more than 1300 companies in the SoftBank Group.

After going public in 1994, SoftBank established Yahoo! Japan Corporation in 1996 as a joint venture with US internet multinational Yahoo!. Mr Son was Yahoo! Japan’s first president and CEO and later became chairman of the board, a position that he still holds. Yahoo! Japan launched the first commercial search site in Japan, and is currently the country’s most popular internet search engine, according to research by Oxford Internet Institute. In another seminal move, in 2001, together with Yahoo! Japan, SoftBank rolled out Yahoo! BB, an ADSL internet connection service that made the internet both fast and affordable in the country.

SoftBank furthered its position in the communications industry with its acquisition of telephone company Japan Telecom (now SoftBank Telecom) in 2004 and mobile phone operator Vodafone KK (now SoftBank Mobile) in 2006.

Another major breakthrough for Mr Son came when he negotiated a deal for SoftBank to become the exclusive carrier of Apple’s smartphone, the iPhone, in Japan, as part of an exclusivity deal that lasted four years up to 2012. Mr Son recognised the smartphone’s potential early; the iPhone has since become the most popular smartphone in the Japanese market.

In July 2013, SoftBank bought the number three US mobile carrier Sprint Corporation, as part of its drive to expand outside Japan. “We have just started our rebuilding of Sprint,” said Mr Son in his CEO message. “Sprint’s network is weak, and so is its brand. Earnings are also lacklustre. So it’s quite a tough situation.” But, with the appointment in August 2014 of new Sprint CEO Marcelo Claure, Mr Son is confident that the company will be able to shake up the dominance of the US market by rivals AT&T and Verizon.

It was the same forward thinking that saw Mr Son invest $20m in Chinese electronic commerce giant Alibaba in 2000, when the company was just a start-up. SoftBank is the single largest shareholder in the Chinese e-commerce behemoth, with a 33% stake in the company. Following Alibaba’s successful initial public offering in 2014, SoftBank investors have benefited to the tune of $87bn.

“SoftBank is a goose with more golden eggs in its belly, even if it’s too early to bring them to the market,” Mr Son said at a briefing in Tokyo in November 2014. “SoftBank is currently valued less than the sum of its golden eggs.”

One of these golden eggs may be Pepper, a robot that can read emotions and is designed so that people can interact with it in the same way as with family and friends. In 2014, SoftBank and Aldebaran Robotics, the world leader in humanoid robotics, announced the joint development of the robot. Pepper will be commercially available in Japan from February 2015.

It is not just its investments that make SoftBank stand out; its corporate governance and management style is very progressive, especially by Japanese standards. The corporate board is not a cosy old club of insiders. There are three external directors – Tadashi Yanai, chairman, president and CEO of Japanese retail conglomerate Fast Retailing; Mark Schwartz, the chairman of investment firm Goldman Sachs, Asia-Pacific; and Shigenobu Nagamori, chairman, president and CEO of Japanese electric motor manufacturer Nidec Corporation.

Major business decisions are reportedly debated with great fervour, and SoftBank employs a “federal management” approach, according to Mr Son, whereby each of the group’s companies captures synergies under a common philosophy, even while making autonomous decisions.

Moreover, SoftBank is not an Asian conglomerate dominated by a family dynasty. Mr Son created SoftBank Academia to discover and train the next generation of employees at SoftBank.

His philanthropic efforts are not just connected to business, either. Saddened by the impact of the 2011 earthquake off the Pacific coast of Tōhoku in eastern Japan, Mr Son set up the Great East Japan Earthquake Recovery Initiatives Foundation and made a personal donation of Y10bn ($84m) to assist relief efforts. And, to address the energy crisis triggered by the damage done to the Fukushima Daiichi nuclear power plant in the earthquake, he established the Renewable Energy Council and Japan Renewable Energy Foundation.

In 2005, SoftBank also moved into baseball, one of Japan’s most popular sports, with the purchase of the Fukuoka Daiei Hawks, now the Fukuoka SoftBank Hawks, which won the Japanese Championship series in 2011 and 2014.

An immediate focus for SoftBank is the US, with its ambition to become the world’s leading mobile internet service provider, through its acquisition of Sprint. SoftBank is now also turning its attention to India, where its has announced plans to invest about $10bn in e-tailing and technology companies over the coming decade.

Already, SoftBank is investing $627m in Delhi-based e-commerce player Snapdeal, and pumping as much as $180m in taxi service start-up Olacabs, which competes directly with Uber.

Looking further ahead, SoftBank shows no signs of reigning in its ambitions. The company aims to achieve a market capitalisation of Y200,000bn yen in 30 years’ time – which would be a 20-fold increase – and expand the number of companies within the group from about 1300 to 5000 in the same period.

“From our 34th year onward,” Mr Son vowed in his CEO message, “I hope to begin the second stage of our journey; I want us to spread our wings and change the whole world through the information revolution.”

It was originally published by FDI-Intelligence, a Financial Times magazine, on 16 April, 2015.