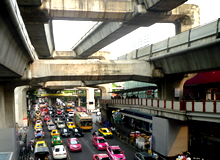 These export-driven economies exploited the open and gigantic US market. They also benefited from the progressive liberalization of trade and investment through the GATT, and regional liberalization in Europe, North America and ASEAN countries of Southeast Asia. More recently, ASEAN has negotiated free trade agreements with Japan, China, Korea, India, Australia and New Zealand.

The next phase of Asian development was driven by foreign direct investment in Southeast Asia and China. This investment established the global value chains that crisscross the region, and whose final export products mainly target American and European markets.

In light of this beautiful story of open trade and investment driving development, we would hope that further market was underway -- especially since American and European economies are now on a slower growth trajectory.

But today trade and investment liberalization seems blocked in Asia, despite a flurry of ambitious initiatives:

The WTO's Doha trade talks, bogged down since they were launched in 2001, seemed to experience a partial resuscitation in December last year in Bali. There was agreement on the trade facilitation element of these talks which would streamline the flow of trade.

Despite their seeming arcane nature, the potential benefits are enormous. The trade facilitation deal could add $1 trillion and 21 million jobs to the global economy.

But just recently, India torpedoed this agreement. This is a tragedy. There is perhaps no country more in need of market liberalization and trade facilitation than India. It also dashed hopes that India's new Prime Minister Modi could bring a breath of fresh to this lumbering elephant of an economy.

The prospect of any trade and investment liberalization through the WTO now seems more distant than ever.

This is very evident from America's lack of faith and interest in the multilateral trading system. The US is now putting all its trade energy into the Trans Pacific Partnership (TPP) trade talks, as well as the Trans Atlantic Trade and Investment Partnership.

The TPP is an appealing and ambitious initiative which goes beyond trade to include investment, competition policy, intellectual property and other "21st century issues".

But the TPP is quickly losing steam. The US, which is pushing these talks, doesn't even have Congressional approval. Civil society and public opinion is now rising against the TPP in many participating countries.

The TPP is perceived as motivated by an American corporate agenda which would be damaging to jobs, income equality, the environment and affordability of medicines. Moreover, Japan, a country which desperately needs trade and investment liberalization, is resisting substantial market opening. And China, which declined an invitation to participate in the TPP, is now arguing that the initiative promotes American hegemonic ambitions, by excluding China.

Insiders believe that the best outcome might be a low-quality agreement. This would save face across the Pacific, but with little or no effective market opening.

Let's come to the Regional Comprehensive Economic Partnership (RCEP). This is an initiative to create one agreement out of the separate ones between ASEAN and China, Japan, Korea, India, Australia and New Zealand. The expressed intention is to not only put together these six agreements, but to go further by deepening trade and investment liberalization. However, the reality is that these trade talks promise very little further liberalization. Negotiations to date have achieved very modest results.

China, Japan and Korea have also been discussing the idea of a free trade agreement. Trade liberalization between these big and protectionist economies would offer great benefits. But geopolitical tensions and distrust mean that no progress has been made in launching negotiations.

APEC (Asia Pacific Economic Cooperation) has been dreaming of free trade and investment since its creation some 25 years ago. But in typical APEC style, the proposal for an FTAAP (Free Trade Agreement in the Asia-Pacific) stumbles on from expressions of good intentions to study groups, with no concrete results.

So today, we stand in a pretty miserable position. Open trade and investment liberalization, the very magic potion of the Asian miracle, is now blocked. Indeed, since the global financial crisis exploded in 2008, there has been a steady rise in protectionism according to the Global Trade Alert, with Asia's big economies being leading offenders.

This moment could well represent a tragic turning point, of historic proportions, in Asia's economic development -- unless leaders pull a surprise out of the bag. But in today's Asia-Pacific, with its abundant caution and vanishing leadership, this is not likely!