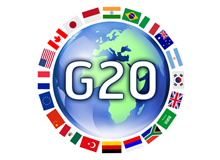 Australia will be hosting the G20 meetings this year, with Prime Minister Tony Abbott chairing the leaders' summit.

Mr Richard Goyder, B20 Australia Chair and Managing Director and CEO of Wesfarmers, said the B20 Australia Summit had brought together nearly 400 business leaders and policymakers to finalise and prioritise a set of recommendations for G20 leaders that drive growth and create jobs.

"The result of this work is a set of 20 mutually reinforcing recommendations for action by G20 leaders," Mr Goyder said. "Our analysis suggests that if these were adopted, the G20 would not only meet, but exceed the two per cent additional growth target set by G20 Finance Ministers in February."

The G20 has set a target of lifting collective GDP by two per cent above the trajectory implied by current policies over the next five years – worth more than $2 trillion in real terms and tens of millions of jobs.

"To meet the target, G20 countries must commit collectively to implement unilateral structural reforms that boost employment and prospects for diversified and sustained growth – more trade, better infrastructure, safely regulated, accessible and affordable finance, and human capital in the right place, at the right time with the right skills."

Mr Goyder said the B20 had concentrated on identifying the major impediments to growth through five groups focused on the core economic drivers of trade, infrastructure, human capital, finance and transparency.

"What we are recommending is mostly new structural reform measures that would deliver on the G20 growth target and form a blueprint for sustainable economic growth in the medium term," Mr Goyder said.

"Private sector investment is a prerequisite for sustained and inclusive economic growth. It is essential to job creation and higher standards of living. We are asking governments to remove barriers and impediments to growth."

"If G20 countries commit to these reforms, the gains will be large, but a failure by any of the G20 countries to commit will mean a significant opportunity cost."

B20 recommendations are drawn from four common themes that are critical to success in a global economy: (i) Structural flexibility; (ii) Free movement across borders of goods, services, labour and capital; (iii) Consistent and effective regulation; (iv) Integrity and credibility in commerce.

"We need policies that ensure greater structural flexibility and freedom of movement across borders of goods, services, labour and capital within an effective regulatory framework which promotes transparency in commerce."

"The recommendations are specific, practical and actionable and if implemented will lift inclusive growth, boost participation, create jobs and build the resilience of the global economy."

1. The urgent goal is growth and jobs to lift living standards around the world. There is no room for complacency.

2. The G20 is the right forum to pursue this goal, because it is the only forum capable of achieving the coordinated action necessary to drive and shape the global economy.

3. The G20 has set a realistic and necessary growth target, but now must focus on how that target will be achieved.

4. B20 has identified policy principles to meet the target by focussing on the major impediments to growth and jobs creation.

5. The B20 recommendations require collective agreement by the G20 for unilateral action by each member country

The B20 delivered the recommendations to the G20 presidency through the Prime Minister, Treasurer and Minister for Trade and Investment.

The B20 has concentrated on identifying the impediments to a more conducive environment for investment and growth through five groups focused on the core economic drivers of trade, infrastructure, human capital, finance and transparency.

International trade is the world's growth engine. It is essential to securing global job creation and higher living standards. A targeted set of four high impact B20 recommendations, if implemented, could generate up to $3.4 trillion in GDP growth and support more than 50 million jobs across the G20 economies. This would be akin to adding another Germany to the global economy. Business therefore encourages each G20 economy to incorporate an ambitious domestic reform agenda, which explicitly targets trade-enhancing measures, into their Country Growth Strategies. This will encourage countries and businesses to allocate their scarce resources to the industries and activities where they are most competitive, acknowledging that 'Made in the World' is the reality of modern global trade.

High quality economic infrastructure underpins economic activity within and across national borders. It promotes development in emerging economies, growth and employment in developed economies and trade between all. However, it is estimated that by 2030 there will be a gap of ~$15-20 trillion in infrastructure capacity. Over the long run, closing this gap could create up to 100 million additional jobs and generate $6 trillion in economic activity every year. A big part of the solution is greater private sector investment in productive infrastructure, partnering with governments to build and manage public investments more effectively, and communicating infrastructure benefits to the public.

Economic growth must be accompanied by growth in jobs. There is evidence of a modest recovery in some advanced economies, but the increase in global employment is below pre-crisis trends and is inadequate to absorb the expanding global labour force, with young people and the long term unemployed remaining particularly affected. Without continued investment in people, countries will be unable to fully realise the potential of trade and infrastructure investments or increase the quantity and quality of the labour force and employment opportunities, which in turn drive continued productivity and sustainable economic growth.

Overall, the challenge of stimulating growth will be facilitated by finalising core reforms to the financial system and implementing them according to agreed timelines. This would address the uncertainty that may have constrained the provision of credit in some markets and enable the financial regulatory agenda to transition from the crisis response phase. As part of this transition, it is timely to review financial regulatory processes at the Financial Stability Board and the other standard setting bodies. B20 also supports complementing the financial regulation agenda with reforms that deepen the range of sources of financing for investment in order to strengthen sustainable medium-term growth.

If corruption were an industry, it would be the world's third largest, worth more than $3 trillion and five per cent of global GDP. Corruption is a major obstacle to sustainable economic, political and social development as it increases the cost of doing business, decreases cross border investment and trade facilitation, and generates waste and inefficiency in the use of public resources. Incentivising business to act responsibly is important to reduce the supply of corruption. At the same time, business wants to see a concerted effort to enforce existing laws that reduce the demand for corruption, building capacity for integrity and penalising corruption in public office.

To promote structural flexibility, all G20 governments should:

1. Rapidly implement and ratify the Bali Trade Facilitation Agreement and provide capacity-building assistance and financial support for developing world trade partners to do the same.

4. Establish, publish and deliver credible national infrastructure pipelines that have been rigorously assessed and prioritised by independent infrastructure authorities, and which take full advantage of private sector finance and expertise.

5. Establish an Infrastructure Hub with a global mandate to disseminate leading practice to facilitate the development and delivery of pipelines of bankable, investment-ready infrastructure projects.

7. Increase the level of alignment and responsiveness between the learning ecosystem and workforce needs.

9. Undertake structural reform to increase flexibility, adaptability and mobility within and across labour markets.


To promote free movement across borders, G20 governments should:

10. Reinforce the standstill on protectionism and wind back barriers introduced since the implementation of the standstill, especially non-tariff barriers.

12. Work towards greater promotion and protection of cross-border capital flows and foreign direct investment (FDI) through a Model Investment Treaty.


To promote consistent and effective regulation, all G20 governments should:

13. Finalise the core global financial reforms in 2014 and establish a protocol for international rule-making processes commencing in 2015, which better engages the private sector to ensure rules are fit for purpose and fully take account of their impact on the real economy.

15. Review prudential and conduct regulation to ensure restrictions on access to finance do not unduly hamper financial inclusion, trade and commodity markets and finance for SMEs.

17. Implement transparent infrastructure procurement and approvals processes that comply with global leading practice, including a commitment to specific timeframes for approvals.


To promote integrity and credibility in commerce, all G20 governments should:

19. Enforce applicable legal frameworks such as the OECD Anti-bribery Convention and UN Convention against Corruption and implement or strengthen a national independent corruption authority in each jurisdiction to monitor and enforce.