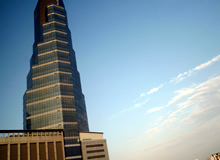 Asia is key participant in global supply chains. Countries like Japan, Korea, Taiwan, Malaysia, and China participate in manufacturing supply chains for electronics products. China, Bangladesh, and Cambodia lead in clothing and textile supply chains. Thailand is at the heart of Japanese production networks for motor vehicles. And India and the Philippines are leading business process outsourcing.

These supply chains are driven by international investment and trade, and provide a critical entry point into the global economy. They have provided a fast track to development, prosperity and poverty reduction.

But a close examination reveals that Asia's participation in the international investment and trade is lopsided. The region could benefiting much more than it is today.

In a number of countries, exports are directly or indirectly subsidized. Ultimately, this is a waste of good money that could be used for other purposes, like reducing poverty at home. And it is a major irritant for the US and Europe, which are the major destinations for the Asian exports, and which see their own industries suffering as a result.

There are two main forms of export subsidization.

Countries like China launched their entry into the global economy by creating special economic zones. These zones provide many incentives to attract investment and underwrite exports. Things like tax holidays, duty-free imports, and cheap land, energy and finance. In China and elsewhere, state-owned enterprises usually benefit from similar incentives, thanks to their cosy relationships with the Chinese government.

Perhaps the most egregious form of export subsidisation from Asian countries is exchange rate manipulation, again especially by China. While economists and commentators may debate the validity of an exchange rate level, the simple fact is that China and some other Asian countries have deliberately accumulated massive foreign exchange reserves, mainly dollars, through their efforts to artificially repress the value of their exchange rates. For example, China has accumulated over $4 trillion in reserves, while Japan has $1.3 trillion and Taiwan $430 billion.

There may have been a case for subsidizing exports in the early stages of development. This enabled infant industries to enter and be competitive on global markets. But that day has long since passed.

China for one knows that it should wind down its export subsidization. But it fears the adjustment costs in the form of unemployment, and it is subject to lobbying by big companies which depend on these subsidies

Along with Norway and Switzerland, Japan and Korea provide world record protection to their agricultural sectors, with well over half over of gross farm receipts coming from producer support.

In both countries, the agricultural sector failed to modernize in tandem with the manufacturing sector. Protection was ramped up to help farmers, rather than forcing them to become efficient. Thus, agriculture is now withering away, with the average age of farmers over 60 years.

Food security is often used as a justification for maintaining agricultural protection, even though Korea imports over 90% of its food requirements, and Japan imports 60%. In reality, developing an efficient agricultural sector, through reduced protection, is one of the best ways to promote food security. A highly protected, low-productivity, inefficient agriculture does not help at all.

Other means to improve food security include investing in agricultural assets overseas, as China, Japan, Korea and some other countries are doing. They are making vast agricultural investments in Africa, Latin America and Australia. When it comes to short-term food security risks, maintaining strategic stockpiles of key agricultural commodities is usually the most effective tool, rather than maintaining an inefficient agricultural sector.

The main reason that agricultural protection persists is that farmers hold great political voting power. This means that international pressure to reduce protection has limited impact.

Asia's big emerging economies of China, India and Indonesia suffer from very high restrictions on their imports of services, according to a recent OECD study. These restrictions are often two to three times higher than in the advanced OECD countries. They are an important reason why service sector productivity in these countries is lower than in their manufacturing sectors, and also very much lower than in service sectors in OECD countries.

This study examines the effect of regulations, competition barriers, restrictions on foreign investment, and restrictions on the movement of people as service providers. The service sectors covered include telecommunications, computers, transportation, distribution, commercial banking, insurance, and professional services like accounting, legal, architecture and engineering.

Although foreign investment has played a critical role in the establishment of Asia's supply chains, countries like China, Indonesia, Japan, India and Korea maintain very high barriers against foreign investment, even if those barriers are being reduced. The only Asian economies to practice true openness to foreign investment, like the Netherlands, Belgium, Germany, France and the UK, are Hong Kong and Singapore.

While Japanese companies are free to penetrate markets the world over, they are mostly protected at home. By holding out foreign investment, Japan is depriving itself of a source of economic dynamism, innovation and efficiency. This is one reason why Japan's productivity is still about 30% lower than the US's.

Japan may be the most extreme case of Asia's lopsided trade and investment.

Prospects for trade and investment liberalization

There are many trade talks underway in Asia and elsewhere, like the Trans Pacific Partnership, Regional Comprehensive Economic Partnership, China/Japan/Korea, and Transatlantic Trade and Investment Partnership. But the reality is that most of these trade talks are moving slowly at best. And since the outbreak of the global financial crisis in 2008, there has been a generalized protectionist trend. From a long term proint of view, this is a very disturbing development.