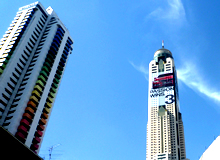 Under free trade, countries will naturally exploit their "comparative advantage". This means that a country like the US with lots of human capital, investment and technology will tend to specialise in the export of high-tech products.

This is in sharp contrast to a poor country, like Japan was in 1950 and China was in 1980, that has only has lots of low-skilled labor, and very little technology. In this situation, under free trade, the US would export airplanes, computers, pharmaceuticals and so on. And Japan and China would export clothing, toys and simple electronics products.

Free trade is efficient because each country exploits its strengths. Everyone is better off. It is "win-win".

But for poor countries there is an added benefit. By servicing international markets, companies are required to meet the international product quality standards. This learning process helps them progress and climb the development ladder.

Thus, over the years, Japan built up its human capital, investment and technology, as China is doing today. It transformed itself from a low-tech country into a high-tech country. Japan is now a leading exporter of motor vehicles, electronic products and sophisticated componentary.

But the world of trade is also transforming. Decades ago, companies used to produce most final products in one factory. It was convenient to locate product design, component manufacture, assembly, marketing and branding all under one roof. This made coordination of all these processes much easier.

Now thanks to information technology, we can coordinate these functions at a distance. This is the science of "supply chain management". Thus companies can outsource these different functions to the lowest cost location. This also means that foreign investment is part and parcel of international trade, as companies invest in production facilities in these outsourcing countries.

The i-Phone is the perfect example. The creative design phase is located in California. The high-tech components are produced in Japan, Korea, Germany and Taiwan. The lower value-added assembly takes place in China. While the high-value added marketing and branding is back in California.

This system of breaking up the supply chain is the most efficient means of production. It means that no one country produces a product like the i-Phone. Many different countries specialise in different phases (or tasks) of the i-Phone production cycle.

Contrary popular beliefs, China is not the producer or exporter of the i-Phone. It is the assembler, and it merely exports its assembly services. Today, about one half China's exports is "processing trade" of this nature, mainly undertaken by foreign companies, not Chinese ones.

Asia is now crisis-crossed by such supply chains. How did they get launched?

Under pressure from the US and other Western countries, in 1985 Japan revalued its yen exchange rate. This meant that low value-added, labor-intensive manufacturing was no longer competitive. So Japanese manufacturers, who were used to working with a local supply chain of small enterprises, began outsourcing or offshoring this low-end manufacturing.

Korea and Taiwan were some of the initial destinations for this outsourcing. Then some Southeast Asian countries, and then China. Thus began a tidlewave of outsourcing as Hong Kong, Taiwan, Korea, the US and many other countries followed suit by outsourcing low value added activities.

The advent of these supply chains (also known as value chains or production networks) has opened up new development opportunities. A developing country does not need to produce a whole product to participate in global markets. It need only be capable of performing one task, like assembly.

But once a country has entered supply chains at the bottom of the ladder, it should not get complacent. It can get stuck forever at this point in the supply chain, unless it invests in its local human capital and technological capacity. The development challenge is all about increasing value added and undertaking more complex tasks in the supply chain.

And while supply chains have opened up new development opportunities, not all countries have been able to take advantage of them. The Philippines and India only participate weakly in manufacturing supply chains. Despite their huge English language speaking populations, they have not been attractive investment locations in light of their poor infrastructure, deep corruption, and physical insecurity, especially in the case of the Philippines.

A country's position in the supply chain can also never be taken for granted. As we write, China's food industry is tainted by another food scandal, as one company has been exporting rotten food. It is important to be a reliable supplier, which can be difficult in a system where corruption runs so deep. There are many other cases where quality control has been a problem.

Staying competitive is also a challenge. As wages have been rising in China, some US companies have been "insourcing" or "reshoring" some production back home. Rising wages in China are good for workers' welfare, but they must be accompanied by rising productivity.

Asia's supply chains have also given rise to some major scandals. Last year in Bangladesh, "Rana Plaza", a building that housed clothing factories, collapsed killing 1129 workers, most of whom were women.

Bangladesh's clothing industry has been very beneficial to the country, and employs about 4 million workers, mainly women. But it has exposed them to the risk of dangerous working environments, because local businessmen flout building and safety regulations, often in collusion with government authorities.

Under pressure from Western trade unions, NGOs and public opinion, many Western brand companies now accept that they have a responsibility. After all, they choose their suppliers. So a large number of Western brand companies have signed up to process of inspection of Bangladeshi factories, which may be closed if they failure the building and safety standards.

There have also been scandals surrounding electronics factories in China, especially those owned by Foxconn, the Taiwanese company that assembles electronics products for Apple and other companies. As exposed by China Labor Watch and other NGOs, these factories often flout labor regulations, and can have appalling working condition, resulting in a number of cases of suicide. Again, companies like Apple and Samsung have been brought under pressure to improve the working conditions in their suppliers.

A company's corporate social responsibility should extend to its choice of sub-contracting company. Some companies believe they have a moral responsibility. Others are seeking to protect their corporate reputation or brand. They fear a boycott of ethically minded Western consumers.

In summary, the advent of supply chains has indeed opened up new development opportunities in Asia. But Asian countries must be careful not to get stuck doing a low value added process forever. They must seek to climb the value added ladder by improving their human capital and technological capacities. They must also remain a competitive and reliable supplier. Companies from advanced countries must also take supply chain management seriously, by ensuring that their suppliers are law abiding and ethical in their work practices.

The development of these manufacturing supply chains has been described a "unbundling" the factory by Professor Richard Baldwin. In a similar vein, the office is now being unbundled.

A growing number of electronically deliverable services are now being outsourced to Asian countries like the Philippines and India, taking advantage of their excellent English language skills and lower wage costs. This began with the outsourcing of call centers, but now tele-marketing, accounting, legal, human resource management and software development services are being outsourced. This is known as business process outsourcing (BPO).

Some of the policy challenges of developing a competitive BPO sector are similar to the manufacturing case. The industry needs the government to provide the necessary IT infrastructure. The countries should aim to climb the value added ladder, by strengthening the education of workers, especially in the IT, accounting and legal areas.

This BPO sector is very beneficial to the Philippines and India, although the BPO workers tend to higher educated. Both these countries still need to develop a competitive manufacturing which can absorb their vast number of lower skilled workers.