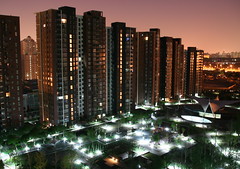 Despite increasingly strict regulations, investment in China's real estate industry, as well as sales totals and prices, still achieved high levels of growth last year. During the Communist Party's third plenum, the new leadership announced reform measures in a number of areas, but many people were left puzzled by the fact that the real estate sector - the source of the most vocal public complaints - didn't appear to fall within the scope of these new policies.

The real estate bubble continued to grow last year, furthering the unequal distribution of wealth and increasing social tension, and leading many to question the determination of the government to build a more just and equitable society.

The latest official figures show that, last year, national investment in real estate development hit 8.6 trillion yuan (HK$11 trillion), an increase of 19.8 per cent over 2012, accounting for about 20 per cent of investment in fixed assets.

It is well known that the real estate bubble is harmful to the Chinese economy because it attracts and holds capital, talent and other resources that could be better used to develop other important industries, adding to the difficulties of transforming the nation's economy. In some ways, it's like an unexploded bomb; handled carelessly, it could cause economic devastation or, at the very least, lead to an incident similar to the US subprime mortgage crisis.

Many people are concerned that the new leadership has introduced very few important regulatory measures to deal with this impending crisis. The third plenum said little on the regulation of real estate, save for the need "to speed up real estate tax legislation and introduce timely reforms".

Previous leaders tried hard to regulate rising real estate prices, without success. By contrast, the current leadership seems intent to downplay the importance of this issue. Li Keqiang has never publicly mentioned the real estate industry since he became premier, while President Xi Jinping only briefly discussed the core rules for real estate policy last October during a Politburo study. Still, some of the government's recent policies do provide clues about these core rules.

Overall, the government aims to build a market-based system for housing to meet multiple levels of demand, while ensuring the provision of basic housing. This is consistent with the main thrust of the third plenum, that "the market must play a decisive role in allocating resources". The objective is to ensure that everyone's basic housing needs are met.

In other words, the government will not directly intervene in the market, but it will provide basic housing for low-income groups through the development of public rental housing, low-rent housing, and the transformation of various shanty towns.

In addition, the government will work to establish a standardised and stable housing supply system. While increasing supply, it will be necessary to make adjustments as people's needs change. Meanwhile, the total supply of land for housing should be increased, with priority going to building affordable housing.

Clearly, real estate policy has undergone a fundamental change. However, many developers and investors believe leaders are not really talking about "regulation", and therefore mistakenly think policies are becoming looser.

I believe senior leaders realise the significant dangers of a property bubble, and this will be reflected in real estate policies for this year.

Leaders will seek to avoid causing a massive shock to the market with the implementation of any new policies, considering the impact property has on the overall economy. Last year, for example, income from real estate and related land sales and construction was 6.6 trillion yuan, accounting for 36.5 per cent of national public finances, also contributing more than 50 per cent of local government revenue. Therefore, new policy implementation will be gradual and modest. This has contributed to some of the misunderstanding among the public.

Second, once the overall objectives are formally determined, that is, to meet the basic needs of the public, investment behaviour in the market will be limited. The core reason for China's real estate bubble lies in the fact that the market has deviated from the basic demand and supply relationship and become an investment market. Thus, the most effective policy will be to let the market return to its fundamental state; this explains why Xi said regulating housing demand is important.

Also, one should not underestimate the power of the decision during the third plenum to accelerate the introduction of property tax legislation and other measures. Property taxes are implemented in many countries and have proved very effective. They not only inhibit investment behaviour, but also create a substantial income base for local governments. Pilot tax schemes have been running in Shanghai and Chongqing since 2011. Expanding the scope, and the level of tax, will have a profound impact on the market.

In addition, some analysts believe that the plan to create a nationwide unified real estate registration system may lead some people to sell their real estate holdings, particularly those obtained through unlawful activities.

Finally, while the three super-tall skyscrapers in Shanghai's Lujiazui financial district may dwarf those in New York, London or Hong Kong, we should remember the reality: China is still a developing nation no matter how many tall buildings it constructs. Real estate's sole purpose should be to meet the people's basic need for living and working; there are many other, more important issues that need our attention before we can move towards a higher level of civilisation.

This article was first published in the South China Morning Post, on April 11, 2014.