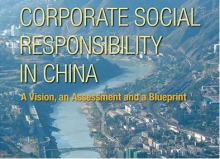 Here are the key points from the interview:

What does CSR mean in China?

The CSR issue is not as new in China as some people would think. China has a long history of entrepreneurial responsibility, as shown by the study of cities and communities governed by a local ethos.

This was and is somehow still the case in Hangzhou, Suzhou or Wenzhou, for instance. Linked together by the imposing Yangzi water system, merchants’ and entrepreneurs’ communities developed a form of capitalism that was not very different from that in the Rhine Valley.

Solidarity, guild culture, philanthropic endeavours, responsibility towards the rich but fragile aquatic environment that was making the economy strive. These values were shared in both the Rhine and Yangtze Valleys.

When it first appeared in China, in the course of the 1990s, the Western notion of CSR was met with skepticism, not only among entrepreneurs but also among many economists. Some argued that this was a typical Western notion that could potentially be used for reining in China’s path to prosperity.

However, things started to change when growing concerns gradually emerged about the side effects of the developmental process. Thus, in 2006 Nanfang Zhoumou (Southern Weekend), a leading publication in China, started to rank the CSR performance of Chinese companies and the world’s Top 500 international companies operating in China. This coincided with a number of initiatives, such as the launch of the CSR China Forum, held for the first time in Beijing in 2005.

Rising inequalities, major ecological accidents, well-publicized cases of corruption, the plight of the migrant workers and other issues were not only challenging some of the tenets of China’s course of development. They were igniting a debate about the social impact of foreign and national companies in China and, specifically, the entrepreneur as a role model.

Nowadays, CSR concepts and practices are fairly well known and discussed among the new generation of Chinese entrepreneurs, even when their relevance to the national context and their feasibility may still be questioned.

There are some cultural and societal traits that influence the reception, understanding and implementation of CSR in present-day China: (a) continued importance of the role of the state; (b) profit and growth seen not only as priorities, but also as being in potential conflict with other imperatives; and (c) short-term concerns taking precedence over sustainability issues.

At the same time, some policy areas have been progressively shaping the development of a pragmatic CSR culture through the emphasis put on safety, energy consumption or social harmony.

To what extent are Chinese companies elaborating CSR programs? What are the challenges?

Large Chinese companies are now indeed elaborating CSR programs. But this does not mean that the CSR imperative has become already truly anchored into their entrepreneurial culture.

Still, it is interesting to observe their attempt at developing a specific discourse and approach. For instance, trying to express its CSR and sustainability priorities, the Shanghai-based SPD Bank has chosen the words of “Green”, “Happiness” and “Responsibility ”, referring explicitly both to the 12th National Plan and to Chinese traditional values.

Though such exercises have obvious limitations, the SPD report conveys the company’s willingness to focus more on human values, and care for common people, the weak and the marginalized. It also emphasizes the necessity of rethinking one’s values, methods and priorities, based on an ethics of care and sharing, for a corporation to become a global and sustainable player. This testifies to a shift that may ultimately reconcile traditional and modern China on the basis of the sustainability imperative.

The change is much slower when it comes to a certain number of traditional, well-entrenched state-owned enterprises. When there is a conflict between long-term benefits and short-term profits, there is often an almost automatic preference given to the latter.

It is indeed a strategy followed by the largest and most innovative Chinese companies to use CSR to help them become global brands.

For instance, in 2011, Suning, the leading retailer of household electric appliances in China, established the first environmental responsibility model applicable to Chinese retail enterprises. It aims at the formation of a green value chain and a measurable environmental management system. Suning cooperated with the China National Hardware Association and over 20 kitchenware and sanitary-ware brands to carry out a green kitchen plan and speed up the popularization of energy-efficient products.

China Mobile is another case in point. It has introduced Social Accountability 8000 International Standard (SA8000), ISO 14000 and other CSR standards into its supplier-rating criteria in the process of bidding. It is terminating the contracts of some suppliers unable to meet its environmental requirements, as well as conditions for employee working hours, salaries, and safety and health conditions.

The reports of these companies reflect a global strategy. At the same time, they influence in some respect smaller companies. The stress now put on the entirety of the supply chain is the main development having occurred in the field of CSR in China during the last 2 to 3 years.

The book, "Corporate Social Responsibility in China: A Vision, an Assessment and a Blueprint", is published by World Scientific, a Singapore-based publishing company.

It has been available in Asia since end-November, and will be available in the rest of the world from January 2014. See the link below for ordering details.

Professor Benoit Vermander teaches in the School of Philosophy of Fudan University, Shanghai, where he is also the academic director of the Xu-Ricci Dialogue Center. Since 1992 he has lived continuously in China and Taiwan, and directed the Taipei Ricci Institute for Chinese Studies from 1996 till 2009, when he joined the Fudan faculty.

As he was working on some ethnic minority groups of southwest China during the second half of the 1990s, Benoit Vermander became interested in the question of the diverse cultural resources that China could contribute for fostering a specific model of sustainable development. Having held a number of conferences around this topic with different institutions, he chose to concentrate on the role played by corporations, alongside the state and civil society.

- Corporate Social Responsibility in China: A Vision, an Assessment and a Blueprint by Benoit Vermander. World Scientific, Singapore. 2013