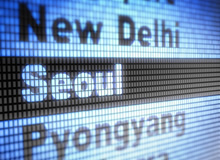 Developing Asia has been sailing through the global economic crises these past few years.
But what do the region's longer term economic prospects look like?

Any country with a low level of development relative to its long-run or steady-state potential can realize that potential if it employs sound policies and institutions. This means that a poorer country is expected to grow faster than a higher income country as it can build up physical and human capital, and technology.

In fact, the lower is the level of development relative to the steady state, the higher subsequent growth tends to be. This is the benefit of backwardness. So while the Chinese might brag about their very high growth rates these past few decades, this is a reflection of how far behind China was, as well as of course its excellent policy reforms.

Poorer countries can absorb knowledge and technology from more advanced countries. While innovation can be useful at all levels of development, it only becomes essential for growth when a country has reached the global technological frontier -- as is the case of Japan.

This catchup process has been behind developing Asia's high growth rates in per capita income these past 3 decades. Real per capita income expanded more than four times during the period, while average global income registered a less than a two-fold increase.

Developing Asia's income per capita still remains below the global average, but it is rapidly catching up. In 1980, the income of the average Asian was just over a quarter of the world average, and by 2009, it had risen to nearly two-thirds.

The ADB analyzed developing Asia economic convergence through an extended version of the neoclassical growth model that incorporates the role of human capital and technology catch-up. It found that the region's rapid growth these past 3 decades was mainly due to capital accumulation. The contributions of education and total factor productivity (TFP) were relatively limited. It was mainly in China where TFP growth contributed the most to GDP growth between 1981 and 2007. Improvements in TFP were also significant in Hong Kong, Korea, Singapore and Taiwan.

ADB's projections show that, consistent with developing Asia's progressive convergence, GDP growth rates will be consistently lower over the next 2 decades than in the past. Indeed, GDP growth rates are projected to decrease between 2011-2020 and 2021-2030. Following high rates of capital accumulation in the past 3 decades, the marginal productivity of capital is set to decline. And with aging populations and declining fertility, the demographic dividend is likely to wane for most economies.

The only way for Asia to continue growing strongly would be to raise productivity so as to offset the slowdown in growth caused by the convergence phenomenon. This would require policy reforms like more market openness, improved education, and greater investment in research and development.

The ADB estimates a scenario where reforms to education, property rights and R&D partly offset the slowdown due to convergence. GDP growth rates would be more than one percentage point higher in China, India, Pakistan, the Philippines and Vietnam. Developing Asia could account for close to two-thirds of the world economy in 2030, almost doubling the current 34% share.

But as Japan has shown, reform is easier said than done. Japan never managed to achieve full economic catchup. And judging by the inefficiencies in Chinese investment, it may have trouble too.