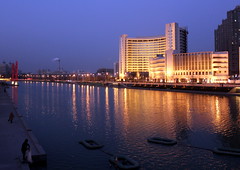 Glen Robinson argues that the international container ports in China are among the best in the world.

International trade has benefitted enormously from the introduction of containers over the last 50 years, as it has reduced the costs of transporting goods, simplified the actual transportation, significantly reduced losses due to pilfering, and has been increasing at a useful rate.

A 2017 investigation by FT Investigation [London] “How China Rules the Waves” [1] into the Chinese expansion of the ports network has been reported and is quoted within this evaluation. In this study we have taken a superficial global view of the ports in China and the international ports as many of those are Chinese connected container ports.

The Covi-19 pandemic has caused some disruption to the supply lines and that includes the ports as they are an integral part of the supply chain, and consequently, the shipping line schedules are out of kilter, and shipping lines are unable to fully utilize their capacity, as their ships are held up for longer periods in ports or waiting to get into port. Some shippers are skipping some ports altogether.

Also, the Covid-19 pandemic has adversely affected every country, but the containerized ports have been less affected than originally expected. The shipments of petroleum products fell by 7.7%, and shipments of dry goods and minerals by 1.5% and containerized cargoes fell by 1.1%, for the year 2020, and the reasons have been hypothesized that the lower-than-expected result was due to the Covid being unfolded at different times and with differing severities. [2]

China has 34 container ports in-country and 25 of these are regarded as significant international ports, and internationally, investments or other arrangements in an estimated 100 + ports, at least one in every continent, except Antarctica.

The information on the global investments has been compiled from several sources as there is no single source or platform published by the Chinese authorities. There is no attempt to compile or publish the list in this document.

China relies increasingly on maritime transport and has over the last several decades developed a significant portfolio of both fully owned ports as well as investments in selected ports. This is seen as the maritime extension of the Belt and Roads Initiative [BRI] which is an upgrade and significant extension of the original Silk Road. It is a global infrastructure strategy developed and adopted by the Chinese and is a strategy which is intended to create connectivity and cooperation across the corridors which connect China to Indo China; Eurasian countries; Indian subcontinent; central and western Asia; and Russia. The OECD has an excellent overview of the initiative and its effects [2]

The investments are significant primarily targeted to large infrastructure projects which the individual countries almost certainly could not develop the infrastructure without the financial and logistical assistance and support of an outside entity such as China.

The ability and quality of ports has been evaluated by a number of qualified persons, and in the following paragraphs an overview of the ports is presented, and the main focus is the Chinese ports.

The container ports based on the Chinese mainland are as follows

While this number of ports may be regarded as an “over-kill” it should be noted that the country is physically large, has a population of over 1.4 billion people, and is a major trading entity.

The maritime strategy is to build connectivity and cooperation with the main corridors leading to the major and developing countries, and for that strategy to be effective the maritime transport system is essential


RANKING OF THE QUALITY OF INTERNATIONAL PORTS

Attempts to develop a universally accepted scientific basis for comparison of port “quality” date back to the 1950’s, however, in 2020 the World Bank responded to the requirement, and they, in conjunction with IHS Markit, developed a relevant method and termed it Container Port Performance Index, CPPI 2020. A detailed description of the definitions, the factors included, the comparative relevance of those factors, and the mathematical treatment can be found in “The Container Port Performance Index 2020” (3) published by World Bank Group and IHS Markit. The analysis has been applied to 351 international container ports and the results published [3]. A synopsis of the results is in the following table

On the CPPI ranking, 4 Chinese owned ports are in the top 10, and this analysis does not show the relative position of other ports which may have China as an investor. It is notable that Taiwan and Hong Kong are also in the Top 10.

Throughput is a function of several factors, including location, efficiency and probably reliability. Lloyds (4) have undertaken a comparison of 100 ports based purely on throughput. A summary of the throughput for 2020 placed Chinese ports as occupying 7 of the top 10 positions as can be shown by the following table.

It is interesting that 7 of the top 10 ports for annual throughput are in China, which tends to justify the large number of Chinese based ports. It is notable that Hong Kong is also in the Top 10.

The total global investments by the Chinese authorities or Chinese companies are not known; therefore, the total coverage is not known. However, the positioning of the some of the more public and more internationally important Chinese investments, certainly seem to have a geopolitical element to them. While these investments have considerable commercial and strategic importance, it could be said that the geopolitical issues are equally important, and critics of the maritime BRI use the geopolitical issues as a basis for their criticism.

While there is only one offshore investment which has a military component [Djibouti], even so this level of geopolitical coverage does not sit comfortably with every other player. A former [non-Chinese] Intelligence officer was concerned as the ports could be used to collect naval intelligence “You can track the whereabouts of ships and communications. You can do whatever you want. You are the landlord here.” (5) Perhaps somebody should advise him that a 12-year-old lad sitting on the hill opposite, can also monitor and note the passing of military shipping.

RANKING BY “TIME IN PORT”

In attempting to provide an accurate overview of the performance of the China ports, an analysis for the year 2020 has been undertaken [6], and the results can be summarized for a selection of ports.


It is notable that the average of the ports in China appear to be more “customer friendly” than the global average on the basis of Time in Port which may be surprising given there are many ports of international standard and they have a very high turnover of containers.

The maritime transport industry is one which is incredibly important to global trade but receives very little attention from most businesspeople. Even so, there is a plethora of information, prepared by qualified, competent people in institutions which have prepared excellent articles on the industry, its strengths and weaknesses, its past and future, and undertake comparative analyses of the various participants in the industry.

China has been the subject of some criticisms, however this analysis of some of the operating factors clearly demonstrates that the international container ports in China are among the best in the world.

China has been taking an international view and its maritime industry has adopted the same strategy which has been adopted for the Silk Road and then the Belt and Road Initiative (7) (BRI), and it appears to be effective.

Due to lack of definitive information on the full range of international investments in ports, it has not been possible to comment on the full range of invested ports. However, those ports which are known to have significant Chinese operating influence are among the best in the world, as well as have excellent geostrategic features. If the strategy and operating functions are also applicable in the other owned ports, then it may be concluded that they have excellent operating situations.

There are a number of commentaries in the relevant press, and the general consensus is that Chinese interests either own, or have a shareholding interest in, 100 container ports in at least 63 countries (8) and those numbers are growing reasonably quickly.

It is almost a case of “watch this space”

This publication is an adjunct to a recent publication entitled Australian International Container Ports, as during the research for it, it became obvious that the Chinese companies have special interest and abilities in the global maritime transport industry.

The series of articles was undertaken to provide an overview of an industry which rarely receives comments and hence the average businessperson is unlikely to have any feeling or understanding of the industry, even though it is fundamental to Australia’s economic pattern.

It is a vibrant industry, has undergone some structural changes and is destined to continue making changes into the immediate future. It is an interesting and engaging industry.

Email: This email address is being protected from spambots. You need JavaScript enabled to view it.

Glen Robinson is a co-founder and director of Asean Focus Group with Peter Church which was formed in 1990 to provide advice and assistance to those organisations which wished to take a commercial presence in ASEAN and other Asian countries. A number of years ago the company entered into a joint venture with the Venture Group and now both jointly trade as AFG Venture Group.

Email: This email address is being protected from spambots. You need JavaScript enabled to view it.

Thanks are offered to Mr David Bendall, CEO of MariTrade (http://www.maritrade.com.au/) for his advice and guidance in the preparation of this article

The views expressed as solely those of the author, and not of any companies or organisations mentioned.