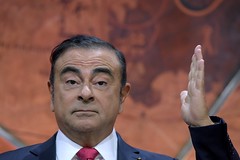 Collision Course: Carlos Ghosn and the Culture Wars That Upended an Auto Empire

Collision Course charts the rise and fall of Carlos Ghosn. It delves into the nitty-gritty and complexities of the international business and political relations.
The Carlos Ghosn affair is by now the stuff of legend. Nissan, a failing Japanese motor vehicle company, was saved twenty years ago by Ghosn’s brilliant leadership on behalf of Renault, which invested $5.4 billion in the bailout. As Ghosn transformed Nissan, he transformed himself into a virtual corporate dictator who set his own terms and made his own decisions.

Following the French government’s demand of Ghosn that the Alliance be made “irreversible,” Ghosn’s Japanese colleagues and the Japanese justice system brought him down with charges of financial misdemeanors. Believing he had no chance of defending himself, Ghosn managed to escape Japan in a musical instrument case bound for Lebanon, where he is still living as an international fugitive. But there is much more to the story, as argued by Hans Greimel and William Sposato in Collision Course: Carlos Ghosn and the Culture Wars That Upended an Auto Empire.

The story starts in 1999, when Renault took on the challenge of saving Nissan – an impossible dream according to most industry observers. This was done through an “Alliance” rather than a merger, with the two companies linked by cross-shareholdings. Renault took a 43.4 percent stake in Nissan, while Nissan, the company in need of a bailout, held only a 15 percent stake in Renault. Putting politics into the mix was the French government’s holding of 15 percent of Renault’s shares. Adding spice to this international arrangement was Renault’s appointment of Carlos Ghosn as the turnaround agent – a man born in Brazil of Lebanese extraction, educated in France, who had proved his mettle at Renault and before that Michelin, the French tyre manufacturing company.

Ghosn would demonstrate his brilliance as he returned Nissan to profitability within 12 months by breaking many rules of Japanese corporate life. He cut jobs, plants, and suppliers, while shaking up Nissan’s lifetime employment and seniority management system. Though he earned the nickname “le Cost Killer,” Ghosn was widely praised and admired in Japan and the world over for the great success story that he engineered. And yet many in Japan, where economic nationalism still reigns supreme, felt uncomfortable with the Alliance arrangement. The virtual surrender of a national champion, even after its saving, to a foreign company – especially one partly owned by a foreign government – stuck in the throat of many Nissan staff members and Japanese government officials.

Perhaps the real shining point of Ghosn’s management was making the Alliance work. Each Alliance member was notionally independent, although they were all led by Ghosn. The Alliance offered great advantages, as many common parts, components, and shared knowhow facilitated economies of scale by companies working together. Ghosn thus looked for opportunities to expand the Alliance, and managed to do so by including the troubled Mitsubishi in 2016.

But below the surface, the Alliance was somewhat shaky. Disagreements between Nissan and Renault staff were frequent. As Nissan began outperforming Renault, it bridled at being the junior partner. Ghosn faced growing challenges reconciling differences between the different companies. And the French side (Renault and the government) was increasingly irritated at the seeming lack of gratitude for its efforts in saving Nissan.

With the risk of the Alliance unravelling after Ghosn’s retirement, Renault extended the contract of Ghosn, then 64 years old, in 2018 for another four years on the condition that he make the Alliance “irreversible.” This left Ghosn with the challenge of ensuring such irreversibility. At the time of his arrest, he was working on a holding company arrangement as a new structure for the Alliance. The Japanese side – both the government and Nissan staff members – was worried about the prospects of a merger which would threaten their independence. Since the book was written, the Alliance partners have been working hard to recover after the Ghosn affair, but it seems that the inherent tensions in the Alliance remain unresolved.

These are the key elements in the background to Ghosn’s arrest as he deboarded from his corporate jet on 19 November 2018. He was immediately imprisoned, given very little access to his lawyer, wife, and others, and accused of a wide array of financial crimes. Allegations included hiding the size of his salary, hiding plans to receive vast payments in his retirement, and using Nissan financial resources for personal purposes. At the same time, his arrest seems to have been the product of collusion between Japanese insiders at Nissan and law enforcement agencies.

While most people from Ghosn down were completely blindsided by his arrest, in retrospect it now seems that he was on an inevitable “collision course” – between Ghosn and Japan, Nissan and Renault, France and Japan, government and business, and between Western and Japanese governance. And Ghosn, for all his brilliance and fortune, was left stranded. He was admired in Japan but never accepted – few foreigners are. Nor was he part of the French establishment. Moreover, he had a prickly relationship with French President Emmanuel Macron.

Much of the book seeks to contextualise the Ghosn affair by taking us into the world of Japanese justice, politics, corporate governance, business culture, foreign business experiences in Japan, as well as the role of government in international business and the global motor vehicle industry. For people interested in Japan, this book provides an excellent overview of the Japanese economy, business, politics, and international relations over the past few decades. With Ghosn and Nissan being a virtual case study, the book is uniquely insightful.

As the book notes at length, Westerners and Japanese are sharply divided in the analysis of the Ghosn affair. Westerners see Ghosn as being poorly treated by an ungrateful country with an authoritarian justice system, which routinely discriminates against foreigners. Japanese typically believe Ghosn to be unequivocally guilty of financial crimes and disrespecting the mores of their country, deserving to be punished. The authors quite rightly try to avoid taking sides.

All that said, the Ghosn affair and the excellent material in this book warrant deep reflection. For its part, Japan is seeking to distinguish itself from authoritarian China and forge ever closer political partnerships with Australia, India, and Europe, building on its alliance with the US. In these circumstances, there is surely a question as to how long Japan can remain such an outlier when it comes to justice, corporate governance, and political governance more generally. The treatment of Ghosn, arguably the most transformative foreigner in modern Japanese history, is simply mind-boggling.

For middle power countries like Australia, which are forging deeper partnerships with Japan and other Asian countries like India, Singapore, and Indonesia, the Ghosn case highlights the need to strengthen its Asian knowledge and competence. This book should be essential reading for those seeking to understand Japan and Asia more generally.

This article by John West was first published by the Australian Institute of International Affairs on 14 February 2022.