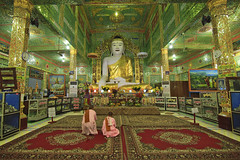 THE RECENT HISTORY OF MYANMAR

As Myanmar struggles with bloody instability, Glen Robinson reminds of the recent history of this country.

MYANMAR, the beautiful country which was under dominant military rule for almost 50 years and is trying to find its way in the global marketplace.  It was just 2 decades ago that democracy raised its head and changes began to occur, and now there appears to be a military takeover to return to dominance by the military.  There has been an increasing amount of column inches devoted to the changes which have occurred, and as one who has had a commercial contact with the country since 1994 when we opened our first office in Yangon, and in 1998 when we produced the first Myanmar Business Guide, the changes which have occurred over the last several years are breathtaking in their scope and speed.

These words were originally written in 2016 and demonstrate the dramatic changes which have taken place in that country.

Unfortunately, since that time, almost all changes stopped. In reviewing the background to the coup, it is relevant to review the recent history of the country.

For a country which is so physically beautiful, and people who are so gentle, accommodating, and pleasant, the history of the country is quite chaotic and violent. It was after the Second World War that Myanmar, then known as Burma, gained its independence. For almost 20 years the country enjoyed significant economic growth; however, the military coup in 1962 marked the transition to military leadership in a form which was called the “Burmese way to Socialism”.  It was a period of intense repression and violence, and the potential unrest as up to 14 ethnic groups sought independence from the control of the central government.  This added to the violence in the country.

The result of the referendum was a bicameral parliament of the lower house [Pyithu Hluttaw] and the Upper House [Amyotha Hluttaw] in which 75% of each were to be democratically elected and 25% of the seats were reserved for military appointments. This was a useful transition structure, as it had been successfully applied in other countries, particularly Indonesia and Thailand, and the previous colonial ruler the United Kingdom still retains an elected lower house of 650 members, and a fully appointed upper house of approx. 800 members.

The national General Election in 2010 was the first visible sign of democracy in Myanmar, and while the party led by Aung San Suu Kyi boycotted it, and there were severe and probably deserved criticisms of the process, the country did hold the elections. Then began the proposed task of an accelerated opening of the economy and attempting reconciliation with dissident groups and the wider global community, however, extraordinarily little of this was actuated.

The by-election conducted on April 1, 2012 to fill the vacancies created by ministerial appointments was regarded as the most promising exhibit for real change as the ruling SPDC, the front for the military or Tatmadaw, were soundly beaten by Aung San Suu Kyi’s party, the NLD.  The election was overseen by 150 invited foreign observers, who reported that the election was clean.

In the scheduled 2015 election, the NLD won a sweeping victory, taking 86 percent of the seats in the Assembly of the Union (235 in the House of Representatives and 135 in the House of Nationalities)--well more than the 67% supermajority needed to ensure that its preferred candidates could be elected president and first vice president, in accordance with the Constitution. However, these Presidential candidates had to be consistent with the Constitution which precluded Aung San Suu Kyi being President, due to her foreign husband, foreign children and possibly her period of residence outside the country, so another structure had to be developed and this was the “State Counsellor”.

The scheduled 2020 election was conducted and the NLD swamped it, to the point the Tatmadaw [military] claimed there was electoral fraud, and became quite vociferous in their claim, and used the claim to support the ensuing Coup.


Myanmar’s Place in the World.

After the Coup most of the western world had implemented some form of sanctions, which made business challenging, however as a direct result of the relatively clean elections and by-elections, most countries moved to soften or extinguish the sanctions. Australia was one of the first to do so. The move to acceptance is evidenced by the visit by Hilary Clinton and the surprise visit by the Prime Minister of UK in April 2012, the visit to many countries, including the USA by the then President, U Thein Sein

Myanmar hosted the 2013 South East Asian Games [SEA Games] which were under the regulation of the International Olympic Committee (IOC) and the Olympic Council of Asia. This brought the country and its administration very much under the spotlight.

The 22nd World Economic Forum on East Asia was conducted in the capital during June 2013. About 900 delegates from more than 50 countries were in Naypyidaw for the three-day forum, as Myanmar wooed foreign investors. Myanmar held the position of Chairman of Asean from 2014.

The country was being almost overrun by trade missions, investment visits and fact-finding missions by businesspeople, investors, and politicians. The tourism sector was struggling to keep up with demand.

But all of that changed with the Coup which occurred on Feb1, 2021, when the Tatmadaw dismissed the elected government and installed a complete military government.  See Part 2, Myanmar Coup, Feb 2021

Glen Robinson Glen Robinson is a co-founder and director of Asean Focus Group with Peter Church which was formed in 1990 to provide advice and assistance to those organisations which wished to take a commercial presence in ASEAN and other Asian countries.   A number of years ago the company entered into a joint venture with Venture group and both trade as AFG Venture Group.  Glen is a director of the Australia Thailand Business Council and a Councillor of the Australia Institute of International Affairs NSW.  The views expressed in this article are solely those of the author and not of any of the companies or organisations mentioned.
Tags: asean