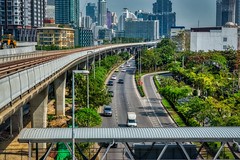 The case for Investment in SouthEast Asia

Glen Robinson makes the case for investing in Southeast Asia.
This is in unusual times. We are fast coming to the realisation that we cannot be isolationist and self sufficient in this global world, and there are significant opportunities for us in our region, as well as the commercial world.

The developing Asian region covers almost 50 countries, and contain 60% of the world’s population, which is growing at twice the rate of the rest of the world, consumes about 70% of the world’s steel and cement,  is the world’s production centre, will continue to be the world’s food basket, and has a diverse range of countries with different levels of population, ethnicities, religions, history, aspirations, cultures, economic development and economic growth rates.

In recent years Australians have tended to regard this region as a homogeneous entity without recognising the massive differences, and companies have been reluctant to invest and establish operations in this region.  It has not been uncommon for the stock market to castigate a company which announced a market entry to Asia, but this is beginning to change albeit slowly, and investors are beginning to see the developing world as being prospective.  Additionally, the changes precipitated by the advent of the Covid 19 Virus, and the need to expand the market and redefine the supply chains, Asia comes to the forefront of the mind.  Asia has markets which can only be described as developing, and hence may not have the distribution channels or other attributes which are normally associated with a new market.


WHY SHOULD WE ENGAGE WITH EMERGING MARKETS?

There are a number of very important and attractive attributes which provide the reasons that Australian companies should be investing in cross-border activities.

One is the current state of Australia’s globalisation. There are very few Australian companies which can be regarded as truly global, and by global, the company should be in at least 20 countries, and on at least 3 continents. It would be hard to find 10 companies in that category.

Compare this with a country like Sweden, half the size of Australia, not regarded as particularly innovative nor adventurous, but you would find more than 10, which would meet the criteria of being Swedish and global, and the same could be said for the Swiss and many other smaller country companies.

However, within Australia, foreign companies have taken equity positions, and in almost every sector the significant companies are foreign-owned or foreign controlled. The French, Swiss and Danish have taken significant equity positions inside Australia. Over the last several years, various companies including the Canadians, South Africans and Spanish and the Singaporeans, have acquired the distribution companies in the market.

That is not a very pretty picture. It paints Australia as a country which is seen as an investment target, with investors taking advantage of resources and skills which are available, and the relatively small market. Unfortunately, Australian companies are not reciprocating and are neither acquiring nor creating businesses in other markets. If this trend continues and we choose not to invest internationally, the result is clear, Australia earns little income from overseas investments, but must pay dividends, royalties, and technical fees to foreign companies, which may or may not add to the tax collection pool.

THIS WAS NOT ALWAYS THE CASE

Such names as Monier, Boral, Pioneer, James Hardie, etc had significant businesses around the world, including in the US, Europe, South Africa, Asia. Also, the banking sector with ANZs ownership of Grindlays, and Westpac’s development of the finance leasing company AGC were further examples, and there were other sectors which were becoming globalised and creating wealth for the Australian economy through their international activities. At the time these were brave and incredibly entrepreneurial actions and many of these companies were highly regarded, had developed a level of professionalism which was among the world’s best and were continuing to grow. That has changed.


WHERE ARE WE NOW?

We have some extraordinarily strong indigenous companies; however, the culture and objectives of the companies seem to be competitive with each other, which means accommodations are reached and the end result is minimised competition. To be a commercially competitive country, we really need strong companies at home to provide the platform for the cross-border activities, and the skills, strategies and managerial activities should be directed towards developing those overseas markets.

The skills and knowledge accumulated in several markets allows the development and expansion to continue. Further expansion becomes easier as experience develops, but also the branding supports expansion into new markets.

There are both positives and negatives associated with targeting emerging markets, but the positives far outweigh the negatives. From a commercial perspective some of the positives include:

· Generally, they provide large and unfulfilled markets with a population which is growing in both number and purchasing power, but which may or may not have the developed distribution channels.

· Generally, there is a wide acceptance of innovative and entrepreneurial actions, and you and your services may receive a higher level of acceptance than you might otherwise expect.

The growth in the overall economy will stimulate growth in your specific market to your advantage.  This is a factor too often overlooked, as the growth in consumption generally gives the newcomer some time to adjust the strategy.


WHAT IS THE PRESENT POSITION?

It is difficult to estimate the number of Australian-based companies which are undertaking cross-border activities but certainly in Asia there are many thousands which are in operation, mainly as export activities. In relation to investment, several years ago, there were just under 200 Australian public companies with operating investments in each of Indonesia and Thailand, and in relation to SME’s, informed estimates were made that there were 750 SMEs in Indonesia and 1250 SMEs in Thailand each with Australian heritage, and each of these companies were operating within the requirements of the local authorities and seemed to be particularly successful.

We have all heard the dreadful war stories of those that fail, or have had a less than illustrious beginning, and many have withdrawn from specific markets. But at the same time, we must also note that there are many winners to be seen here, that some of the household names are winners right through the Asian region and other regions.

The case for cross border investment is compelling both from a corporate and national perspective. The process need not be difficult, and certainly the markets are different, but those differences can be mitigated, and advantage can be taken of the differences.

Glen Robinson Glen Robinson is a co-founder and director of Asean Focus Group with Peter Church which was formed in 1990 to provide advice and assistance to those organisations which wished to take a commercial presence in ASEAN and other Asian countries.   A number of years ago the company entered into a joint venture with Venture group and both trade as AFG Venture Group.  Glen is a director of the Australia Thailand Business Council and a Councillor of the Australia Institute of International Affairs NSW.  The views expressed in this article are solely those of the author and not of any of the companies or organisations mentioned.