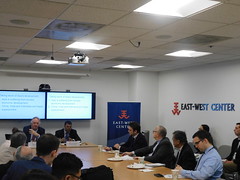 Reviews of Asian Century … on a Knife-edge

Here are some highlights of the reviews of John West's new book, "Asian Century ... on a Knife-edge"

"West’s analysis is timely, insightful, and highly readable. Many recent studies have focused on specific problems, such as Asia’s yawning infrastructure gap and the implications of artificial intelligence and robotics. West paints with a much broader brush. He provides welcome coverage of the trampled rights of ethnic minorities, women, children, and the LGBT community.
...
Asia’s shortcomings are many, and its challenges daunting. West makes a compelling case against excessive exuberance about the region’s future. Solid growth expectations this year in all major regions have fuelled global optimism. West provides a timely reminder of how easily things could unravel."

"In his new book Asian century… on a knife-edge, John West challenges the popular proposition that the 21st century will be the ‘Asian century’.
...
The book should be of interest to all those interested in fundamental factors affecting economic and political development and the prospects for Asia as a whole over the longer term. It is written in a highly accessible style and provides a persuasive case that it will be difficult for Asia as a whole to escape the ‘middle income’ trap that is a general feature of economic development.”

“In a wide-ranging analysis of all the countries of Asia, John West explores in his new book “Asian Century…on a Knife-edge” seven major challenges facing Asia, arriving at a somewhat negative conclusion of this region’s ability to overcome them.
...
The author ... clearly has an encyclopedic knowledge of a wide range of fundamental issues affecting all countries in Asia and his analysis focuses effectively on drawing out the significance of interconnections between the various countries. Not only is it an impressive comparative analysis, but it also provides a very valuable context for understanding the nature of development in any of the particular countries examined. Because of this it is essential reading for policymakers with exposure to the region."

"John’s book is an excellent overview of the development profile of the major countries in the region, and his question in relation to “where next” is appropriate.
...
Asia Century On a Knife-edge by John West is recommended for the person who wants a serious overview of the region in an open and readable style."

“Today, Asia is sitting on a knife-edge. The potential of the region to generate good and happy lives for its citizens is enormous. But the requirements of success and the risks of failure are equally enormous. This book argues that to realise an Asian Century, Asia will need to overcome seven key challenges in the 21st century.

John West debunks two common myths: that the region’s continued high growth is inevitable, and that it will be driven by a large and booming middle class. In sharp contrast to Asia’s “miraculous” past performance, West reminds us of the myriad problems facing its economies.”

"The user friendly writing style, and good eye for relevant detail and anecdotes, drawn from his long-time observation of the Asian scene, makes the book useful and relevant to policymakers, researchers, academics, students, and those who are concerned about Asia’s future prospects
...
His warning that the 21st century of Asian Century will not occur automatically, and there is no substitute for continuous reforms in economic, social, political, and cultural spheres should be welcomed by thoughtful and balanced observer. It deserves to be widely read, and discussed. His warning that Asia’s economic, political, and social elites need to moderate their behaviour to be consistent with national core interests is also well worth pondering seriously."