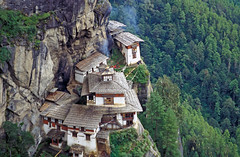 Bhutan's “gross national happiness” is improving. But if the country can diversify its economy, it could attract FDI that would improve its fortunes still further. John West reports.
The small Himalayan kingdom of Bhutan rose to global prominence when the concept of “gross national happiness” (GNH) was coined by its fourth king, Jigme Singye Wangchuck in the 1970s, as an alternative to gross national product. Bhutan’s unique measure of economic, social, and spiritual development continues to show further improvements, according to the 2015 GNH Survey Report of the Centre for Bhutan Studies & GNH Research.

However, Bhutan would also be a development success story based on more traditional World Bank indicators. Economic growth has averaged 7.6% a year over the past three decades, making it one of the world’s fastest growing economies. Poverty has been slashed from 60% of the population in 2003 to 15% in 2012, based on a poverty line of $3.20 a day, and the government has shared the benefits of rapid development through free access to health and education.

“Bhutan’s development accomplishments have been reliant on the state, including hydroelectricity projects, financed by borrowings from India, the main customer for this hydro-power. Although hydroelectricity projects are financially sustainable, Bhutan’s current account deficit now represents some 30% of gross domestic product,” says Yoichiro Ishihara, the World Bank resident representative in Bhutan.

The country has received only modest inflows of FDI, with Mountain Hazelnuts being the only 100% foreign invested company in the country. Some 10,000 farmers participate in the Mountain Hazelnuts project, which is supported by the World Bank’s International Finance Corporation and the Asian Development Bank, and demonstrates the transformative potential of FDI, especially in Bhutan’s poorer eastern regions.

“Looking ahead, Bhutan faces a number of challenges to generate sustainable and inclusive economic development,” says Mr Ishihara. “Youth unemployment is high, especially in urban areas, and Bhutan needs to diversify its economy, something which the government recognises, through promoting private sector development.”

The World Bank has recommended that the Bhutanese government strengthen its investments in human capital and physical infrastructure – including roads and information and communications technology (ICT) – while promoting reforms.

“Bhutan has much potential to exploit synergies between such investments in areas such as tourism and agriculture, and to attract further FDI,” says Mr Ishihara. “Improvements in ICT development could enhance agricultural productivity, as demonstrated by the Mountain Hazelnuts project, which benefits from a data platform that feeds information to and from farmers to ensure that hazelnut trees are healthy and productive. ICT capabilities could also improve transport logistics, and foster eco-tourism, while competitive access to electricity could enable mineral processing.”

“Bhutan could also be an ideal location for data centres in light of its weather, good electricity supply and political stability,” says Mr Ishihara. “Indeed, Bhutan enjoys very good governance, and low corruption. It was ranked 13th in the world in the 2017 edition of the Global Peace Index, easily the best of Asia’s emerging economies.”

This article, written by John West, was first published by FDI Intelligence, a Financial Times magazine.