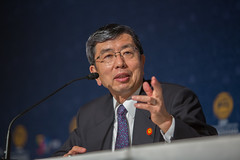 The competition between institutions to bridge Asia’s financing gap is both good news and bad. John West reports from the ADB’s annual meeting in Yokohama.
“Asia will need $1700bn per year in investments in power, transport, telecommunications and water through 2030. This is more than double our previous estimate,” Asian Development Bank (ADB) president Takehiko Nakao told the 50th Annual Meeting of ADB’s board of governors last week. And yet, as Mr Nakao reported, while ADB’s total operations last year achieved record levels, they only reached $31.7bn: a drop in the ocean relative to the region’s financing needs.

Stepping into this financing gap over the past year or so has been China’s motivation to create the Asian Infrastructure Investment Bank (AIIB). This new bank’s lending may be only slowly getting off the ground, but it already has more members than the ADB, and its authorised lending limit is also higher than the ADB’s. The new competition from the AIIB has seen the ADB streamline its lending procedures and rush to approve new lending.

“This funding race has many upsides,” says Robert Wihtol of the Manila-based Asian Institute of Management. “The competition is increasing the total financing available for Asian infrastructure. And having numerous financial institutions increases the scope for joint financing, which can spread the risk inherent in large projects.”

Mr Wihtol cautioned however that the race to finance Asia’s enormous infrastructure also has its downsides. “Geopolitical rivalries can see projects of questionable value get rapidly approved, without proper preparation or cost-benefit analysis, thereby saddling borrowers with burdensome debt, as we have seen in Sri Lanka,” he says. “And there are many examples of lenders not taking sufficient account of sovereign risk, most notably in the case of Venezuela. In this context, the advantage of multilateral banks like ADB and AIIB is that they conduct thorough risk analysis and due diligence.”

This article by John West was first published by FDI-Intelligence, a Financial Times magazine.

- Race to finance Asia's infrastructure heats up. FDI-Intelligence, 10 May 2017.