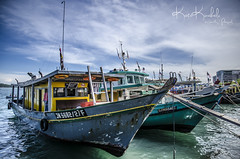 Light at the end of the corridor for Sabah

Sabah has long lagged behind other Malaysian states. However, an ambitious long-term development strategy is transforming the state’s infrastructure and improving skills to attract greater investment.
The East Malaysian state of Sabah is very rich in natural resources, and is strategically located in the middle of south-east Asia, on the northern tip of the island of Borneo. And yet, for many years Sabah has been Malaysia’s poorest state.

“In 2008, the whole state of Sabah was designated as one of Malaysia’s five economic corridors in order to better exploit Sabah’s immense potential, and to diversify the economy,” says Dr Mohd Yaakub Johari, president and chief executive of the Sabah Economic Development and Investment Authority (SEDIA).

“The vision of the Sabah Development Corridor is for the state to become a leading economic region in Asia, a preferred gateway for trade, investment and leisure for talents and businesses, focusing on agriculture, tourism, manufacturing, logistics, oil and gas, higher education and palm oil. Sabah’s 18-year development plan seeks to transform the state into a vibrant economy and one of Asia’s most liveable places by 2025,” he adds.

SEDIA was established as a one-stop authority to drive the Sabah Development Corridor, as Mr Johari explains. Its mission is to establish seamless working relations between state and federal agencies in Sabah, between the public and private sectors, as well as engaging key stakeholders, such as non-governmental organisations and the public.

“The main challenges for the Sabah Development Corridor have been improving the quality of the state’s infrastructure and human capital,” said Mr Johari. Major initiatives have included an upgrading of the airport at Kota Kinabalu, Sabah’s capital.

This is helping to attract more tourists, especially from Asian countries such as China, Indonesia, Japan, Korea, Singapore and Taiwan, who can fly directly into the international airport. Also in the transportation area, the Sapangar Container Port is undergoing a major expansion, a bus rapid transit system is being developed in the capital, and a pan-Borneo Highway will facilitate both trade and tourism.

Other infrastructure projects under way include the Sabah International Conference Centre, Mah Sing’s Kota Kinabalu Convention City, and the International Technology and Commercial Centre. An undersea cable between Sabah and peninsular Malaysia will improve the information and communications technology infrastructure, and efforts are also being made to improve local skills through the Sabah Skills and Technology Centre.

The Sabah Development Corridor has seen a surge in private investment from both domestic and foreign sources, in response to attractive incentives, as well as improvements in infrastructure. Total committed investment from 2008 to June 2016 was $35bn, with investments in a diverse array of sectors such as tourism, oil, gas and energy, palm oil, agriculture, education, manufacturing and logistics.

However, as Mr Johari notes, less than half of these commitments have been transformed into realised investments, so SEDIA is working hard to improve the realisation rate.

The potential of the development corridor is beginning to be seen, as the state recorded 6.1% economic growth in 2015, making it Malaysia’s fastest growing state, according to the country’s department of statistics. International tourist arrivals also increased by 14.2% in the first nine months of 2016, compared to the same period last year.

In tabling the 2017 budget, Sabah’s chief minister, Datuk Seri Musa Haji Aman, predicted that the economy could grow 4%-4.5% in 2016, and improve 4%-5% in 2017. But, as some commentators have observed, Sabah will need to sustain a very strong economic performance over many years to catch up to Malaysia’s leading states.

This article by John West was first published by FDI Intelligence, a Financial Times magazine.

- Light at the end of the corridor for Sabah. FDI Intelligence, 27 January 2017.