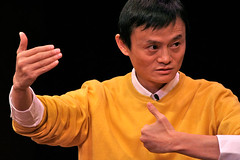 It is also relevant that countries like Malaysia and Thailand, which have been successful participants in GVCs, have never managed to break out and become industrial and technological leaders themselves. Technology is also seen as a security issue by the Chinese government. It craves to have indigenous information technology and to not be dependent on American and other Western companies.

At this stage, China’s manufacturing industry is facing four major challenges -- insufficient innovation, weakness in core technologies, excess energy consumption, and severe pollution. This is why the Chinese government launched a "Made in China 2025" initiative which seeks to upgrade China from a manufacturing giant into a manufacturing power, building on earlier such initiatives.

While delivering the 2015 Annual Government Work Report, Chinese Premier Li Keqiang said, “We will implement the 'Made in China 2025' strategy, seek innovation-driven development, apply smart technologies, strengthen foundations, pursue green development and redouble our efforts to upgrade China from a manufacturer of quantity to one of quality”. The ultimate goal is to become the world’s leading manufacturer by 2049, the hundredth anniversary of the foundation of the People’s Republic of China.

China has thus been pursuing various activities to acquire knowledge and technology to improve the sophistication of its economy, such as investing in domestic R&D, investing in foreign companies to acquire their technology, promoting “innovation mercantilism”, practising industrial espionage, and fostering entrepreneurship -- all of which can play an important role in China’s GVC participation.

China has been ramping up its spending on R&D dramatically, with R&D averaging 20% annual growth between 2003 and 2013. China accounts now for about 20% of global spending on R&D, not too far behind the US’s 27%. China will likely overtake the US in the coming years, and become the world’s leading R&D nation. Indeed, China’s new 5-year plan promises that by 2020, R&D investment will account for 2.5% of gross domestic product, compared with 2.05% in 2014 (US spending on R&D represents 2.7% of GDP).

Many questions are raised about the quality of China's R&D spending which tends to favour large companies and high-profile prestige projects, rather than dynamic small companies and projects that would have more of an impact on the lives of Chinese citizens. But China is unquestionably on the road to becoming a science and technology powerhouse. China and India now together produce almost half of the world's new undergraduate science and engineering (S&E) degrees, the EU 12%, and the US 9%. The US, however, still produces more S&E doctoral degrees than China and India and remains the leader in S&E higher education, as well as the destination of choice for international students.

China has long practised "innovation mercantilism", a strategy that embraces a new kind of protectionist trade policy, to improve domestic innovation capacity and technology -- even though it regularly contravenes its commitments under its membership of the WTO. This involves many things like subsidies and access to finance to keep production artificially cheap. This underpins its massive excess capacity across a wide range of industries. Although it is less of a problem today, for a long time China manipulated its exchange rate to enhance the competitiveness of its export and import-competing sectors.

China also uses the power of its market size to force multinational enterprises to transfer technology to Chinese companies, to push them to go into joint ventures with Chinese companies, and to coerce require them into establishing research centres into China. For example, in order to open motor vehicle factories in China, Ford had to enter into a joint venture with Chinese automobile producer Chang’an Motors. It was also required to open an R&D laboratory employing at least 150 Chinese engineers. Forced technology transfer was also how China became a leader in the high-speed train sector.

It has many restrictions on market access, such as for its semiconductor market. The “Made in China 2025” initiative is targeting “40 per cent self-sufficiency in semiconductors by 2020, rising to 70 per cent by 2025”. This would reduce Chinese imports of US semiconductors by half in 10 years and ultimately eliminate them entirely within 20.

Over recent years, China has become a major outward investor, with flows averaging $120 billion a year over the past three years. A number of years ago, it was mainly investing in energy, natural resources, and agricultural properties in Australia, Africa and Latin America. But now China’s investment is now increasingly targeting Western companies with technology, know-how and brands to enable it to climb further up the GVC.

Both the US and Europe have been receiving important inflows of Chinese investment. Some of the most important recent investments in the US have been Haier’s acquisition of GE’s appliances unit, Wanda’s purchase of Legendary Entertainment, the acquisition of Omnivision Technologies by a Chinese consortium, and, in the automotive sector, Ningbo Joyson’s acquisition of Key Safety Systems.

China has also reportedly been hiring German and Japanese industrial experts. And companies like Huawei, ZTE, Lenovo and Xiaomi have been buying patents through licensing deals, and acquisitions.

But China’s accelerating purchases of Western companies is giving rise to many concerns, and may not be a sustainable strategy, even though the accumulated stock of Chinese investment remains modest for the moment. Some Western governments are concerned about many things -- like the potential loss of core technologies and the impact that may have on the local economy; the lack of transparency of some Chinese investors; and the perceived political risks of accepting investments from state-owned companies with close links to the Chinese Communist Party. They also note China’s own market remains relatively closed to foreign investors, and no foreign company would be allowed to buy critical infrastructure or core technologies in China.

China did not invent industrial espionage, but it has certainly mastered the art. And intellectual property theft, especially from the US has been reportedly rampant, and has been called the “great brain robbery”. Back in 2012, Keith Alexander, former director of the US National Security Agency, said the loss of industrial information and intellectual property through cyber espionage constitutes the "greatest transfer of wealth in history".

Alexander said that US companies lose about $250 billion per year through intellectual property theft, with another $114 billion lost due to cybercrime, a number that rises to $338 billion when the costs of downtime due to crime are taken into account. And Microsoft estimates that 95% of the copies of Microsoft’s Office software in China are pirated, and at least 80% of China’s government computers use versions of the Microsoft Windows operating systems that were illegally copied or otherwise not purchased.

In 2015, US President Obama and Chinese President Xi agreed that the US and Chinese governments would not conduct cyberattacks to steal intellectual property for economic gain from each other. Reports suggest that there may have been a subsequent fall in such espionage, although there is always a risk that implementation of this agreement could fall foul of future tensions in US/China relations. But even if there were a sudden stop to industrial espionage, China would already have stolen a big march in its development through its acquisition of technologies in the areas of IT, renewable and nuclear energy, biotechnology, telecommunications, agriculture and so on.

Chinese Premier, Li Keqiang is also promoting "mass entrepreneurship" (along with innovation) as a new engine of China's economic development. This is a very good initiative. Since the Chinese government started removing the shackles of central planning and state ownership, entrepreneurship has been a key driver of the Chinese economy. Chinese entrepreneurs range from families that open up a small restaurant, shop or factory to people like Jack Ma of Alibaba, Ma Huateng (Pony Ma) of Tencent, or Lei Jun of Xiaomi.

Jack Ma is the symbol of the swashbuckling Chinese entrepreneur. He admits with almost great pride that Harvard University rejected his application ten times, and that his job application at Kentucky Fried Chicken was also rejected. And yet as the founder of e-commerce behemoth Alibaba, he is now the world's eighth richest man in tech with a net worth of $29 billion.

Under the leadership of Premier Li Keqiang, the Chinese government is making radical changes to improve the climate for young entrepreneurs, and according to all the signs, entrepreneurship is booming in China, especially in the IT space. But needless to say, Rome wasn't built in a day.

China’s efforts to get better value out of Asia’s GVCs are very impressive, and will no doubt help climb further up the GVC. But China’s approach is basically a top-down, centrally-controlled brand of “techno-nationalism”. Japan and Korea have also implemented similar policies in earlier years. This enabled them to climb fair way up the GVC, but their progress became stunted.

The real lesson of the world’s innovation leaders like Switzerland, Sweden, the UK and the US is that other ingredients are necessary. Open economies are necessary to boost competition as well as cooperation between companies and countries. Open societies are required to allow academic freedom, freedom of speech and thought, and a dynamic competition of ideas. And open politics and the rule of law are necessary to keep governments clean and honest, and so that bad ones can be thrown out of office. China and much of Asia are a very long way short of these ideals, and will never maximise the value of their participation in GVCs until they embrace and practice them.
Tags: china, global value chains, china's industrial upgrading, china's industrial espionnage