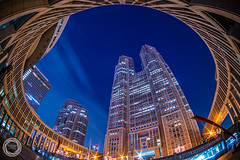 Asia's former miracle economies are now suffering from stunted development, writes John West.
"Yes, China is slowing down, but compared to the West, its GDP growth is enviable," once said Jon Copestake of the Economist Intelligence Unit. This is a familiar refrain in media reports, international conferences, and business discussions.

But all economies which are behind world leaders, like the US and Germany, have great potential for catch up growth. And the further you are behind, the faster you can grow, just by absorbing knowledge and technology from world leaders. This is the “benefit of backwardness”.

It is thus not surprising that China should still be growing so quickly. Its GDP per capita is still only one-quarter of that of the US. It would be more much surprising if China were still not growing so quickly. The real disappointment is that so many other countries cannot get their act together to achieve fast, catch up growth.

The main question facing China is whether it can stay the course in catching up to world leaders, because other Asian economies like Japan, Korea and Taiwan have not managed to do so.

Indeed, the post-war waves of high growth Asian economies, beginning with Japan, have been arrested. Asia’s major economies now face the prospect of permanently stunted development. There is very little prospect of catch up to the world’s leading economies in terms of GDP per capita, and economic and technological sophistication.

Japan’s very rapid recovery from the ashes of World War 2 took the world by surprise. Many economists were then pessimistic about the prospects for Asia, which suffered greatly from the war. The continent had few natural resources and an enormous population compared with Africa and South America. But as Japan’s growth continued, many then believed that Japan would overtake the US, in much the same way that the US overtook the UK in the 19th century.

Japan’s economic dynamism inspired the four Asian Newly Industrialising Economies -- Hong Kong, Korea, Singapore, and Taiwan -- on a similar path of rapid development. This gave rise to talk of an “Asian miracle” by the World Bank and others, and the group was labelled the Asian tigers.

Much ink has been spilt in analysing the rise of these Asian economies. The main factors were their export-orientation, good education, macroeconomic stability, and strong government leadership. But as Ian Buchanan has argued, geopolitics played an important role in the context of the Cold War, as the US offered official assistance and open markets to its friends in Asia. And all of these successful economies were motivated to become strong in the face of their threatening neighbourhoods.

But the shortcomings of the Japanese model became all-too-apparent apparent following a financial crisis in the early 1990s. Japan (and Korea and Taiwan) has since failed to both open its economy and deal with demographic decline, and is now slipping ever further behind world leaders. The prospect of these economies catching up to world leaders now seems remote.

The next wave of flying geese

Singapore and Hong Kong are rare birds in Asia, in that they have caught up to the US and Germany, and in Singapore’s case well overtaken them. There some very simple reasons. Both are Asia’s only two genuine open market economies, with large immigrant populations, in contrast to Japan, Korea and Taiwan. They are also tax havens which allow Asia’s super rich to hide their (often ill-gotten) wealth from the taxman. When these city economies are compared with New York or Switzerland’s Zurich, with which have similar GDPs per capita, their success seems less surprising.

The next group of Asian economies to take off in the region’s “flying geese” pattern of development were Malaysia, Thailand and Indonesia. These countries rapid development was mainly driven by a wave of investment from Asia’s advanced countries, which offshored lower-value added activities as they climbed the development ladder. But the education and technology capacities of these countries are relatively weak, and their economic catch up to date remains modest.

China stunned the world with three decades of 10% growth rates, following its opening up, which began in 1978 (more recently, Vietnam launched a similar opening to the world economy). As early as 2007, Premier Wen Jiabao warned that the Chinese economy may have looked extremely strong, but was increasingly, “unbalanced, unstable, uncoordinated, and unsustainable” (the “four uns”). These problems only deepened following the government’s mega-stimulus package following the 2008 global financial crisis.

Today, the future of the Chinese economy is problematic, as the government seems almost paralysed by the social and political risks of undertaking reform. China may well have the world’s biggest economy. But its GDP per capita is still only 26% of that of the US, and it remains a relatively poor country, with an enormous population.

India is the other Asian giant, with an enormous population, which will overtake China’s in 2022. India began its reform in the early 1990s, and achieved respectable economic growth. But India faces immense challenges in the form of fractious federal politics, atrocious infrastructure, appalling education, endemic corruption, and multiple forms of discrimination.

What is the outlook for Asia’s catch up economies?

All things considered, many Asian economies will likely maintain respectable economic growth rates over the coming decades. But overall, Asia has been losing some of its economic mojo, as the Asian Development Bank has argued. Emerging Asia’s "potential economic growth rate" has fallen by almost 2 percentage points in less than a decade. Overall, the region can now only grow by about 6 ½%, not the 8 ½% of yesteryear. And looking into the future, the downward slide will only continue. How could this happen?

You only have to look back on the transitory nature of some of the factors driving emerging Asia's high-growth period to glean some insights. Now that many countries are already highly urbanised, there will be less new movements of people to the city. As populations age in East Asia, there will be less energetic, youthful populations to drive growth. Over time, the benefits of backwardness also fade. And the slowdown in China, the most important trading partner for virtually all other Asian economies, is dragging down the economic growth potential of everyone.

How to revive Asia’s growth potential? There are many obvious suggestions to make like: investing in human capital, technology and infrastructure; providing more opportunity to all Asians; and fully opening economies to domestic and international competition.

But digging behind the mechanical story of economic growth is a deeper story of institutions and politics. What is required for successful economic development are "inclusive economic institutions", as argued by Daron Acemoglu and James A. Robinson. Such institutions "allow and encourage participation by the great mass of people in economic activities that make best use of their talents and skills and that enable individuals to make the choices they wish”. They “require secure property rights and economic opportunities not just for the elite, but for a broad cross-section of society". And behind inclusive economic institutions are inclusive political institutions.

The enemy of economic development is "extractive political institutions" which "concentrate power in the hands of a narrow elite and place few constraints on the exercise of this power". This elite then usually structures economic institutions in order to extract resources from the rest of society.

The analysis of Acemoglu and Robinson provides many insights into Asia’s changing political economy. In the early postwar period, Asia’s success stories (Japan, Hong Kong, Korea, Singapore and Taiwan) all had a great incentive to build strong economies through inclusive economic institutions. They faced threatening neighborhoods surrounded by communist regimes in China, North Korea and the USSR, and instability in Southeast Asia. They were also dependent on imports to supply their energy and other natural resources -- this meant that export-oriented growth was necessary to finance imports.

In more recent decades, there has been a waning of these geopolitical threat factors. And many of the winners of economic development -- big business, state-owned enterprises and banks -- have been able to exert a strong influence over Asia’s politics to keep the cards stacked in their favour.

The classic example is that of Japan where corporate and government elites have kept the economy closed from international competition, which has been a key factor behind Japan’s weak productivity and failure to catch up to the US. Regrettably, some 70 years after Japan began its post-war recovery, democracy and inclusive politics still have very shallow roots in Asia. New players have great difficulty breaking through.

Similarly, Korea’s enormous conglomerates (“chaebol”) like Samsung and LG have a stranglehold over the nation’s economy and politics, which are now holding the country back. In China, Communist Party elites fear the creative destruction that would result from deep reform of China's grossly inefficient state-owned enterprise and banking sectors. At this stage, there is little sign of reforms to ensure that market will play a "decisive" role in allocating resources, as promised in the Third Plenum in 2013.

In short, the permanence of inclusive economic institutions cannot be taken for granted. As Acemoglu and Robinson argue, "fear of creative destruction is often at the root of the opposition to inclusive economic and political institutions". One of the most visible signs of this problem is the income gap between rich and poor, which continues to widen in Asia.

In sum, it seems most likely that Asian politics will hold the region back from realizing its full economic and human potential and achieving real success in the Asian Century.
Tags: asia