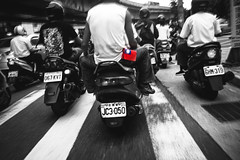 The recently-elected president of Taiwan is talking up her New Southbound Policy – but not everyone is convinced, writes John West
Taiwan’s new government is encouraging its investors to diversify their FDI away from China and towards the south-east Asian countries of ASEAN.

Among the most noteworthy Taiwanese investors are contract manufacturers Foxconn and Pegatron, which assemble the iPhone and other products for Apple as well as working with other Western companies based in China.

Overall, Taiwan’s total stock of outward FDI rose from $30.4bn in 1990 to $66.7bn in 2000, before skyrocketing to $258.8bn in 2014, based on UNCTAD statistics. But Taiwan has become highly dependent on the Chinese economy, which is the destination for more than 80% of Taiwan’s outward FDI and 40% of Taiwan’s exports.

Closer economic relations between Taiwan and China were fostered by the Kuomintang regime under President Ma Ying-jeou, from 2008 to 2016, including through the Cross-Strait Economic Co-operation Framework Agreement (ECFA) in 2010 which aims to reduce commercial barriers between the two sides. At the same time, these trends have led to many calls for Taiwan to diversify its economic relationships.

In her inaugural address of May 20, 2016, Taiwan’s President Tsai Ing-wen from the Democratic Progressive Party announced “a New Southbound Policy in order to elevate the scope and diversity of our external economy, and to bid farewell to our past over-reliance on a single market”, by expanding relationships with ASEAN and India.

“The timing is right for a southward push,” says Johnny Lin, deputy director of China affairs at the Democratic Progressive Party. “Taiwan can leverage its improving people-to-people connections with several ASEAN countries thanks to growing marriage migration, as well as contacts through foreign contract workers.”

Dr Tsai-Lung adds that “China’s economic slowdown, excess capacity in several industries, rising wages, and more stringent environmental regulations are motivating Taiwanese investors to look to the ASEAN region.” And Taiwan has received official delegations from Indonesia and the Philippines in response to President Tsai’s announcement of the New Southbound Policy.

However, some Taiwanese businessmen question the policy’s viability. “The common language and close cultural connections between Taiwan and China mean that Taiwanese businessmen will always be more attracted to the Chinese market,” says Winner Yu, board director of the Taiwan Electrical and Electronic Manufacturers’ Association. “While some labour-intensive activities are being shifted out of China to ASEAN countries, many new higher value-added activities are still being located in China, such as the decision of Taiwan Semiconductor Manufacturing Company, the world’s largest contract chip-maker, to locate a new $3bn production site in Nanjing.”

Many economic commentators also note that Taiwanese business is at a distinct disadvantage in the ASEAN region compared with countries like Japan, Korea and China, as politics across the Taiwan Strait have prevented Taiwan from negotiating free trade agreements with ASEAN.

This article was first published by FDI-Intelligence, a magazine owned by the Financial Times.