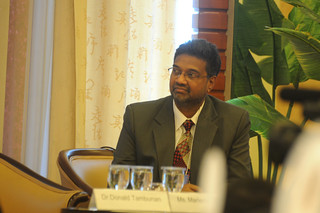 Debt and Bets on whose interest?

Jayasri Priyalal from the UNI Asia & Pacific trade union group has shared with us his important article on major problems in the banking industry.
Finally the UK’s Serious Fraud Office managed to get those who rigged the London Inter Bank Offered Rate, (LIBOR) the global bench mark rate of interest convicted for the crime committed. However the impact of the LIBOR rate manipulations have caused serious repercussions on all global interest rates, exchange rates of different currencies used to finance international trade. One can argue that all balance of payment calculations and the resultant global growth figures are all inaccurate as a result of LIBOR rate manipulations.

One might doubt sensibilities of giving advice to policy makers, who do not heed to the warnings of professionals; on unsustainability of their policy directives. Nevertheless, this article is to explain as to how the global debt level has reached a deplorable level; hampering future growth towards shared prosperity for all. Secondly also aims to critically evaluate the various policy options introduced to achieve unrealistic short term growth models; based on fictitious, manipulated financial inputs to measure performances in the respective economies.

There are no remedies for those decisions made purely for short term interest compromising ethics and values patronizing few speculators to earn a handsome return. As reported by McKinsey Global Institute; (FEB 2015) global debt level continues to grow, since 2007 the global debt increase is around US$ 57 Trillion. Common trends in debt fuelled economies are; initially private debt turns to public debt and gets camouflaged as sovereign debt with the accumulation of toxic assets in banks.

Thereafter the quantitative easing rescues are offered from Central Banks with cheap money in abundance, which is seen as a government subsidy extended to those rich in liquidity, to channel them towards speculations to drive the markets up. Thus creating panic amongst monetary authorities as the trend leads to create asset bubbles. Yet the most vibrant SME segments that create jobs and propel economic growth in the respective economies are forced to borrow at very high rates from non-banking channels as they are not being served by the formal banking system. The low interest regimes are blessings in disguise for speculators. Millionaires have mushroomed at a growth rate of 85% in USA since 2009.

Unfortunately the international financial institutions who are responsible to monitor these activities have not prescribed any remedies to regularize the inaccuracies. It appears that they too are bankrupt with new ideas to look for innovative solutions to impending problems. The proposed regulatory tightening is unlikely to restrain the criminal behaviour of profit engineering triple “B” rated bankers (Big Bonus Bankers).

As “Regulatory Physician” himself has been the disease, neither he could control the epidemic or cure the patient, Physician breadth his last; leaving the patient in bewilderment. In the same line one can predict the effectiveness of monetary policy tools currently used will soon be redundant. Near Zero or Zero interest rate policy options of the monetary authorities will certainly challenge the survival of the banking business model in days ahead. As often seen markets are good, provided you are in the right side of the market.

Global banking and financial system is under a severe attack by two notorious man made viruses GREED and CORRUPTION. In order to arrest these unhealthy situations urgent remedial measures are needed, they should come in the form of virus guards and fire walls, restricting the contagious effects of the disease currently impacting heavily in the banking and finance industry. Spill over effects are also visible in other industries including sports.

There should be concerted effort by all stake holders to change the culture of short termism in banking industry, if not very soon banking business model will be “UBERIZED”. Internet of Things (IOT) is certainly going to shape the financial services landscape in time to come. Fintech companies are coming up with innovative APPS and MAPS to cater to the potential customers currently out of scope of the banking landscape.

This culture compounded with huge debt levels stalls economic growth globally, getting the banking industry working for economy through strengthening producers and the consumers is a way out of the current crisis.World Economic Forum identifies Income inequality as the number one risk factor for businesses at present. In this context business as usual in the financial markets without learning lessons from irregularities, wrong policies are dangerous. For the banking industry; successes in the past will be no panacea; as success of future will not be a repetition of the past.

It is predicted that if the global GDP growth drops to 2% level it will take another 36 YEARS to double the growth rate from current levels. An OECD research study has predicted a steady declining returns of the debt fuelled current investment capital by 2035. Challenging times are ahead to work towards finding right solutions for common and conflicting issues in the finance industry.

Jayasri Priyalal is Director of the Finance Sector, Professionals & Managers Group Activities, at UNI Asia & Pacific, based in Singapore. UNI Global Union, based in Nyon, Switzerland, represents more than 20 million workers from over 900 trade unions in the fastest growing sectors in the world – skills and services.

This article was first published on the UNI Global Union website on 3 August 2016.