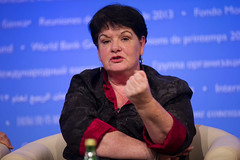 Global recession risk requires coordinated G20 action on wages and jobs say trade union leaders.
Trade union leaders at the Labour 20 summit have called on G20 Labour and Employment Ministers meeting in Beijing to put the urgency for jobs and growth back on the agenda, with a focus on women and young people, as well as supporting social dialogue and collective bargaining.

One in ten of people their families are falling through the cracks, without enough money to cover their basic needs: housing, food and electricity.

“Mid-year forecasts showed that global GDP growth has stalled. There is now a real risk of a Brexit-led recession compounding the situation.

Workers in the G20 and beyond cannot afford a recession and a renewed rise in unemployment. For young people, in many G20 countries the risk of a “lost generation” is real.

Governments now have to undertake the coordinated action to raise public investment and wages that even the international institutions are beginning to realise is necessary,” said John Evans, General Secretary, Trade Union Advisory Committee to the OECD (TUAC).

-- the goal to reduce the gap in participation rates between men and women in G20 countries by 25 per cent by 2025,

-- the commitment to reduce the share of young people most at risk of being permanently left behind in the labour market by 15 per cent by 2025.

The 2016 L20 Tracking Survey found that 88% of L20 members think that policy commitments need to be deepened by the G20 to achieve the 2.1% growth target. 43% of L20 members call on Ministers to revise existing employment policies completely and another 43% would add several new policies.

“We must have minimum wages on which workers can live with dignity, we must rebuild collective bargaining to ensure both skilled wages and distribution of productivity and we must end tax evasion so we can boost universal social protection with the foundation of the social protection floor. This is both a tool of social cohesion and family security but also a vital economic stabiliser. When baby formula for one baby can take a day's wages in some countries, families are in trouble,” said Sharan Burrow, General Secretary, International Trade Union Confederation (ITUC).

L20 recommendations to the G20 Labour and Employment ministers meeting in Beijing include:

-- Raise investment in jobs and wages through an increase in public investment in sustainable, climate-sound infrastructure and use of collective bargaining and minimum living wages as a tool to address rising inequalities and the falling labour income share;

-- Develop economic strategies for investment in the ‘’care economy’ to meet the G20s “25 by 25 target. An ITUC shows that investment into the care economy of 2% of GDP in just 7 countries would create over 21 million jobs;

-- Implementation measures for the G20 target to get young people into work, education or training;

-- Develop an action plan for decent work in the digital economy including protection of workers’ rights for those employed on internet platforms and strategies for a fair transition for jobs subject to technological change;

-- Take co-ordinated action to support integration of migrants and refugees in receiving countries including their right to work;

“We desperately need infrastructure to drive jobs and enable a greener economy but there is no point in building more malls when they are merely air conditioned meeting places because working people have no capacity to purchase products. And we desperately need investment in the care economy to formalize jobs with high social value, and to create new ones, for women and men”, said Sharan Burrow.

The L20 Summit in Beijing brings together trade union leaders from G20 countries for a two day summit to co-ordinate trade union activities with the G20 to improve wages and employment conditions for working people.