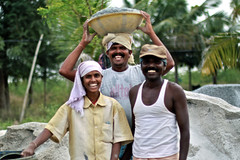 India's National Agriculture Market is an initiative helping to transform agricultural marketing in India, write Mukul Asher and Stuti Ji.
The Prime Minister Narendra Modi – led government has announced the ambitious goal of doubling income of farmers by 2022. Progressing towards such a goal requires integrated economic, institutional, and governance reform initiatives not just in agriculture sector, but also in power, roads, and other infrastructure, particularly in rural areas.

It is also essential to keep overall economic growth which is broad-based at a fairly high level. According to World Bank’s Global Economic Prospects, India’s real GDP growth for 2015 and 2016 is estimated at 7.6%, in contrast, for advanced countries, the growth rates are 1.8 and 1.7 percent respectively. India needs to sustain this level of growth inspite of difficult global economic environment.

India is among the major global producers of agricultural commodities, and of fruits and vegetables. It is third in production of cereal, second in rice and wheat, the top producer of pulses and the second highest producer of fruits and vegetables. It also has varied climatic conditions which could facilitate diversification in both agriculture and horticulture crops. However, India’s cultivable land to population ratio has been declining due to competing demands on land from other uses and accelerated, in some cases, by declining profitability of traditional agricultural crops. This has been accentuated by land fragmentation, particularly in states such as West Bengal. Consequently, while the share of agriculture in GDP has declined to 14.6 %, more than half the population (54.6%) derives main livelihood from this sector.

The agriculture sector therefore is ripe for renewed policy focus. The sector needs investments, more outcome-oriented use of technology, and marketing, and supply chain reforms. In addition to the National Agriculture Market (NAM), the government has also launched the National Energy Efficient Agriculture Pumps Programme (NEAPP), and the Pradhan Mantri Krishi Sinchayee Yojana (PMKSY) to help minimize water and energy inputs per unit of output; and to improve agricultural marketing efficiency, which in turn could broaden agricultural supply chains and lead them to higher value creation.

Agricultural markets or ‘mandis’ as they are commonly known, are usually where sale and purchase of agricultural products takes place. In India these are administered through Agricultural Produce Market Committees (APMCs) through various state APMC Acts. Under this, the geographical area of the state is divided into different market areas with each falling under the jurisdiction of a market committee. The first sale of agricultural commodities such as cereals, pulses, vegetables, fruits and even products like chicken, fish can be conducted only through commission agents, who have been licensed by the APMCs. By way of the Act, different taxes and charges end up being levied on the trade conducted in Mandis.

Despite amendments to make the act less restrictive, such as allowing non-state actors to set up market areas (as opposed to it being the prerogative of state governments alone, as was the case earlier), amended provisions have been implemented to different degrees by states. Consequently APMCs wield considerable monopoly power and under various categories end up charging multiple fees of substantial magnitude. These vary widely between states, inducing distortions in the market due to a cascading effect on the final price of the commodity. Even within a state, the fragmentation of markets hinders free flow of agricultural commodities from one market area to another, resulting in higher prices for the consumer without any commensurate benefit to the farmer. Further, revenue earned by APMCs does not go to the state treasury and hence is exempt from legislative and auditing oversight.

The APMC operations exhibit non – transparency, and lack of accountability, and have created substantial local (and sometimes regional) monopoly power, which often translates into political power. The resulting distributional coalitions whose interests lie in rent-seeking rather than in the well-being of farmers, have led resistance to substantive reforms of the current inefficient agricultural marketing practices.

In order to address this, on April 14 2016, the National Agriculture Market was officially launched with the inauguration of the pilot of the electronic trading platform for agricultural produce or e-NAM. e-NAM makes use of ICT to network existing APMC Mandis into an online trading platform at the national and state level. This promotes transparent sale transactions and real time price discovery that is based on actual demand and supply. At present M/s. Nagarjuna Fertilizers and Chemicals Ltd. has been designated as the Strategic Partner (SP) responsible for development, operation and maintenance of the platform.

In addition to e-NAM, the other components of NAM include a more liberal licensing regime for traders, buyers, commission agents, that do not require physical presence or shop premises in the yard. This promotes greater competition and limits the monopoly power of existing agents. Other features of NAM include validity of a single license for a trader across markets in the state, a single point of levy of the market fees and harmonisation of agricultural produce standards. This is expected to lead to uniformity and streamlined procedures across integrated markets.

In the current set-up, due to the perishable nature of goods and the need for liquidity, farmers often sell at low prices, with most of the gains accruing to redundant middlemen and retailers. This in turn affects the level and rate of food inflation in an adverse way for the consumers. For farmers, the establishment of NAM and e-NAM would mean more options for selling their products and receiving prices commensurate with quality. Consumers too benefit from better quality produce, available at more reasonable prices. Traders and bulk buyers gain from access to a larger national market for secondary trading. Finally, for Mandis a freely accessible ICT platform reduces manpower, book-keeping and reporting requirements, while at the same time eliminating the potential for manipulation in tendering and auctioning.

Economic Rationale: The economic rationale behind the NAM thus, is to reduce asymmetries of information that farmers and traders face in marketing their produce and to lower transactions’ cost that accrue from high levels of market charges and movement controls. Moreover, by moving trade to an open access electronic platform, the monopoly power exercised within APMCs and by them is curbed. Transparency in operations is also promoted. Over the long term and with the nation-wide implementation of the NAM, it is expected that there will be a transfer of knowledge and inputs across states. Another crucial area where the NAM may be useful will be in controlling food losses. Post-harvest losses in a developing country such as India result from a combination of poor infrastructure, technical and managerial practices. In 2013, almost 7 million tonnes was discarded as vegetables waste, which constituted about 5.8% of total vegetable production. While better infrastructure and storage facilities are essential, as recommended by the High Level Committee on restructuring of the Food Corporation of India (FCI), setting up such systems will take time. Thus simultaneously, faster movement of produce through lower movement control and immediate price realisation as enabled by NAM, will help contain some of these food losses.

States seeking assistance under the NAM scheme need to undertake three reforms -the validity of a single license across the State, a single point levy of market fee, and fulfilling the provision for electronic auction as a mode for price discovery. Thus, states need to ensure that NAM-connected Mandis have requisite online connectivity, hardware and assaying equipment. Agriculture is primarily a State responsibility under the Constitution. So it is up to each state to not only fulfil these conditions, but to link them effectively with other initiatives of the Union government.

Moreover, small and marginal farmers in many states, do not take their produce to the Mandi, selling instead to local level private traders and retailors in their neighbourhood (this ratio being well above 50% for some crops). Thus a substantive challenge would be to find ways to allow the benefits of NAM to reach them.

As of April 2016, 21 Mandis from eight states (Gujarat, Telangana, Rajasthan, Madhya Pradesh, Uttar Pradesh, Haryana, Jharkhand, and Himachal Pradesh) have been linked to the NAM, with common tradable parameters being developed for 25 commodities. In-principal approval has been granted to four other states -Maharashtra, Chhattisgarh, U.T. of Chandigarh and Andhra Pradesh.

The final target is to link 585 markets to the NAM by 2018. But given that there exist over 7,000 regulated markets (principal markets and sub-markets), there is still substantial effort needed until a truly unified national agricultural market is fully realised. But a promising start has been made.

It would be useful to create a feedback loop mechanism to refine NAM as it progresses by developing an appropriate dashboard to monitor its quantitative and qualitative significance in agricultural markets, value addition and farmers’ incomes. Such measures will be consistent with making agricultural sector activities, and its inter-linkages with other sectors more professionally managed, informed by technological and other knowledge inputs. A key criterion for measuring the success of NAM would be how far NAM in conjunction with other initiatives assists in improving India’s agricultural surplus in merchandise trade, and strengthens the linkages between the agriculture, industry and services sector.

This article was first published on June 14, 2016 by MyIndMakers.