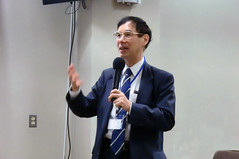 Asian Development Bank Institute Dean and CEO, Naoyuki Yoshino, tells John West that Japan's Abenomics programme should be implemented with much greater urgency, and be better explained to the public.
Professor Yoshino reviewed progress in the three "arrows" of Japan’s Abenomics, a policy programme which was launched three years ago with great expectations.

The monetary policy arrow of quantitative easing was implemented very well, in part because it was "easy to do". The initial effects were positive, with the yen depreciating substantially, and the stock market booming. But with the government still struggling to defeat deflation, official interest rates have now been moved into negative territory.

"The Bank of Japan had wanted the banks to lend more money to business to stimulate the economy, but this has not happened", said Professor Yoshino. "The banks claim that there is no demand for extra finance from big companies, and that they cannot lend to small and medium enterprises or startups because of stringent requirements on their capital holdings". Professor Yoshino added that, with negative official interest rates, Japanese banks are now increasing their holdings of foreign assets, which is "very risky".

The fiscal policy arrow of Abenomics involves progressively increasing the consumption tax to put public debt on a sustainable path. Japan's gross public debt now stands at 230% of GDP, by far the highest of all advanced countries, according to the OECD.

The consumption tax was increased from 5 to 8% in 2014, and is scheduled to increase again from 8 to 10% in 2017. "It is imperative to increase the consumption tax next year, and not postpone the increase again, despite any possible adverse short-term economic impact", stressed Professor Yoshino. “We must minimise the burden of public debt on future generations”. Professor Yoshino is concerned that the Japanese public does feel a sense of responsibility for the country’s enormous public debt.

"The implementation of the third arrow of structural reform is still very slow", said Professor Yoshino. To deal with the effect of Japan's ageing population, he recommends encouraging seniors to continue working by replacing Japan's seniority-based wage system with one based on productivity.

"As seniors' productivity gradually declines, so should their wages", said Professor Yoshino. "A productivity-based wage system would enable workers to remain economically active much longer until, say the age of 75, instead of retiring at 60. And a growing role for seniors in the workplace could be encouraged by greater use of robotics."

Professor Yoshino said that increased female participation in the workforce could be facilitated by a more rapid expansion of childcare facilities, and by promoting teleworking from home. "It is also necessary to change Japan's group work ethic", said Professor Yoshino. "Women should not be forced to stay late in the office, waiting for the boss to leave. They should be allowed to leave early to be with their families."

“The Trans-Pacific Partnership, which promises a significant opening in Japanese markets, is also a very important initiative for Abenomics”, said Professor Yoshino. “But in contrast to the manufacturing sector, Japanese agriculture needs longer time to adjust.”

"Overall, the Abenomics programme is a very good policy package", concluded Professor Yoshino. "But it needs to be implemented with much greater urgency. And the government should make much greater efforts to explain the necessary reforms to the public. This is especially the case when it comes to increasing the consumption tax, and encouraging greater participation of seniors and women in the workplace."

An abridged version of this article, written by John West, was first published by FDI-Intelligence, a Financial Times magazine.