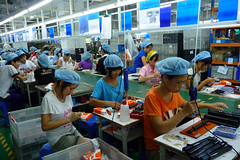 Processing Exports Remain Crucial to the Chinese Economy, writes Professor Yuqing Xing.
After eight consecutive months of negative growth, China’s exports in the March of 2016 finally reversed the course, and surprisingly rose 11.5 percent. Many China watchers interpreted this as a sign of export recovery. I think it is too early to make the call.

This festival follows a lunar calendar, which makes the holiday season start at different periods of the calendar year, affecting the calculation of monthly exports. The holiday season of the Spring Festival often results in a big swing in the production of ordinary exports.

Processing exports used to account for more than 50 percent of China’s exports before the global financial crisis. At its peak, its share reached as high as 57 percent. In the era after China’s WTO entry, the drastic expansion of processing exports powered the double-digit growth of China’s exports and eventually transformed China into the No.1 exporting nation in the world.

Processing exports is actually a subset of global value chains’ (GVCs) activities. By engaging in processing exports, Chinese firms have been successfully integrated with GVCs and gained access to the global market. Lacking in brand recognition, global distribution networks, and advanced technology, Chinese firms face tremendous difficulties in penetrating international markets, in particular the markets of high-income countries, where consumers prefer branded products and high-tech gadgets. As participants of GVCs, Chinese firms specializing in processing exports can overcome these obstacles easily by leveraging on the advanced technology, brands, and global production networks of the lead firms of the GVCs, entering international markets and enjoying the benefits of the world economy.

GVCs have actually functioned as an effective vehicle for Chinese firms to sell their low skilled labor services and low value added parts and components to consumers in international markets. Besides the intrinsic comparative advantage in abundant labor endowment, plugging into the value chains of the global manufacturing industry by specializing in processing exports, explains most of China’s export boom in the last decades.

Moreover, firms specializing in processing exports can evolve from pure assemblers to original equipment manufacturers, original design manufacturers, and eventually original brand manufacturers. In other words, processing exports offer a clear path to move into the upper ladders of GVCs. It is imperative to emphasize that technology innovation and moving into high value added segments require not only huge investment in research and development, but more importantly a pool of highly qualified engineers and scientists. The successful experiences of Japanese, Korean, and Taiwanese firms suggest that the evolution of firms from low value added to high value added segments of GVCs occurs step by step rather than in a leapfrog fashion.

Compared with mixed assembly exports, the domestic value added of pure assembly exports, which requires only low skilled labor, is much lower. After a rapid growth of more than three and half decades, China has turned into a middle-income country on average. Whether those low value added assembly jobs remain important and Chinese firms should exit from the sector, is debatable among economists and policy makers.

The education structure of the Chinese labor force nonetheless suggests that low value added assembly jobs remain crucial for the Chinese economy. Among 1.0 billion worker forces, 40 percent have attained only middle school education, far from enough to undertake high-value added tasks, not even mentioning to take part in technology innovations. The low educated workers need jobs matching their skills so as to make a living. Processing exports provide employment to this group of workers, who belong to the low-income group of Chinese society and are vulnerable to economic shocks.

The high value added service sector employs only highly educated workers, which consists of a very small portion of the labor force. Taking India as an example, it is famous for its information service industry, which exported USD 86 billion in 2014, the largest among developing countries. The information service industry of India, however, accounts for less than 1 percent of the Indian workforce.

For a low skilled worker, switching from a low value added manufacturing job, such as assembling export products, to a low value added service job, such as delivering meals, packages of online shopping, or driving a taxi, may not necessarily lead to income enhancement. In terms of productivity growth, the source of wage increase, manufacturing employment generally has more potential than service employment.

The downward trend of the US median household income since 2000 is closely related with the shrinking manufacturing job sector, one of major challenges faced by the US in the age of globalization. Given the importance of processing exports in supporting employment, in particular the massive number of low skilled workers, it is too early for China to give up on processing exports.

In the last 10 years, minimum wages rose 10 percent annually on average across the country. Officially raising minimum wages can help enhance the income of the low-income group and alleviate the income disparity. On the other hand, if wage growth exceeds workers’ productivity growth, firms’ profits and competitiveness will be undermined. Additionally, employers’ contributions to all benefits of employees, such as pension, healthcare, and unemployment insurance, are based on wages. The actual cost increase of manufacturing processing exports would be much higher than what the wage increase indicates.

Chinese firms engaging in processing exports generally have no pricing power and cannot pass on the increased labor cost to foreign buyers. They have to accept processing fees set by lead firms of value chains, and absorb the increased labor cost either by improving productivity or lowering profits. If they fail to cope with the rising labor cost, they will exit processing exports or relocate to third countries, which undercut the export capacity and employment of the Chinese economy.

Moreover, since July 2015, the RMB appreciated cumulatively against the USD by more than 35 percent. Processing fees or the prices of China’s processing exports are all invoiced in the USD. There is no automatic transmission mechanism to pass on the RMB appreciation to foreign contractors or buyers. Chinese firms have to shoulder all the cost associated with the RMB appreciation.

To revive processing exports, a flexible exchange rate regime is necessary. The pace of raising the minimum wage should slow down, and at least not exceed the growth of labor productivity.

Yuqing Xing is a Professor of Economics and the Director of Asian Economic Policy at the National Graduate Institute for Policy Studies, Japan.

This article was first published by the IPP Review on 11 May, 2016.