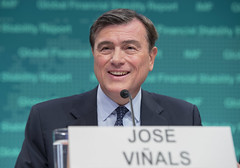 Risks of global financial instability on the rise

Europe's banks present an important challenge for global financial stability. Mr Viñals stressed that Europe must urgently tackle its elevated non-performing loans – eurozone banks still held €900bn of non-performing loans at the end of June 2015. It must also address over time the problem of having too many banks, complete its banking union and establish a common deposit guarantee scheme.

Another factor behind the rising economic and financial risks has been the sharp fall in commodity prices. This has exacerbated both corporate and sovereign vulnerabilities in emerging markets. “After years of growing indebtedness, emerging economies face a difficult combination of slower growth, tighter credit conditions and volatile capital flows,” said Mr Viñals. Some countries are now running out of room to manoeuvre, as the health of the corporate sector deteriorates. And this can spillover to governments, as many weaker corporates are state owned.

The decline in “corporate health” in China, due to slowing growth and lower profitability, is another major reason for rising risks for global financial stability. In China, there is a “rising share of debt held by firms that do not earn enough to cover their interest payments”, said Mr Viñals. “This measure, which we label 'debt at risk', has increased to 14% of the debt of listed Chinese companies, more than tripling since 2010.”

China’s declining corporate health also has an impact on Chinese banks. “This report estimates that corporate bank loans potentially at risk in China amount to almost $1300bn. These loans could translate into potential bank losses of approximately 7% of GDP,” said Mr Viñals.

According to Mr Viñals, this number is “manageable”. But the magnitude of China’s financial vulnerabilities calls for an ambitious policy agenda, including addressing the corporate debt overhang, strengthening banks, and upgrading the supervisory framework to support an increasingly complex financial system.

In conclusion, Mr Viñals believes “more needs to be done to secure global stability… If not, market turmoil may recur and intensify, and could create a pernicious feedback loop of fragile confidence, weaker growth, tighter financial conditions and rising debt burdens. This could tip the global economy into economic and financial stagnation.”

This article, written by John West, was first published by FDI-Intelligence, a Financial Times magazine on 28 April 2016.