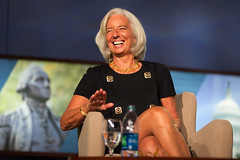 The IMF has marked down its economic growth forecasts for 2016, and warns that financial and 'non-economic' risks could weaken the global economy further, writes John West.
"Growth has been too slow for too long," Maurice Obstfeld, the IMF's chief economist, told a press conference as he launched the fundss World Economic Outlookat its 2016 Spring Meetings.

The IMF is confident that additional stimulus measures that the Chinese leadership is putting into effect can bring the country's growth to 6.5% this year. At the same time, the IMF is worried about the quality of Chinese economic growth more than it is the quantity. It is concerned that some of the stimulus is likely to take the form of higher credit growth, and more support for declining, unproductive sectors.

The downgrading of the IMF's forecasts reflects a broad-based slowdown across different country groups, and also points to a vulnerability of the world economy to financial and 'non-economic' risks. Since mid-2015, there have been two rounds of financial market turbulence. Meanwhile, the violent instability in countries such as Syria, which is driving refugees to Europe, "has challenged the EU’s ability to preserve open internal borders", said Mr Obstfeld., adding that this has contributed to "a rising tide of inward-looking nationalism".

"One manifestation of increased nationalism is the very real possibility that the UK will exit the EU, damaging a wide range of trade and financial relationships," said Mr Obstfeld. "At the same time, across Europe, the political consensus that once propelled European unification is fraying."

Other advanced economies such as the US are not exempt from similar trends, as "a backlash against crossborder economic integration threatens to halt or even reverse the post-war trend of trade liberalisation," said Mr Obstfeld. And several large emerging market economies face political tensions or geopolitical risks.

In short, the IMF's forecast for weak economic growth could easily be undermined by many risk factors, according to Mr Obstfeld. And "lower growth means less room for error" because of the risk of being dragged into "a low-growth equilibrium".

Moreover, he added, “lower growth reinforces this turn toward inward-looking nationalistic attitudes”, since “in many countries, the lack of wage growth and greater inequality have created widespread census that economic growth has mainly been to the benefit of economic elites... that they have gained disproportionately, leaving too many others behind”.

On what action to take, Mr Obstfeld said: “With its downside possibilities, the current diminished outlook calls for an immediate and proactive response.”

The IMF has thus called for a “three-pronged policy approach”. In particular, monetary policy needs support from the other two policy prongs, from fiscal policy and from structural policy. Fiscal policy could focus on infrastructure investment, R&D, and tax reforms. And a range of well-sequenced structural reforms can boost potential output, especially if accompanied by complementary fiscal support.

“If national policymakers were to clearly recognise the risks they jointly face and act together to prepare for them, the positive effects on global confidence could be substantial,” said Mr Obstfeld.

This article, written by John West, was first published by FDI Intelligence, a Financial Times magazine on 28 April 2016.