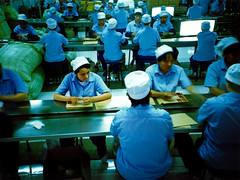 China needs a genuine open market economy to reignite its productivity genie, argues John West.
The only way that China can continue to climb the development ladder and global value chain, and become an advanced economy is by reigniting its productivity genie. And to do this, it must create a genuine open market economy. But don’t hold your breath!

The Chinese economy has reached a major turning point, as reflected in its current slowdown. The economy is probably growing in the 2-4% range, not the “6.9%” recorded in the country's dodgy statistics. This is way down from the 10% growth averaged in the three decades to 2010. China’s economic predicament has also become more complex, with the dynamic coastal areas still growing strongly, while many other areas are now well in recession.

Much public debate is focussing on the argument that China needs to shift from an investment- and export-driven development model to one based on private consumption and services. But this line of argument clouds the reality of what China really needs to do.

Since 2007, China's productivity growth has been on a sharp downward trend, and has been hovering around zero in the past couple of years, after having been a key driver of economic growth during much of the reform period. This is all the more worrying now that China's labor force has also been falling these past few years, the result of the sharp decline in the country's fertility rate. With less and less workers, China must lift its productivity.

One obvious symptom of China's productivity problem is the massive overcapacity across a wide range of industries like steel, aluminium, cement, chemicals, refining, flat glass, shipbuilding, and paper and paperboard, as the European Chamber of Commerce in China has documented. For example, China’s steel production “has become completely untethered from real market demand, and is now more than double the combined production of the four next leading producers: Japan, India, the US and Russia”.

Overcapacity is not a new problem in China, where the state still casts a heavy shadow over the economy. But overcapacity reached astronomical proportions as a result of China’s mega stimulus package in response to the shock from the 2008 global financial crisis. This stimulus resulted in a large unproductive investment through the expansion in the production capacities of many SOEs.

It also created a massive oversupply of housing, notably in second- and third-tier cities, along with highly indebted corporate and local government sectors. China’s total debt is now estimated at 260% of GDP, double that in 2008, and much higher than that of the US. Many of China’s SOEs are zombie companies which are de facto bankrupt.

As the European Chamber of Commerce has argued the overcapacity problem has highlighted the inefficiencies of the Chinese market and governance. "China is not yet an open and domestic market, but rather a patchwork of regional markets, each with its own unique trade and investment barriers. In administering this continent-sized country, the central government therefore often possesses a less than absolute capacity to implement its macroeconomic policy objectives or to maintain some measure of coordination across subnational regions”.

Local protectionism is widespread. Local governments promote favoured firms. SOEs have access to subsidized credit, energy and other inputs. They are often tasked with political objectives like maintaining employment. Corporate bankruptcies are avoided by banks rolling over company loans and using local subsidies. Many companies have a philosophy of market share rather than profitability. Non-performing loans are hidden by banks. SOEs pay minimal dividends to the government. And environmental, health and safety standards and laws are not fully implemented.

These practices result in an inefficient allocation of resources, as well as environmental degradation. They also lead to trade disputes with China’s trading partners.

All other indicators point to China's lack of an open market economy, despite the success of private companies like Alibaba, Huawei, Tencent and Xiaomi. The Chinese government has some of the heaviest state controls over the economy, barriers to entrepreneurship, and barriers to trade and investment of all the countries examined in the OECD's Product Market Regulation study.

The World Economic Forum’s Global Competitiveness Index highlights the structural weaknesses of China’s financial sector. This is dominated by large state-owned banks, which lend much more to SOEs or large corporations with connections than to SMEs. Not surprisingly, they have accumulated many non-performing loans.

China’s lack of capacity to innovate has also become a growing concern in recent years. Evolving from a manufacturing-based economy to an innovation powerhouse requires a holistic approach to the innovation ecosystem, including nurturing talent and technological readiness. It is a lot more than spending money on R&D, as China has been doing. It also requires an open society with freedom of speech and academic freedom, which is less and less the case in China today.

This may seem surprising given all the hype that accompanied China’s membership of the World Trade Organization (WTO) in December 2001. But as a number of analysts, like the Information Technology and Innovation Foundation, have argued, there is a yawning gap between China’s WTO commitments and practices.

“China’s economic and trade policies increasingly contravene fundamental principles of global trade, including national treatment, non-discrimination, and rules-governed, market-based trade in accordance with the theory of comparative advantage. And, if anything, China’s aggressive embrace of innovation mercantilism -- policies such as forced technology transfer, export and production subsidies, or currency manipulation that seek to advantage domestic enterprises at the expense of foreign competitors -- have only grown stronger in recent years.”

As Nobel-prize winning economist Paul Krugman has said, "Productivity isn't everything, but in the long run it is almost everything". And the most effective driver of productivity growth is an open market economy.

But the Chinese government lacks the courage to undertake the necessary bold reforms to reignite the productivity genie. Some two years ago President Xi Jinping announced a reform program that would give market forces a “decisive role” in allocating resources. But little real reform has actually occurred, apart from stuttering reforms to financial markets.

Hesitancy to undertake necessary reforms was also evident from the recent National People’s Congress (NPC) which approved China’s 13th five-year plan (2016-2020). The government is clearly concerned to maintain economic growth at all costs, no matter how efficient it might be.

As it is planning for growth in the 6.5-7.0% range in 2016 to maintain “relatively full employment”, it is clearly more concerned about social stability than productivity. With fiscal and monetary policies geared to the achieve these goals, there is clearly the risk of even more bad lending. And there is a risk that China’s economic statistics will become even more unreliable.

Looking ahead, the government is targeting an average growth rate of 6.5% between now and 2020. It is clearly attached to its goal of “building a moderately prosperous social in all respects and double the 2010 GDP and per capita personal income by 2020”. It seems clear that it will soft-pedal its commitments “supply-side structural reform” and tackling problems like zombie companies and excess capacity in order to have no adverse impact on economic growth or employment. Premier Li has said that government must avoid mass layoffs. The government is already eyeing the 2021 celebrations of the centenary of the founding of the Communist Party.

In reality, China needs a period of slower growth in the short term, during which the mess of excess capacity and debt are brought under control, and during which open-market reforms are implemented to launch a new phase of productivity-driven growth. Keeping the economy floating high through more economic stimulus merely postpones structural adjustment, requiring a bigger adjustment down the road.

It is not surprising that the Moody’s the credit ratings agency has lowered its outlook for China from stable to negative, citing “uncertainty about the authorities’ capacity to implement reforms”. "Without credible and efficient reforms, China's GDP growth would slow more markedly as a high debt burden dampens business investment and demographics turn increasingly unfavourable," Moody's said in a note.

What is holding China back?

Clearly the government is concerned about social stability due to job losses that might result from reform in light of growing labor and other social unrest. It is also struggling with local government and SOE vested interests, especially since many SOE managers are also members of the Communist Party’s Central Committee.

It also seems that the Chinese Communist Party is still in the midst of a power struggle that continues from the appointment of Xi Jinping as President, and has probably been exacerbated by his anti-corruption campaign that may have created more enemies than friends. More fundamentally, despite preaching the benefits of market forces, the Chinese government is instinctively reluctant to let go.

Ultimately, seriously tackling China’s productivity challenge is a test of Xi Jinping’s leadership. Xi must show courage, like Premier Zhu Rongji did over fifteen years ago, when he launched the first wave of China’s SOE reform. Xi’s ambition of staying in power beyond his theoretical 10-year term limit will not be realised with a stagnant economy -- nor will the Communist Party’s ambition to remain in power forever.

- European Chamber of Commerce in China. Overcapacity in China: an impediment to the Party's Reform Agenda. 2016.

- REPORT ON THE WORK OF THE GOVERNMENT. Delivered at the Fourth Session of the 12th National People’s Congress of the People’s Republic of China on March 5, 2016. Li Keqiang, Premier of the State Council.
Tags: china, productivity, xi jinping