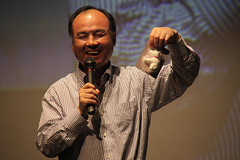 Asia must lift its game if it is to harness the potential of its cities as hubs of innovation, writes John West.

Today, modern Asia faces a new innovation challenge. Economies like Singapore. Hong Kong, Japan, Korea and Taiwan have long reached the point where innovation should be a principal motor of economic growth (and China is not very far behind in the innovation imperative). They have passed through the "copycat" stage of development, where much progress up the development ladder can be made by absorbing technology, knowledge and lessons from more advanced countries.

Urbanization is key to innovation -- meaning “new” or “significantly improved” products, processes, marketing or organizations -- because cities are the human hubs where most innovation takes place. More than 80% of the populations of these five Asian economies now live in urban centers. And most of the world's megacities also happen to be found in Asia. Tokyo is the world's biggest city with a population of 38 million, followed by Delhi at 26 million, and Shanghai at 24 million.

Igniting the spark of innovation

Innovation analysts highlight the necessity of developing an "ecosystem" that fosters innovation. There is not one magic bullet.

The OECD emphasizes things like: knowledge and skills to generate new ideas and technologies, bring them to the market, and implement them in the workplace; an open and competitive business environment; public investment in research; government incentives for business investment; and open access and participation in the digital economy.

A Melbourne-based organization "2thinknow" has a different take, as it emphasizes three preconditions for innovation, namely cultural assets, human infrastructure, and networked markets.

Cultural assets include arts, culture, sports, music, environment, parks and spaces -- they inspire new ideas. Human infrastructure means universities and businesses which help with the development of ideas. And networked markets through physical trade or digital communication enable the sharing of ideas with the rest of the world.

Our take is that a melting pot of artists, academics and investors, men and women, young and old, and of different ethnic and cultural backgrounds, provides a potent force for generating and realizing new ideas. It also helps if there is an environment which tolerates or even encourages differences, rather than conformity, promotes risk taking, and does not instantly punish making mistakes.

How do Asia's leading cities stack up in terms of the innovation imperative?

This is an impossible question to answer accurately and thoroughly. But let’s have a look at a few indicators.

Universities are key for innovation. They produce our brightest minds, they are the cradle of much fundamental research, and many of the best ones work in partnership both with the business sector and internationally.

The livability of our cities is key to attracting the “creative class”, including from overseas, who typically drive the innovation process. So how “livable” are Asian cities?

Singapore is the most livable Asian city, according to Mercer, but is well behind many cities from Europe, Canada and Australia. It only ranks 26th in the world, based on Mercer’s assessment of the political, economic, socio-cultural and natural environment, education, health and other public services.

The low ranking for the livability of many Asian cities is hardly surprising in light of the horrendous pollution, the congestion and insecurity that many have. Eleven of the world's 20 most polluted cities are in Asia. Air pollution contributes to the premature death of half a million Asians each year.

And as my friend Asit Biswas has argued, the truly great cities have a soul. This is where high-tech, squeaky-clean cities like Singapore or Korea’s Songdo miss the boat.

An open society and political system are crucial for the innovation imperative. Innovators need to be able to think the unthinkable, say the unsayable and do the undoable. Japan and Korea are regarded as free and open societies by most observers like Freedom House, even if there has been backsliding under the regimes of Japan’s Shinzo Abe, and Korea’s Park Geun-hye. Taiwan has a vibrant democracy, but the island’s freedom is constantly and increasingly undermined by interference from Beijing.

The situation is much more dire for the other economies. Freedom House ranks Hong Kong as “partly free”, with things only getting worse due to recent restrictions on freedom of the press and freedom of assembly. Beijing’s nefarious influence over Hong Kong’s freedoms is only growing, especially in light of extraterritorial abductions.

Singapore is “partly free” case with the “soft authoritarian” regime maintaining restrictions over freedom of speech, Internet and assembly, especially in light of the next general election is scheduled for January 2017. Such freedoms are very much worse in the “unfree China”, and have only been deteriorating under the leadership of President Xi Jinping.

Overall, Asian cities and countries are laggards in the global innovation race, even though the Boston Consulting Group ranks companies like Samsung, Toyota, Tencent, SoftBank, Fast Retailing, Tata Motors, Hitachi, Huawei and Lenovo in its top 50 most innovative companies. Innovation in Asia rarely involves disruptive, major breakthroughs, and tends to be “incremental innovation” which adapts and perfects innovations coming from elsewhere.

Limitations of the Asian model

Over the years, there has been much analysis and speculation on the limitations of the Asian model, a few of which I will conclude with here.

Widespread government controls and regulations in many Asian countries stifle freedom of thought and action. Economies are dominated by established big business with close links to government, which protects their dominant positions. Most small and medium enterprises tend to be subcontractors for large enterprises, rather than independent drivers of innovation. And financial systems are dominated by banks which service mainly large enterprises -- risk capital for innovative startups is all too scarce.

Education systems tend to emphasise rote learning and memorisation rather than critical thinking. All too often academics are locked away in prestigious ivory towers, rather than working in partnership with business. Societies are usually male-dominated, hierarchical, conservative and conformist, rather than risk-taking. And migrants tend to be marginalized, rather than providing the power of diversity.

Most Asian governments are very conscious of their innovation imperative. Some even speak of the desire to create a new Steve Jobs or Bill Gates. But they are also uncomfortable with the free and open societies which provide the fertile soil that allowed such innovation leaders to flourish. Success stories like Chinese artist Ai Weiwei, SoftBank’s Masayoshi Son or even Grameen Bank’s Muhammad Yunus are too often seen as threats than social assets.

As the old saying goes, if you want to make an omelette, you have to break some eggs. In this context, many Asian countries need to take new approaches in governing their urban economies and societies, if they are to realise the innovation potential of the Asian Century.
Tags: asia, innovation, urbanization