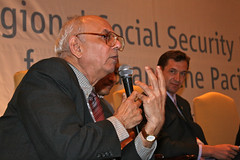 How to approach setting the rate structure for India’s GST?

How to approach setting the rate structure for India’s GST ask Mukul Asher & Azad Singh Bali.
Policy deliberations on the appropriate rate of India’s proposed GST have almost exclusively focused on a so-called Revenue Neutral Rate (RNR). In addition to the difficulties in modelling the RNR particularly when the tax-base and design parameters are yet to be decided, we argue that the RNR is an inappropriate basis for designing the rate structure. It is puzzling that while there is consensus that the current system is inefficient and unfair, with disproportionate high administrative and compliance costs constraining India’s growth and competitiveness, the policy debates continues to emphasize RNR for the GST. Why should the proposed GST –designed to overcome the limitations of the current taxes on domestic goods and services (i.e. consumption taxes) – aim to obtain revenue equivalent to that from the current distorted system?

The public financial management literature provides neither theoretical nor empirical rationale for structuring the GST rate in this manner. The importance of this point is accentuated by the fact that the proposed GST has the potential to expand the tax base, and it is the combination of tax base and tax rate of how much revenue is obtained from a given tax. Moreover, it is not appropriate to regard the current public financial management practices in India of not taking into account the potential of better expenditure management, and raising revenue from more productive use of state assets.

The Nature of Distortions Explained

There is broad consensus that India’s current system of taxes on domestic goods and services (henceforth shortened to consumption taxes) significantly distorts the allocation of resources, methods of doing business, and consumer choices as there is non-uniformity in taxation of different goods and services, and between good and services. The Constitutional restriction that States cannot levy sales tax on services, and the Union government cannot levy sales tax on goods has contributed to the above outcome, and has significantly increased the administrative and compliance costs of consumption taxes. This restriction has also contributed to making India’s goods-producing or manufacturing sector less competitive.

A break-down of India’s current taxes suggests that the goods-producing sector generates a substantially higher proportion of tax revenue relative to its share in national income, with the reverse being true for services. This has made the system quite inequitable. The most recent data from the Indian Public Finance Statistics suggests the combined taxes of union and state governments on goods accounted for 6.8 percent of GDP in 2014-15, while the share of manufacturing in India’s GDP was around 17 percent according to the World Bank. In contrast, the share of services in the tax revenue was 1.7 percent of GDP while the share of services in GDP was 52 percent. There is an empirical tendency of the share of household budget spent on services to increase as income increases, and vice-versa for goods. This strongly suggests that consumption taxes which India has established burdens the lower half of the income groups to a greater extent than the upper half. This ironically was done in the name of socialism!

Under the current tax system, each State government has its own sales and excise tax laws and administrative structures. This unduly increases administrative and compliance costs in turn increasing the cost and reduces the ease of doing business. This is illustrated by businesses having to comply with 29 different state tax laws, excise taxes at both Union and State levels, and service taxes. The Chief Economist of the World Bank, Kaushik Basu has observed that Indian freight trucks spend 60% of travel time between cities waiting at check posts to pay taxes and clear formalities. This contributes to India's logistics costs being 2 to 3 times the international benchmark.

The international experience suggests that compliance costs of GST or Value Added Tax (VAT) reduces with increases in turnover. The current tax regime therefore over burdens small to medium enterprises, which the government is looking to for driving economic growth and generating employment.

In the current digital and information age it is increasingly difficult to differentiate between goods and services. For example, the value of the mobile phone as a good is fairly low, as its value is derived primarily from the software it uses, which is a service. Separate laws and regulations on goods from services tend to result in disproportionately large tax litigation, burdening the courts, tax administration and business management.

The outcome is that Indian businesses become less competitive as they need to spend much greater proportion of their time, energy and resources to manage policy and regulatory environment rather than focusing on their businesses. This rather high opportunity cost of the distorted consumption tax system in India deserves greater awareness and research efforts to estimate its quantitative magnitudes.

Considerations in setting the GST rate

In setting a tax rate for a particular tax such as the GST the relevant consideration should include the nature of the overall tax system; the need for revenue generation in relation to expenditure to ensure macroeconomic and fiscal sustainability; the definition of the tax base (general recommendation is to have as broad a base as possible and low a nominal rate as possible as distortions from taxes increase by the square of the nominal tax rate); and with increasing global integration, the corresponding effective tax rates levied by India’s trading partners and competitors.

There are trade-offs involved amongst these considerations and the debate should be about what kind of trade-offs would be most appropriate in setting the tax rate structure for the proposed GST. The rate structure debate therefore should not be undertaken in isolation but within the overall context of India’s growth strategy, global integration, and overall public financial management.

India is far more integrated with the global economy than is perceived. In 2014, India’s total trade in goods and services was 54 percent of GDP, and must therefore take into account the equivalent GST or Value Added Tax rates being levied by its competitors. Its Asian competitors such as Thailand, Viet Nam, South Korea, Japan and Singapore have much lower rates (around 10 percent) than what is being considered in India. The OECD’s un-weighted rate in 2012 was about 19 percent.

If the combined GST rate in India (levied at both Union and State levels) exceeds the OECD’s rate, it will have adverse effects India’s competitiveness. This will also result in pressures to narrow the tax base through exemptions and reduced rates, diluting the benefits of GST.

The States in India as well as the Union government should not set the GST rate without examining the possibilities of better expenditure management and generating expenditure management, and generating revenue from more productive use of state assets. The potential savings in economic resource costs and in reduction in compliance and administrative costs of businesses must be estimated and taken into account in setting the rates.

The above analysis strongly suggests that the narrow view of the GST just in terms of raising money alone is too restrictive. A better and more informed public debate on the GST rate structure is needed.