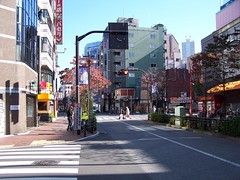 Chinese investors snap up Japanese real estate, reports John West.
Property in cities such as Tokyo and Nagasaki are increasingly attractive to Chinese investors, who are lured by solid returns and Japan’s strong rule of law. However, political tensions are inhibiting the market's potential for growth.

In recent years, Chinese investors have become an important force in international real estate markets, especially in the US, UK, Australia, Singapore and Hong Kong. Despite the ongoing political tensions between China and Japan, Chinese investors are now moving into the Japanese market, where both prices and overall foreign ownership are much lower than in other international markets.

“Although there is no hard data, Chinese investors may have accounted for about 5% to 10% of Japanese residential real estate business in the past couple of years, especially in the liquid secondary market,” said Masahiro Mochizuki, a Tokyo-based real estate analyst at Credit Suisse. “Their purchases have been concentrated in landmark projects in large cities such as Tokyo, Osaka, Nagoya, Fukuoka and Sapporo.”

Bestone is one of several real estate agents in Ikebukuro (the location of Tokyo’s Chinatown) that specialises in selling apartments to investors from China. “About 90% of our business is with Chinese middle-class investors,” said Ka Wai Cheung, an investment consultant at Bestone. “They are attracted by the much higher rates of return in the Japanese rental market.”

“Chinese investors have also been active in the commercial real estate market, where they may have been responsible for 10% to 20% of transactions in recent times,” added Mr Mochizuki.

“There have indeed been an increasing number of high-profile Chinese transactions in the past couple of years,” said Andy Hurfurt, executive director for investment consulting at the Tokyo office of CBRE, a global commercial real estate company.

Mr Hurfurt highlighted several deals including Greenland Holding’s acquisition of Chiba Port Square, a hotel, retail and office property; Fosun Group’s purchase of the Hoshino Resort Tomamu in central Hokkaido; and the purchase by China Investment Corp (a sovereign wealth fund) of a major Tokyo office complex. He expects more deals to be realised as companies such as Anbang Insurance and Ping An Insurance have been actively looking for opportunities.

“Japanese real estate has become an attractive option for Chinese investors over the past three years in light of the 30% fall in the value of the yen, and the more than tripling in tourist arrivals from China,” said Mr Hurfurt. “As Chinese real estate investors mature, it is also natural that they explore more overseas, and Japan is the largest nearby market.”

“The Japanese market offers Chinese real estate investors the opportunity to further diversify their portfolios,” said Wataru Sakakibara, a senior consultant at the Nomura Research Institute. “Overall, however, Chinese investors have not yet been as strong an influence in Japanese real estate as they have been in other international markets,” added Mr Mochizuki.

Looking ahead, there seem to be good prospects for continued Chinese interest in the Japanese market.

“With the rising number of middle-class Chinese, we will likely see continued growth in their real estate investments,” said Mr Mochizuki. “Japan’s strong rule of law can offer Chinese investors good protection of their wealth over the longer term,” he added.

“There is enormous potential for more international business, including for real estate, between China and Japan, if only the two countries could resolve more of their political differences,” said Yuqing Xing, a Chinese professor based at Tokyo’s National Graduate Institute for Policy Studies.

This article, written by John West, was first published by FDI-Intelligence, a Financial Times magazine.