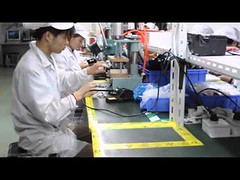 Seamus Grimes has shared with us some recent work on China’s increasing participation in the ICT global value chain.
The global value chain (GVC) of the information and communications technology (ICT) sector has undergone considerable evolution in recent decades, with China’s participation in this chain growing in significance. Although the most innovative aspects associated with shaping the trajectory of internet-related activities continue to be dominated by western technology corporations, the centre of gravity of most of the manufacturing and assembly work of the key products and devices has shifted to Asia, with China playing an increasingly important role in production. China’s role, however, continues to be a relatively subordinate one.

Having failed to achieve significant technology transfer from foreign companies in China through insisting on the establishment of joint ventures with Chinese companies, state policy more recently has focused on the promotion of indigenous innovation, while using its rapidly growing market as a leverage for its relationship with foreign investors. The challenge for Chinese policymakers is to find the right balance between China’s ongoing dependence on foreign technology and the collaborative role it needs to develop with major technology corporations in its deepening involvement in the ICT GVC. In pushing for technical standards based on indigenous innovation China faces demands for compliance with international norms both from abroad and from within the country, while attempting to achieve a certain level of autonomy for the development of Chinese firms.

In a recently published paper with Yutao Sun, our analysis illustrates how western companies, together with companies from Japan, Korea and Taiwan continue to dominate the upper reaches of the ICT value chain, and despite locating much of their production activity in China, have succeeded in avoiding any major leakage of intellectual property to local competitors. Although the technological trajectory of the ICT global value chain continues to be controlled by these companies, the significant shift in ICT production to mainland China raises questions about the future evolution of the value chain, and whether a tipping point has been reached in relation to China’s possible indispensable role in its development.

Among these implications is the extent to which major global technology corporations can exploit the comparative advantages of China while continuing to ensure its subordinate role in the global value chain. While some commentators on the relationship between the Chinese state and foreign investors tend to emphasise the obvious tensions that can arise in the bargaining process, our data analysis, including company interviews, suggests a more nuanced and complex relationship.

Analysis of trade data relating to the most significant importing and exporting ICT companies in China between 2001 and 2012 provide useful insights into both the evolution of China’s role in the value chain, and the role played by mainland companies. In addition to the significant growth in the volume of ICT activity during this period, there has been an important shift by foreign companies from using China primarily as a low cost export platform to an increased focus on China as a rapidly growing market for ICT products and services. China’s increased role in the ICT value chain has been closely related to the growth in outsourcing and offshoring of ICT production, assembly and testing by major global technology corporations to the Chinese mainland.

To some extent, the main beneficiaries of this enormous shift in the centre of gravity of ICT production have been Taiwanese companies, and in particular Foxconn, which by far is the world leader in contract manufacturing on behalf of global technology companies. These Original Design Manufacturing companies, however, operate under a regime of very tight control of their major clients, who also ensure that profit margins are razor thin. Foxconn’s rise during this period has been particularly associated with Apple’s business model of outsourcing 100% of its production to China, while ensuring no leakage of intellectual property through stringently controlling its contract manufacturers and supplier companies.

Because of the importance of intellectual property and innovation in controlling the technological trajectory of the ICT sector, the role played by high value added component companies in areas like semiconductors and hard disk drives, and more recently applications processors for mobile devices is crucial. Our data reveal that, apart from the dominant role of Korean and Taiwanese companies in the Thin-film-transistor liquid-crystal display (TFT-LCD) display area, western companies continue to play an important role as component suppliers, with Samsung being both a significant own brand company as well as a major supplier.

Apart from Foxconn in the Original Design Manufacturing sector, Samsung, with its rather exceptional in-house production model, is the other company that dominates the trade data across the whole spectrum of activity. The lack of technological progress to date by mainland companies in generating significant inputs from indigenous innovation is obvious, and some commentators claim that policymakers have begun to appreciate the limits of a growth path driven by policy-induced high-tech exports.

Despite a poor performance in achieving any significant control in either ICT assembly or in the supply of key components, a small number of Chinese companies have become highly successful global brands. While questions continue to be raised about the extent of state regulation of China’s domestic market, and bearing in mind their reliance to some extent on the capabilities of foreign suppliers, the significant progress made by these Chinese brands should be acknowledged.

Our data indicate that over time, these companies have succeeded in dislodging significant western companies that were initially highly successful in China from the lists of top ICT traders in China. The considerable strides made by these companies which is reflected in their ability to compete globally is further attested to by our company management interviews. But rather than falling into a simplistic binary model of foreign and mainland companies, both our data and company interviews suggest a more nuanced picture of significant interconnections between many types of companies through client relationships, joint ventures and mergers and acquisitions.

To some extent the success of Chinese brands is exaggerated by the invisibility of major global brands such as Apple, whose production is masked by Original Design Manufacturing company trade. The success of these Chinese brands, however, raises interesting questions about the ability of indigenous companies in an exceptionally rapidly growing market of enormous scale, to displace formerly successful brands in what is, for them, a very different marketplace.

With the continuing shifts in the ICT global value chain in an era of mobile devices, cloud computing and expanding ecommerce, the potential for Chinese companies for creating more intense competition for established global corporations is considerable. Whether they can gain greater market penetration globally without the necessary progress in vital areas of intellectual property remains to be seen.