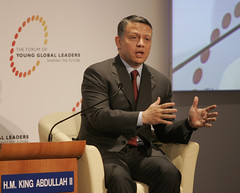 Jordan reaches out to take its ICT sector to the next level writes John West.
A 1999 'reach initiative' transformed Jordan's ICT sector, which now accounts for more than 10% of the country's GDP. Following the launch of a sequel initiative, the country is hoping it can further build on this success.

“When His Majesty King Abdullah ascended the throne in 1999, he focused his attention on transforming Jordan into a knowledge economy,” says Karim Kawar, president of local conglomerate Kawar Group. “The king believed that Jordan, a country with scarce natural resources, should exploit its biggest resource, its human capital.”

Mr Kawar was the architect of what became known as the 'reach initiative', which developed a strategy and action plan for the transformation of the ICT industry in Jordan. This was a public-private partnership, involving the creation of the Ministry of Information and Communications Technology as well as the ICT Association of Jordan, known as int@j, an industry support association.

Jordan’s ICT sector has achieved impressive results over the past 15 years, benefiting from its well-educated and tech-savvy workforce, its business-friendly ecosystem, and political stability. The sector now accounts for some 12% of the country's GDP, up from 2%, based on government statistics. It has created 84,000 jobs, representing 6% of the labour force, with women making up some 30% of Jordan’s tech workforce.

Jordan has more than 600 tech companies, the largest number of any Arab country, and more than 300 of these are start-ups. These companies are active across a wide range of activities, such as software development, business solutions, finance, health, games and animation.

Tech exports increased eightfold from 2001 to 2013, with the major markets being Saudi Arabia, the US, Iraq, the United Arab Emirates and the UK. “Since Jordan is a small market, our tech firms must scale up and tackle export markets to achieve real success”, says Marwan Juma, Jordan's former minister of ICT.

“Jordan has a vibrant social media scene, with two-thirds of Jordanians using platforms such as Facebook, Twitter, LinkedIn and Instagram,” says Hasan Hamad, a social entrepreneur. “Indeed, social media has become an important channel of communication between the royal family and Jordan’s citizens.”

“Jordan now produces more than three-quarters of the global online Arabic content,” says Mr Kawar. “As an open and inclusive country, Jordan can help contribute to regional security through the moderate values conveyed in its online content.” Mr Kawar also highlights the important role of Jordanians in the diaspora in other Middle East countries, as well as in Silicon Valley in the US, in driving the growth of Jordan’s tech sector.

One successful Jordanian tech company is IrisGuard, which manufactures iris biometrics and iris recognition camera systems for commercial and government security solutions. The UN High Commission for Refugees is now using IrisGuard’s iris-recognition technology for the registration of Syrian refugees in Jordan. The technology is also being used to enable refugees to withdraw money from ATMs without a card, pin or phone.

Jordan has many other success stories such as Kinz, a source of corporate intelligence; Rubicon, a global transmedia company specialising in animated entertainment; MarkaVIP, an online shopping platform; and Madfooat, an e-payments service.

More than 100 Jordanian start-ups have been fuelled by Oasis500, a leading early-stage and seed investment company, the first of its kind in the Middle East and north Africa (MENA) region. “Our programme at Oasis500 includes entrepreneurship training, mentorship guidance, business incubation and acceleration, and additional follow-on investment and funding if required, turning new business ideas into start-ups and helping existing entrepreneurs grow their companies with our angel investor and mentor networks,” says Yousef Hamidaddin, CEO of Oasis500. “Not only have we boosted Jordan’s tech entrepreneurship, we have also generated an excellent rate of return for our investors.”

The creation of Oasis500 was also an initiative of King Abdullah to help improve the tech start-up ecosystem in Jordan and the MENA region. Some 20% of its investments have been in start-ups coming from other MENA countries. Today, the executive chairman of Oasis500 is Usama M Fayyad, who is also chief data officer and group managing director at Barclays.

A number of leading multinational tech companies, such as Cisco, Microsoft and Oracle, have established operations in Jordan. “Cisco was quick to see the great potential of Jordan’s ICT sector and developed a strategic partnership with the country,” says Bashar Al Emam, territory business manager for Jordan and Palestine at Cisco Systems.

“We are also committed to fostering Jordan’s development, notably through Cisco networking academies, which have trained more than 12,000 Jordanians since 1999, of whom 35% are females.”

Despite the impressive progress made, Jordan’s ICT sector has been slowing down over the past couple of years. Competition from regional and international companies has been increasing, and Jordan has suffered from brain drain. The Arab Spring and the conflict in Syria have also affected Jordan’s economy. And, as Mr Kawar says, Jordan has also been stagnating or slipping backwards in international league tables, such as the World Economic Forum’s Global Competitiveness Report, the Networked Readiness Index, as well as the World Bank’s Doing Business Survey.

This is why King Abdullah initiated the launch of a new 'reach' initiative that will provide a roadmap to make Jordan a regional ICT hub by the year 2025. 'Reach 2025' will focus on further developing human capital, improving the regulatory environment and strengthening the capacity of companies to export.

“We are confident that the new reach initiative will come up with proposals that will enable Jordan’s tech sector to regain momentum and to achieve its potential,” says Mr Kawar, who is again its chief architect. Mr Juma emphasises that the “development of the tech sector is essential to helping create enough jobs for the large number of Jordanian youth entering the labour market in the coming years”.

Jordan’s ICT sector also stands to benefit from enhanced co-operation with India, building on the existing business of Jordanian ICT companies and users with their Indian counterparts. For example, on the occasion of a state visit in October 2015 by Indian president Shri Pranab Mukherjee, a memorandum of understanding was signed between the Indian and Jordanian governments on co-operation in the field of IT and electronics.

“As a global hub and leader in the ICT sector, India intends to work with Jordan to harness the two countries’ respective comparative advantages, especially in other Middle Eastern markets,” says Anil Trigunayat, India’s ambassador to Jordan.

This article was written by John West, Executive Director, Asian Century Institute. It was first published by FDI-Intelligence, a Financial Times magazine, on 10 December 2015.

- Jordan reaches out to take its ICT sector to the next level. FDI-Intelligence, 10 December, 2015.