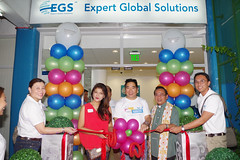 The advances and diffusion of information technology have opened up new opportunities for outsourcing and offshoring of many business services. Services which are most offshorable, are those which are routine, and which are electronically deliverable and don't require face-to-face contact with customers, as does a haircut.

The BPO sector began with call centers, and then extended to tele-marketing, accounting, legal, human resources, software development, medical transcription, etc. In other words, a services global value chain (GVC) has blossomed to join the much celebrated manufacturing GVCs. Industries typically served by the BPO sector include travel, banking and insurance, accounting and legal, telecommunications, and information technology.

India and the Philippines, more than any other Asian countries, have been able to seize the opportunities of the BPO sector thanks to several factors -- good English language skills, low wage costs, and a large youthful workforce to choose from. For some time, India was the BPO front runner. But according to market reports, the Philippines has leapt ahead to become Asia's call center leader, with India losing a great chunk of its business to the Philippines. Citibank, Safeway, Chevron and Aetna are just a few of the international corporations to have BPO operations in the Philippines.

Filipinos, who mainly service the American market, reportedly have a better mastery of American English, and a greater cultural affinity with America than do Indians. The Philippines also produce more high quality graduates, especially in the accounting and legal fields.

The Philippine government has also provided greater support to the BPO sector than the Indian government. Most BPO offices are designated as special economic zones, with benefits like tax holidays, duty-free import of capital equipment, simplified import and export procedures, and freedom to employ foreign nationals. The passage of the Data Privacy Act has also put in place international data privacy standards, which are beneficial especially for the multitude of sensitive information like banking and insurance details handled by the BPO sector.

Call centers and associated BPO services now employ more than one million Filipinos, an increase of ten times over the past decade. The BPO sector, which has become the country's fastest growing industry, will bring in over $20 billion in revenues in 2015, not far behind the $26 billion the country will likely earn in migrants' remittances. However, the majority of these revenues come from voice call centers, as opposed to more technical IT outsourcing where India still retains an edge.

Overall, BPO sector now makes up 6% of the Philippines' GDP. But it has tended to be an economic enclave, with very little interaction with the rest of the economy, according to an Asian Development Bank study. Overall, it is neither a large buyer nor provider of inputs to other sectors of the economy. Its main impacts have been through the retail and real estate sectors.

Could BPO activities become a key driver of economic development in India and the Philippines, as manufacturing has been in countries like Japan, Korea and China?

Most regrettably, the BPO sector seems unlikely to become a key driver of economic development, despite the sector's many benefits. The BPO sector only offers employment to the relatively well educated, and not to the vast swathe of lower-skilled people who need jobs. Only 2% of the Philippine work force is employed in the BPO sector.

Both India and the Philippines need a manufacturing renaissance to offer employment to the lower-skilled. In both cases, this would require a much more investor-friendly environment, and a massive improvement in their physical infrastructure. It is thus not surprising that the Philippines' BPO boom has had little or no effect on the countries large outward migration.

The BPO sector is also problematic in other ways. Overqualified workers undertake rather low-skilled jobs, since even call centers usually require at least a two-year college education and excellent oral and written English. Professionals such as doctors are attracted by the higher salaries, and can waste their hard-earned education.

Many call center jobs entail working through the night, and doing monotonous tasks, and are not compatible with healthy living or a family life. This means that high staff turnover and job hopping are endemic. Moreover, such jobs usually do not offer the possibility of a career.

The opportunity does exist to exploit more benefits, by moving up the BPO value chain, and doing higher value added activities. And the Philippines has been doing just that in the areas of web design, software development and animation.

But as with the case of manufacturing GVCs, climbing further up the value chain will require much greater investments in human capital, and infrastructure to attract greater foreign investment in higher value added activities, as well as fostering a more entrepreneurial culture at home.

Remaining competitive in the BPO sector will also be a constant challenge. BPO activities can also have a footloose character, as evidenced by the rapid rise in the Filipino BPO sector at the expense of India. Other countries like China and Vietnam are now moving into the BPO market, and competition will no doubt remain ruthless. It is thus now the time to give small Philippine companies the chance to participate more actively in the BPO sector, such as by offering them the same incentives that are currently being offered to foreign-owned companies.