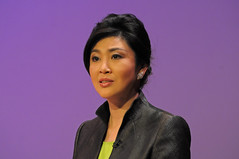 The Rice and Fall of Yingluck Shinawatra

The former Thai prime minister faces a potential jail term over a bungled rice scheme, according to Asit K. Biswas, Matthew J. Kastner and Cecilia Tortajada.
It was simple math for former businesswoman and Thai Prime Minister Yingluck Shinawatra to win the July 2011 election and lead the Pheu Thai Party: Guarantee the procurement price of rice paddy for farmers at THB 15,000 (roughly $450) per ton. This was 4,000 baht above the rate set by the previous Democrat Party and almost 50 percent above the global market price. Since almost 40 percent of Thailand’s labor force is in agriculture, and the majority of those are in rice, Yingluck sailed to victory and was sworn into office on August 10, 2011.

The strategy was a simplistic but unrealistic three-step process: Buy rice from farmers at inflated prices, stockpile it to reduce global supply and drive up global prices, and resell it later at a higher price to recover the initial outlay.

At the time, Thailand was the largest rice exporter in the world, controlling 30 percent of the market. Shinawatra thought this market share was large enough to manipulate global prices. Whether it was naivety, political pandering, poor judgment, or likely a combination of all three, this plan backfired spectacularly as other countries, notably India and Vietnam, promptly filled the Thai void from the end of 2011 to 2013.

As Thailand began to stockpile rice, it had to build new warehouses to hold this significant extra tonnage. Closing stocks from the 2011-2012 harvest jumped 68 percent over the 2010-2011 harvest. The following year, stockpiles jumped an additional 34 percent. By the end of 2013, Thailand was holding onto 17.5 million metric tons of rice, running out of places to store it, and confidence in its quality was diminishing by the month globally. Concurrently, exports decreased 35 percent from 2011 to 2012 and bottomed out in 2013 at 39 percent lower compared to the 2011 year.

There were a few months when there were glimmers of hope for Thailand. Even before the scheme was implemented, milled rice prices increased 5.4 percent in July to $546/ton, when Shinawatra was elected. Prices peaked in September of that year at $615. For all of 2012, the lowest price was $541 in January. However, the price guaranteed to farmers was 15,000 baht per ton for unmilled rice, whereas the market prices were formilled rice. Milling is the process of removing the hulls and bran of the rice kernel, which on average removes about a third of the weight of the paddy rice. Thus, even the highest market price of $615 in 2012 translates to approximately $410 per ton for unmilled rice. The market price also encompasses transport to point of sale, milling, and storage expenses, which further erode the value of unmilled paddy rice, to below $410. In order to make back the money the government was spending, milled rice prices had to be around $830 per ton, instead of the 2012 average of $573.

Impractical from the start, Shinawatra’s plan began to have adverse impacts on Thailand’s budget. In its first year, the cost was $4.4 billion, or 1.2 percent of 2012 national GDP. The Thai Development Research Institute (TDRI), an independent think tank, estimates the costs of the first year to have been between $5.9 to $7.1 billion. Official figures of the total cost of the plan have not been released by the government, but estimates range from $8 to $20 billion.

Even if the most conservative estimate of costs provided by the Thai officials is considered, this program hascost Thailand a significant amount of money. Overall, though, the program is not that expensive. There are countless examples of governments around the world investing in much costlier failed projects. So where is the controversy? How did this lead to the downfall of Shinawatra.

The cost of the program is not the main reason why Shinawatra eventually faced impeachment. The political tension in Thailand goes back almost a decade earlier, to when Thaksin Shinawatra, Yingluck’s older brother and a former prime minister himself, was removed in a military coup and convicted of corruption. He now lives in exile. If he was to return to Thailand, he would have to serve two years in jail for corruption. Opponents of Yingluck claim she is a mouthpiece for her exiled brother and represents the elite corruption that prevailed then in Thailand. Several factors occurred during the period from the end of 2013 to mid-2014 that resulted in Yingluck being impeached. She now faces up to 10 years in jail.

On December 9, 2013, the Democrat (opposition party) representatives in the House of Representatives left their seats. This prompted Shinawatra to dissolve the entire House and call an election for February 2014. The opposition party left the House not because of the rice pledging scheme, but rather over several other politically sensitive issues, including an amnesty bill that would have absolved Thaksin of his corruption crimes and allow him to return to Thailand. The bill passed the House of Representatives on November 1, 2013, triggering small protests in Bangkok. The Senate then unanimously rejected the bill on November 11. Despite the amnesty bill’s failure to pass, it initiated an anti-government movement that soon snowballed out of control.

Coincidentally, another politically volatile event was occurring. On November 20, 2013, the Constitutional Court ruled that an amendment to the 2007 Constitution – previously passed as a draft and waiting for the King’s signature – did not follow procedural requirements and that the content was at any rate unconstitutional. The most offensive part of the amendment allowed relatives of representatives to become senators, increasing nepotism among the political elites. The Pheu Thai Party rejected the court’s decision and asserted the legality of the amendment, prompting more protestors to take to the streets of Bangkok at the end of November. Eventually, Shinawatra withdrew the draft on December 8 before the King signed it into law, but this appeased neither opposition party nor protestors.

On December 9, when the House of Representatives no longer existed, the authority of the Minister of Finance to authorize payments on the rice pledging scheme had to be stopped completely. On January 31, 2014, the government defaulted on its payments to the farmers for money owed to them from the October 2013 harvest.

While all these events were taking place, the National Anti-Corruption Commission (NACC) was investigating the scheme on the grounds that it was corrupt on multiple levels and that Shinawatra was aware of these illegalities. On February 18, the NACC released a statement charging Shinawatra with negligence and dereliction of duty pertaining to the rice pledging scheme. This did not remove her from office, but it did trigger further proceedings on her impeachment.

If these events were not enough, a “judicial coup” occurred on May 7 2014 that effectively removed Shinawatra from office. This related to the removal of Thawil Pliensri, shortly after Shinawatra’s 2011 election win, as National Security Chief, replacing him with Thaksin’s former husband’s older brother (her brother in law), Potjaman Shinawatra. The Constitutional Court asserted this move was an abuse of power, since Pliensri had not been negligent in fulfilling his duties. The government was expecting this ruling and the Minister of Commerce became caretaker prime minister the same day.

Clearly, many things led to the protests and political unrest in Thailand. To recap, there is the amnesty bill for Shinawatra’s brother Thaksin, rejection of the Constitutional Court’s declaration that an amendment to the constitution fostering nepotism was unconstitutional, the replacement of Pliensri with Shinawatra’s former brother in law, and Shinawatra’s dereliction of duty to farmers who were owed money under the rice pledging scheme.

All these culminated in the military coup that occurred on May 22, 2014, which removed the government and placed General Prayuth Chan-ocha in charge, where he remains. With the exception of the rice pledging scheme, all of the issues Shinawatra faced were almost expected, as they were all motivated by people or deliberated on by a judiciary generally thought to be against Shinawatra. The failure of the rice pledging scheme, however, and the absence of payments to the farmers, galvanized the movement, as those protesting were mostly voters who had originally elected Shinawatra.

Although there were multiple events that led to the coup and removal of Shinawatra, the rice pledging scheme is still the most threatening to her future political aspirations and freedom. On January 23, 2015, the National Legislative Assembly (NLA), largely backed by the ruling junta, impeached her with a vote of 190 to 18. The decision prohibits her from participating in Thai politics for the next five years.

Even more sobering, Shinawatra faces a criminal trial on May 19 for the failures of the rice pledging scheme. If found guilty, she faces up to 10 years in prison. The court comprises of nine members that have all delivered verdicts against Thaksin Shinawatra (her older brother in exile) previously, justifying claims by Shinawatra’s supporters that the court is partisan.

The outcome for Shinawatra appears bleak and most analysts anticipate she will be convicted. If she receives the maximum sentence of 10 years, it will be politically volatile. It may rally her supporters and incite violence while Shinawatra sits in Thai prison, seen as a martyr. Further, it could increase tensions with the United States, a major ally, that has already claimed that Yingluck’s impeachment is politically motivated.

The court has a fine line to walk. If its sentence is too harsh, Shinawatra’s rural supporters in the north and northeast may protest and claim the military is overstepping. Any unrest would not only threaten the Thai people but could damage the work the military has done to regain the confidence of the international community that Thailand is a safe and stable place, worthy of foreign tourists and investment. If the sentence is too weak, Shinawatra could reignite pro-Thaksin/Yingluck supporters for the anticipated 2016 general election.

For future leaders of Thailand and other countries, the lessons from the failures of Thailand’s rice pledging scheme should be obvious: Steer clear of any policy resembling market manipulation. Although Shinawatra’s own future is far less obvious, one thing that can be concluded from this episode: You can’t have your rice and make a profit too.

This article was originally published by The Diplomat on May 21, 2015.

- The Rice and Fall of Yingluck Shinawatra, Asit K. Biswas, Matthew J. Kastner and Cecilia Tortajada. The Diplomat, May 21, 2015.