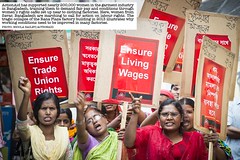 Bangladesh is one of Asia's very poorest countries, with an annual GDP per capita of merely $1600 in purchasing power parity terms. Poverty is endemic. Some 43% of the population live on less than $1.25 a day, while 77% live on less than $2 a day. Its population of 158 million is densely packed into this small country which is often afflicted by natural disasters.

In many ways, Bangladesh seems a country with little hope. It is ranked one of the world's most corrupt countries by Transparency International -- 145th out of 174 on its Corruption Perceptions Index. It also has poor competitiveness according to the World Economic Forum, which places it 109 out of 144. The plight of the country's women seems desperate. Bangladesh has one of the world's lowest rankings for female economic participation and opportunity, educational attainment, and health and survival, also according to the World Economic Forum.

And yet, seemingly against the odds, things have been improving in this country, born a little more than four decades ago following the Bangladesh Liberation War. Economic growth has averaged more than 5% since 1990. The share of the population living in poverty has fallen sharply. Life expectancy has leapt from 60 to 71, while infant, child and maternal mortality rates have improved dramatically.

One key factor in Bangladesh's improved conditions, especially for women, has been its success as an exporter of "ready-made garments" (RMG), thanks in large part to its free access to the EU market. The EU is by far Bangladesh's largest export market for RMGs, followed by the US.

RMGs account for over 80% of Bangladesh's total exports, and more than 10% of GDP. The industry employs some 4.2 million people, of whom about 80% are women. It thus contributed greatly to the empowerment of women in this very traditional society. It also indirectly supports as many as 40 million Bangladeshis, about 25% of the population. Bangladesh's clothing industry is only second to China's in size

But the dark side of Bangladesh's RMG industry was brought to the attention of the whole world in April 2013, when Rana Plaza, a building housing several RMG factories, collapsed killing 1138 workers, mainly young women, and left many more injured. It was one of the worst industrial accidents in history, and came close on the heels of the Tazreen factory fire of November 2012, in which 112 people died.

Who was responsible for this tragic disaster?

In the words of Philip Jennings, General Secretary, UNI Global Union, "Many were complicit: the international brands that turned a blind eye to glaring problems in the factories where their garments were made; the factory owners who knowingly put their workers at risk in order to keep costs low; and the Bangladeshi authorities who made no effort to enforce their own health and safety laws".

The many red faces were pressured into responding. A Sustainability Compact was thus forged, committing the Government of Bangladesh, in cooperation with the EU, the US, the ILO and the private sector to bring about the necessary changes in the garment sector. It has three pillars -- respect for labor rights, structural integrity of buildings and occupational safety and health, and responsible business conduct.

Some improvements have been made to Bangladesh's labor law regarding freedom of association and collective bargaining. Over 300 new garment industry trade unions have been registered, doubling the total number, although only 5% of garment workers are union members. Over 2,500 safety inspections have been carried out in garment factories, with 32 factories having unacceptable conditions being closed. More than 250 inspectors have been trained. And the Bangladesh government has raised the minimum wage.

A compensation fund was also established by stakeholders including business, trade unions and NGOs. But it is still $8 million short of the agreed $30 million, leaving many workers and their families short-changed.

How much have things changed?

Not much is the consensus assessment.

The EU notes that, despite the achievements, "much more must be done. The EU renews its expectation towards Bangladesh's authorities to ensure the outstanding areas of the Compact are implemented in law and in practice".

On the occasion of the second anniversary of the Rana Plaza collapse, Human Rights Watch, an NGO, published a stinging report.

Based on its interviews with more than 160 workers from 44 factories, "workers report violations including physical assaults, verbal abuse -- sometimes of a sexual nature -- forced overtime, denial of paid maternity leave, and failure to pay wages and bonuses on time or in full. Despite recent recent labor law reforms, many workers who try to form unions to address such abuses face threats, intimidation, dismissal, and sometimes physical assault at the hands of factory management or hired third parties."

A global trade unions assessment of the Compact is similarly harsh, while recognising some progress made:

"Much remains to be done by the Government of Bangladesh and the garment industry, not only as to fire and building safety, but basic respect for the law -- both national and international standards ... In our view, a severe climate of anti-union violence and impunity prevails in Bangladesh's garment industry. The violence is frequently directed by factory management. The Government of Bangladesh has made no serious effort to bring anyone involved to account for these crimes..

This is due to "a combination of a serious lack of political will, failure of intra-governmental coordination, high levels of corruption and the extraordinary dominance of the garment industry (and others) in government institutions."

Another lively debate has been the extent and nature of corporate social responsibility of the brands that sourced their products from Bangladesh, notably Benetton, Bonmarche, the Chidren's Place, El Corte Ingles, Gap, H&M, Joe Fresh, Monsoon Accessorize, Mango, Matalan, Primark, and Walmart. The emerging consensus is that such brands should be accept responsibility for their whole global value chain, and cannot wash their hands of what their subcontractors do.

As OECD Secretary-General said, "global businesses must look beyond the bottom line and "go responsible" ... they must act responsibly through their supply chains." But the reluctance of much of the business sector to play the game responsibly is evident in the comments of Winand Quaedvlieg, chair of the investment committee of the Business and Industry Advisory Committee to OECD, when he said "an over-extensive interpretation of responsibilities along the supply chain would be counterproductive".

The ultimate lesson is that for countries to make the most of their global value chains requires a combination of good governance, respect for labor and other human rights, and responsible business conduct. In poor and weak democracies like Bangladesh, this will require many years of social and political activism, struggle and pressure. Even today in our advanced countries, these ideals are all too often out of reach, as we experience increasing inequality and poverty, along with growing capture of the state by big business.