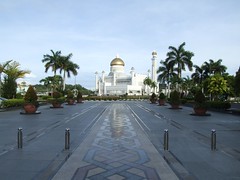 Glen Robinson takes us on a tour of Brunei.
Negara Brunei Darussalam or just Brunei is a tiny nation on the island of Borneo, Indonesia, in 2 distinct sections surrounded by Malaysia which in turn is surrounded by Indonesia, and
the South China Sea. It's known for its beaches and biodiverse rainforest, much of it protected within reserves.

The capital, Bandar Seri Begawan, is home to the opulent Jame’Asr Hassanil Bolkiah mosque and its 29 golden domes, and many other newsworthy mosques. It is a small country with a population just under 460,000 and it is fabulously wealthy, due to its location in relation to oil deposits, but it has come through a checkered history. It is a country not seeking international recognition, and consequently few people are aware of its natural beauty. However, it is a valued member of ASEAN, the Association of South Eastern Nations, which it joined in 1984.

The early history of the country is steeped in mystery and speculation. Brunei was known to be trading with China in the 6th century CE, within the Chinese trading network which existed for 3,000 years between 2000 BC to 1000 AD, and was centered in Taiwan and the Philippines. Excavations unearthed at approximately 22km from the Brunei capital suggest that the Chinese may have traded in the area as early as 835 AD.  It came under Hindu influence for a time through allegiance to the Majapahit empire, based in Java which existed between the 13th and 16th centuries.

When the ships of the expedition of Ferdinand Magellan anchored off Brunei in 1521, the fifth Sultan controlled practically the whole of Borneo. Toward the end of the 16th century, however, the territory was torn by internal strife and Brunei’s power subsequently declined through the 19th century, notably with the cession parts of Borneo, the expansion of

Sarawak, the cession to Great Britain of the island of Labuan in Brunei Bay, and the final loss of what is now Sabah. In 1921, the rich oil fields of the region were discovered and then exploited making the country incredibly rich, and Brunei now has one of the highest per capita incomes in the world.

The 1962 Brunei revolt was an insurrection by opponents of the proposed inclusion in the Federation of Malaysia. The insurgents began co-ordinated attacks on the oil towns, targeting the Royal Dutch Shell oil installations, police stations, and government facilities around the protectorate. The revolt began to break down, having failed to achieve key objectives such as the capture of the capital and the Sultan.
The revolt influenced the Sultan's 1963 decision not to join Malaysia. The long-term effects of regional changes could not be avoided, and Brunei entered a period of decline due to internal battles over royal succession, which, among other things disrupted traditional trading patterns. However, the oil and gas industry were not adversely affected by the minor disruptions in the country.

As prime minister, he presides over a Council of Ministers (cabinet) and is advised by several other councils
(Religious, Privy, Succession, and Legislative); the members of these bodies are appointed by the Sultan. In 2004 the Sultan approved several amendments to the constitution, including a provision for a partially elected Legislative Council.

Being such a small country with a small population and manufacturing represents approx. 12-15% of GDP, and the opportunities for local business are somewhat restricted, however, the industries which are operational are related to petroleum, petroleum refining, liquefied natural gas, construction, agriculture, aquaculture, and transportation industries. The companies which are in operation are cement production, garment making, production of pre-cast concrete structures, mineral water, canned food, dairy products, and publishing and printing. Given the small population, the manufacturing industries are structured for a small local market or in some cases they rely on an export market.

The Government actually encourages inward foreign investment, and incentives have been introduced to encourage investment, and new investments can receive exemptions from income tax for up to 5 years, depending on the amount of capital invested. The normal corporate income tax rate is 30%. There is no personal income tax or capital gains tax.  In 1999 the government initiated the Brunei Halal scheme, whereby it authorized selected companies to use the brand internationally to promote their products. It is reported to be a successful venture. It has recently been amended and all businesses in Brunei producing, supplying and serving food, beverages and any item which is orally consumed, must have appropriate certification.
The govts continues to encourage a pro-business environment continues with development of a program of reforms and improvements designed to streamline all aspects of doing business. The World Banks “Ease of Doing Business Index” has placed Brunei in 66th place in 2020, improved from over 100 just 5 years previously, a positive indication that the program of change is being effective, as the rating is “Easy”.

Several decades ago, the author was in the capital Bandar Seri Begawan, meeting with local businessmen and the subject of “what happens when the oil runs out??” was canvassed, and the interesting factor was that this issue had not been actively discussed, given that the oil revenue almost finances the country. That has changed and there is a program of encouragement for inward investment.

Being a country with strong Islamic history, one must recognise and acknowledge the requirements, however, this does not hinder nor discourage foreigners from being part of the community. It is possible to find a refreshment in the city if one is feeling thirsty on a hot Saturday afternoon, but of course there are limits which should be recognised.  In the commercial sense, most of the normal services are available, and quality and standard are quite high. The government services are well provided and there seems to be an attitude of trying to be of useful service, which is quite encouraging. It must be noted that the manufacturing sector is quite narrow, and the importation of components and other equipment is actually required. This not normally an impediment, but it should be remembered if goods are ordered they do need to be shipped probably through Singapore, and manufactured items produced for export also need to be shipped internationally.

There is no personal income tax for locals, there is free education, free health, there are no fees for domestic water, electricity, and other services like garbage collection. The roads are a delight, a comment not previously made in relation to any other country or city. In Bandar the roads are plentiful, wide, well-constructed and, I am not sure how it is achieved, but they do look attractive.

Add to this a beautiful country, an environment which is protected by the inhabitants to the extent that a walk through the jungle near the city is actually undertaken along a walkway which is high in the trees. This protects the trees and other habitation and provides the walker with an exhilarating and unusual view.

Brunei is a delightful country in which to live and conduct a business.

Glen is a co-founder and director of Asean Focus Group with Peter Church which was formed in 1990 to provide advice and assistance
to those organisations which wished to take a commercial presence in ASEAN and other Asian countries.  Throughout this process a
deep network of colleagues in the region was developed in both government and the private sectors.  A number of years ago the
company entered into a joint venture with Venture group and both trade as AFG Venture Group.

Glen is a director of the Australia Thailand Business Council and a Councillor of the Australia Institute of International Affairs NSW, .and
has undertaken consulting projects in Brunei.  The views expressed in this article are solely those of the author and not of any of the companies or organisations mentioned.
Tags: asean, brunei