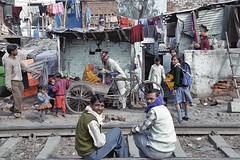 India is one of Asia’s later developers and similarly has an abundance of lower-skilled labour. India’s development since the early 1990s has been substantially facilitated by the export of information and communications technology (ICT) services rather than lower-skilled, labour-intensive manufactures. But to fully realise its economic potential, India must invest in a stronger manufacturing-led export sector.

Services now account for more than a third of India’s total exports, a larger share than in most OECD countries and emerging economies. India’s share of world services trade more than quadrupled from 0.5 per cent in 1995 to 3.5 per cent in 2018.

India is one of Asia’s poorest countries in terms of GDP per capita. According to Indian economist Santosh Mehrotra, India’s sophistication in areas like ICT services despite its poverty is attributable to key government policies that favour ICT industry development. These include government investment in high-speed internet connectivity for software parks, keeping hardware and software imports duty free, exempting the industry from the 45 labour laws which apply to other industries and public investment in technical education.

India performs strongly in the export of pharmaceuticals, medical devices and petroleum products. It is also the largest manufacturer of cut and polished diamonds, and has transformed itself from being a net importer to a net exporter in the smartphone market.

But a weakness in India’s development is its inability to exploit its comparative advantage in lower-skilled, labour-intensive manufacturing. Overall, manufacturing exports as a share of total exports have fallen and their composition has shifted from lower-skilled, labour-intensive products to higher-skilled and technology-intensive items. India has seen its share of world trade in textiles, garments and footwear decline in recent years while Bangladesh has almost caught up to India, and Vietnam has well overtaken it.

This weakness is costly for India’s economic growth. India currently has 11 million young and often poorly educated people entering the labour market every year. But the Indian economy is not creating enough jobs and a declining share of the working age population is actually in employment. Less than half of India’s working age population has a job while in China some 65 per cent are working. India’s inability to exploit its comparative advantage in lower-skilled and labour-intensive exports is costing young, poorly educated Indians jobs. This is undermining the country’s economic development and destabilising Indian society.

The government has been responsive to improving its manufacturing base, notably under the Make in India flagship program launched in 2014. India now has the opportunity to capture parts of China’s global value chains (GVCs) lost due to China’s rising labour costs, US President Donald Trump’s trade war and COVID-19 highlighting the risks of the high concentration of GVCs in China. While India has seized some of the market share lost by China, other Southeast Asian economies have done better.

But far greater efforts for structural reform are required if India is to fully realise its potential in lower-skilled and labour-intensive manufacturing.

There is a serious need to improve the business environment in India. Attracting foreign direct investment (FDI) is a starting point for participating in Asia’s GVCs, and barriers to doing business in India are limiting its FDI attractiveness. India’s restrictions on FDI remain higher than most OECD countries, based on the OECD’s Foreign Direct Investment Regulatory Restrictiveness Index. While India has been attracting growing amounts of FDI, much of India’s inward FDI has targeted the domestic market. But this is changing with the government’s Make in India program.

India still retains many restrictions on international trade. Its withdrawal from the Regional Comprehensive Economic Partnership does not bode well for trade liberalisation. India can open to further international trade by expanding the number of its special economic zones, which already account for a growing share of exports.

Trade and investment policies need to be complemented by domestic initiatives and reforms. Transport and energy infrastructure are critical for participating in manufacturing GVCs. But infrastructure has long been a bugbear for doing business in India, even if it is improving. India ranks 70th out of 141 countries for infrastructure in the World Economic Forum’s Global Competitiveness Report.

India also needs to strengthen its education system and reform its labour regulations and employment protection legislation. These weigh heavily on the competitiveness of manufacturers. The latter protects those with jobs and discourages job creation in the organised sector of the economy. Such protection provides a strong disincentive to hire workers as they are impossible to fire.

India’s dynamic services sector exports have demonstrated the great potential for the country to achieve sustained economic development. But to realise its full potential and to provide jobs for the 11 million people entering the labour market each year, it is imperative that the government makes much greater efforts to improve the export competitiveness of India’s lower-skilled, labour-intensive manufacturing sector.

This article was first published by the East Asia Forum on 10 July 2020.