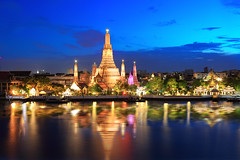 Thailand -- the land of smiles

Thailand is an unusual country in many ways, and it is worth examining some of its attributes, what makes it special, and why it is an endearing and appealing country, writes Glen Robinson.

As we in Australia read our blogs, watch our news sessions, and the few who read our newspapers, we may think that Asia consists of just one country, actually, may be encouraged to think that Asia is spelled C..H…I…N…A.  But there are 48 countries in Asia, China being just one, and India which has about the same population, and another particularly important grouping is the Asean group, which consists of 10 countries and Thailand is in that group and is the subject of this paper.  Why Thailand???

Thailand has a population of 70 million people, the median age of 40 years, with an average literacy rate of 93%.  So, we have a relatively young population which is well read.  With incoming tourists at 40 million per year [2019] they are used to the peculiarities of the foreigners.

Thailand has never been colonized, a fact which the Thai people are rightly proud, and they have attributes which are attractive.  However, there is a serious matter which detracts from the great image and that is the frequency of the military coups which have dogged the country for many years.  There have been 13 successful and nine unsuccessful coups in just over a century, the most recent successful one being in 2014.

It is hard to imagine the frequency of these coups in such a peaceful, engaging and tourist attracting country, but there have been more coups in this country than any other, and they have become bloodless, almost announcing them on TV. The military plays a significant role in the country.  Some years ago, a visitor was with a group of senior Thai business leaders and as they drove past a military establishment the visitor commented on the military coups.

The response, after the initial deathly silence was: “We in Thailand have a coup on the first Tuesday of each month, it starts at 11am and must be finished by lunchtime”.  Such was the frequency of coups and the lack of gravity with which they were viewed.

Interestingly, the coups have had little adverse effect on tourism, inward investment nor import/exports, certainly a lot less than may be expected.

Thailand is a constitutional monarchy, and this came about after reforms in 1932 which transformed the country from an absolute monarchy to a constitutional monarchy, the name was changed in 1939 from Siam to Thailand. In 1945, the name reverted back to Siam, and in 1949 it changed back again to Thailand and Thailand it remains today. King Bhumibol Adulyadej [Rama 9] reigned for over 70 years and he passed away in 2016 and his son Vajiralongkorn [Rama 10] assumed the throne shortly thereafter.  King Bhumibol was highly revered.  There have been several attempts to dilute the role and influence the monarchy, but none are serious and certainly lack public support.

The parliament is a bicameral one with the house of representatives called The National Assembly of Thailand (Ratthasapha) is the legislative branch of the government of Thailand, and consists of 2 houses, the House of Representatives and the Senate.  The House of Reps consists of 500 directly elected reps and the Senate is 250 people appointed directly by the military. Voting is compulsory.

The country has a hospitable climate, many beautiful natural things to see, many unusual and beautiful buildings which have an exotic presence.  Add to these a very friendly population which is generally fluent in several languages and it is not difficult to see why it is so popular with visitors.  In 2019 there were just under 40  million foreign tourists and according to the  International Medical Travel Journal it is the 3rd on the list of preferred destinations, receiving $US 600 million in medical fees last year

While many internationalists may snigger at the attractiveness of the country and some of the negatives, there are several attributes of the Thai economy and authorities which are extremely admirable and the major one is they get on and get things done, and there are several examples which adequately demonstrate this.

It was around the early 1990’s when the Sect Gen of the BOI, Khun Staporn Kavitanon, was asked if Thailand was going to emulate Malaysia and Indonesia and develop a national motor vehicle.  he responded that he did not wish to compete with the international vehicle builders but would much prefer to encourage them to come and build their vehicles in Thailand.

His policy was adopted, and today there are 23 major vehicle manufacturers, around 700 first tier suppliers and 7000 second tier suppliers to the industry.  A very prescient policy, and one which was the catalyst to the development of the white goods industry and also fostered a very strong engineering culture.

It was also in the very early 1990’s when the authorities realized that the population of 5.5 million in Bangkok was increasing by 2.5 %per year and traffic was becoming a problem which required some innovative solutions.  To alleviate the problem, a 4-level traffic system was promoted and by 2000 was well under construction.

In the 2 main streets a structure was installed in which the top level housed the monorail system commonly known as the BTS or the Skytrain, which is an elevated rapid transit system, equivalent in height to a 3 story building.  Due to the extensions, there now 53 kms of track and 48 stations, and there are plans to continue the extensions to 91 kms. It is an excellent transport system.

The next level down is the pedestrian walkway, the width is approximately equivalent to a 6-lane roadway.  At this level there are many escalators and stairways going both up and down and also out to the many shopping malls, hotels and major buildings which line the street.

The next level down which is the road on which the traffic flows, and without the pedestrians moves well, at least some of the time.

The Bangkok MRT underground network runs beneath the 2 thoroughfares which cut through the heart of downtown Bangkok. It currently comprises 18 stations and is 20 km long, and trains go every 5 to 7 minutes.  Additional lines and extensions are planned.  There are 2 interchanges with the BTS, and most stations have elevators for the disabled.

In a city which has grown to a population of 10.5 million the transport systems are quite good, and as busses and taxis have also increased their services to accommodate the local travelers. Travel around the Bangkok is not difficult despite the very large population.

The other important issue has been the action taken to control the outbreak of the Corona Virus 19. In a country sharing borders with Malaysia and much less developed countries and with relatively porous borders, such as Myanmar, Laos and Cambodia, the Thai authorities controlled the spread of the deadly disease.

Thailand is a country which is very attractive, has many appealing features, and also some issues to be avoided.  It is not difficult place to visit nor to take a longer-term view as a resident or as an investor.

Glen Robinson B.Sc (Tech) J.P. has spent 35 years providing advice and assistance to those organisations which wished to establish or enhance a commercial presence in Asean, particularly Thailand.  He is on the Board of the Australia Thailand Business Council and a Councilor for the Australian Institute of
International  Affairs [ NSW]
Tags: asean, thailand