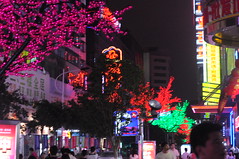 The Shenzhen Experiment: a book review

The rise of Shenzhen is arguably the greatest success story in world economic history. Just four decades ago, it was a mere fishing village. Today, metro Shenzhen has a population of over 20 million people, with some of the world’s tallest buildings. Its GDP per capita is the highest in China, according to some estimates. And it is widely regarded as China's answer to Silicon Valley with leading Chinese companies like Tencent, Huawei, ZTE, BYD and BGI based there.

What is Shenzhen’s founding myth? According to the Chinese Communist Government, today’s Shenzhen is the product of its brilliant policies. This “fishing village turned megalopolis” is presented as a well-planned “instant city.” But the story might be more complex, writes Juan Du in her recent book, "The Shenzhen Experiment: the story of China's instant city".

Juan Du, an award-winning architect, urban planner and academic, tells her story of Shenzhen through some of the people who made the city. The book opens with the story of Jiang Kairui, a budding song lyricist, who travels from the north-east of China to Shenzhen and wrote the song “The Story of Spring”, which was a huge national hit. Jiang became a successful songwriter, and in 2010 was named one of “Thirty Outstanding People of Shenzhen”.

Jiang’s journey was a few months after Deng Xiaoping’s mythologised “Southern Tour” in 1992 during which he visited Shenzhen and relaunched China’s reforms in the wake of the Tiananmen Square massacre, Some of the others to feature in her story are oyster fishermen, villages that remain encased within city blocks, and a secret informal housing system. It's Shenzhen’s people, more than Beijing’s leadership, which are principally behind Shenzhen’s success, according to Du.

Shenzhen is where China’s dramatic economic transformation started. Deng Xiaoping, China’s paramount leader, was so concerned about China’s poverty that he decided to experiment with market economics. So in 1979, he decided to create, in the rural borderland with Hong Kong, China’s first Special Economic Zone (SEZ). It would be a pilot for China’s reform and opening, and the world’s most successful economic zone, Du writes.

Despite having Deng’s support, the Shenzhen SEZ model was not supported by many of the conservatives in Beijing. Du explains that the creation of the SEZ in 1979 was “controversial, unpopular, and filled with insecurity and uncertainty”. In fact there were only very modest initial official ambitions for Shenzhen. At the time of its creation, a population of only 300,000 was projected for the zone by 2000, a fraction of what the city would become. And as conservatives tightened control in the wake of the 1989 Tiananmen massacre, Shenzhen’s future was seriously in doubt until Deng Xiaoping’s famous 1992 “Southern Tour” got reform back on track.

How did Shenzhen succeed so famously? For Du, three factors stand out. First, Shenzhen’s urban form and organization is “rooted in centuries of complex cultural evolution from earlier settlements,” including roles as an important port and administrative center.

Alongside some of China’s most stunning skyscrapers, Shenzhen still has over three hundred “villages in the city” or urban villages, which evolved from roughly two thousand former agrarian historic villages. These villages altogether hold nearly half of the city’s immense population. And the most important industrial engines during Shenzhen’s first decade of development were indeed town and village enterprises, rather than multinational enterprises or large Chinese enterprises.

Second, its economic success is deeply tied to its physical proximity and interpersonal ties with Hong Kong. Over the years many Shenzhen citizens have migrated to Hong Kong, thereby providing the networks which facilitated the city’s rapid development.

Third, the masses of internal migrants, both skilled and unskilled, who provided the city’s energy and dynamism.

The uniqueness of Shenzhen is evident in that the Chinese government has built hundreds of new towns using the Shenzhen model, but none has come close to replicating the city’s level of economic success.

“The idea that Shenzhen is a replicable model reinforces the assumption that cities can be politically planned and socially engineered from scratch,” Du writes. “But the Shenzhen experiment, as a singular successful case, has overshadowed the numerous examples of zone-based urbanization and developments which have not flourished in the same way.”

In August of 2019, the country’s State Council released a statement announcing that Shenzhen was to be developed into a “pilot demonstration area of socialism with Chinese characteristics”, with the aim of it becoming a “global benchmark city”. The timing of the announcement was unsurprising -- the government attention lavished on Shenzhen is in direct response to the civil unrest in Hong Kong.

Du’s book provides fascinating insights into the ups and downs of Shenzhen and its precarious journey. And for this reason it makes an excellent contribution to our understanding of China’s rise.

She does, however, not give enough credit to Deng Xiaoping. Sure, the Shenzhen Special Economic Zone is the product of its people and its historical and cultural context. But without Deng, it could well have been stopped.

Further, many readers will no doubt find the text heavy-going in parts because of all the details on urban planning documents and zoning decisions.