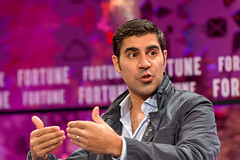 Book Review -- The Future in Asian

In his book, “The Future is Asian”, Parag Khanna provides readers with a rollicking ramble through the economy, society, culture, politics and international relations of Asia, which he defines to include Australia, New Zealand and the Middle East, as well as the conventional sub-regions of Asia -- Central, East, Southeast and South Asia.

The book gushes with facts, stories and anecdotes at such a pace that this reader was left highly impressed, but also overwhelmed and exhausted. Khanna recognises that Asia is greatly diverse, and faces many challenges and problems. At the same time, everything merely confirms his thesis that the future is Asian and that the US is increasingly irrelevant to the future of Asia and even the world. Overall, the book is analytically simplistic.

The ten chapters cover an extraordinary panorama of topics like Asian history, the return of Greater Asia, Asia-nomics, Asia and America, Asian and Europe, Afroeurasia, Asia and Latin America, and Asia Goes Global. Readers looking for Asian country profiles or a clear chronological approach will be disappointed. The facts, stories and anecdotes just keep rushing out, and different narratives blend together into one Asian soup, in which the region’s immense diversity gets lost.

I did find the chapter on Asia’s Technocratic Future interesting. Obviously inspired by Singapore, the country of his residence, Khanna argues the case for pragmatic, meritocratic technocracy as opposed to democracy. He believes that Asians are more interested in the superior results of technocracy. While it is hard not to share his concerns about the current problems of democracy, it seems clear that many Asians do value democracy in itself, not just as a process for achieving results. Witness Hong Kong today. And ask any Indian.

The most irritating part of the book is the strident and dogmatic opening chapter, “Introduction: Asia First”. For example, Khanna rashly claims that the cornerstone of an Asian-led world order began in 2017. He writes that there is a “growing coherence in Asia’s dizzying diversity”! He asserts that “Russians and Aussies should be seen -- and see themselves -- as white Asians”. He believes that Asia is now remaking the world in its image.

Much of the book is written in a condescending tone. Khanna remarks that his account of Asian history will not be familiar to most readers. He says “If Australia wants to be more welcome in Asia than the United Kingdom is in Europe, it needs to swallow the hard truth that it is not the center of Asia’s solar system but merely a moon -- one made of iron ore”.

Khanna recognises that “most Asians are not going to catch up to Western per capita incomes”. He notes “Asia could be the next epicenter of a global financial crisis”. And yet for Khanna, the future is still Asian! Apparently unaware of Asia’s disastrous environment, he writes “Asia’s spiritual revival has been an ecological motivator across the region”.

If you would like to be drenched in a shower of micro-information about recent developments in Asia, buy this book and fasten your seatbelts.

- Parag Khanna. The Future is Asian -- Global Order in the Twenty-First Century.