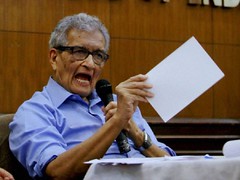 As the Indian economy is slowing down, it is now high time for the country to mobilise its full human potential for the next phase of its development, argues John West.

India has enjoyed a long period of sustained economic growth since reform was launched in 1991, with annual growth mainly in the 6-8% range. In recent years, it has hovered around 7% and has been the world's fastest growing large economy, as China's growth has slowed down.

But these days, the Indian economy is slowing down. This is driven by domestic factors like the buildup in corporate debt, and the after effects of hamfisted implementation of demonetisation and reform of goods and services tax.

Donald Trump's trade war with China is another factor, along with uncertainties caused by Brexit, which are both causing lots of collateral damage. India may not be an export-driven economy like some of its East Asian neighbours. But trade still does matter, and so India is exposed to the vicissitudes of the global economy.

India's most important markets for merchandise exports are at the heart of global instability. The United States is India’s leading export market, taking 16% of total exports. Other key markets are: United Arab Emirates (9%), China (5%), Hong Kong (4.1), Singapore (3.2), and the United Kingdom (3%). India is perhaps most vulnerable in its $150 billion technology outsourcing sector, especially as the US, its main market, is restricting visas for Indian technology workers.

How should India confront its emerging economic slowdown? After all, this may be a long drawn-out affair.

First, it is critical to have a deep understanding of the reality of India’s economic and social development. In this context, the analysis of Jean Drèze & Amartya Sen in their excellent book, "An Uncertain Glory: India and its Contradictions", has many insights and recommendations which are still relevant some six years after its publication.

Drèze and Sen highlight that although most Indian citizens have benefited from the long period of economic growth, elites have benefited very much more than the poor, and income inequality has grown enormously. One consequence is that the decline in India’s poverty has been very modest, and large sections of the Indian population still suffer from many deprivations in areas education, health, access to clean drinking water and sanitation.

Indian citizens are also suffering enormously from its horrendous environment. The State of Global Air 2019, published by Health Effects Institute (HEI), said exposure to outdoor and indoor air pollution contributed to over 1.2 million deaths in India (and also in China) in 2017.

Drèze and Sen went so far as to remark that India looks “more and more like islands of California in a sea of sub-Saharan Africa”.

Why have the lives of most Indian improved so little?

Elites who have access to a good education and good health services have done well, whereas the majority of Indian citizens have not. The latter group suffer from India’s poor public education and health systems which have limited their “human capabilities” and productive potential. Indeed, Drèze and Sen say that “the general state of public services in India remains absolutely dismal, and the country’s health and education systems in particular have been severely messed up”.

Overlaying this is discrimination based on caste, class and gender. India’s rank on the Global Gender Gap Index is only 108 out of 149 countries, whereas neighbouring Bangladesh is ranked 48th. While the 2011 Census of India recorded the number Dalit (formerly called “untouchables”) members at over 200 million people, representing 16 percent of India's population.

India also does poorly when it comes to higher education. It does not have even one university that makes it into the top 250 of The Times Higher Education World University Rankings. The India Institute of Science is the highest ranking Indian university, being placed in the 250-300th range. In sharp contrast, China, Singapore and Hong Kong have very many highly ranked universities, with China’s Tsinghua ranked 22nd and the National University of Singapore coming in at 23rd.

Regarding health systems, India is ranked only 45th out of 60 countries in the Global Access to Healthcare Index of the Economist Intelligence Unit. It is well behind Thailand (ranked 15th), China (25th), Philippines (35th), Indonesia (38th) and Vietnam (40th).

For their part, Drèze and Sen remark with disdain that “China devotes 2.7 per cent of its GDP to government expenditure on health care, compared with India’s relatively miserable 1.2”. It is hardly surprising that China’s life expectancy of 76 years should be eight years higher than India’s.

In point of fact, many countries which are now behind India in terms of GDP, have stripped ahead in terms of social indicators. For example, at only 69, India’s life expectancy is lower than Bangladesh’s 72 and Nepal’s 70, even though Bangladesh's GDP per capita is only 56% of India's, and 40% of India’s.

Moreover, the Indian government has not been using the extra public revenues from economic growth to invest in education and health. It is also doing very little to protect the environment at a time when air and water pollution is killing large numbers of Indian citizens.


What should India do?

Facing a slowing economy today, the most effective response for the Indian government would be to invest strongly in the country’s public health and education systems, as well as other social and economic infrastructure. This would enable India to mobilise its full human potential, something it has not been doing, and which has been undercutting its growth rate compared with China.

As Drèze and Sen quite rightly stress, this is not just a question of social justice. East Asian countries like Japan, Korea and China have demonstrated that healthy, well-educated workers can drive economic development, and enable economies to exploit the full benefits of more open markets. It is fanciful to imagine India becoming an economic superpower with its appalling education and health systems.

Drèze and Sen lay part of the blame for India’s predicament at the door of the dysfunctioning of its democratic system, which should foster a clearer public understanding of the abysmal extent of social and economic deprivations in the country. Unfortunately, they argue that “The deep inequalities in Indian society tend to constrict public discussion, confining it largely to the lives and concerns of the relatively affluent”.

In other words, the media and public intellectuals have a responsibility to promote an open dialogue on the reality of India’s economic and social development. They should take advantage of this opportunity that democracy offers them, and which our poor Chinese friends are deprived of.