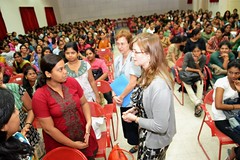 John West reviews Alyssa Ayres' recent book, “Our Time Has Come: How India is Making Its Place in the World”.
India is an emerging global power, which is playing a more active role internationally, even though it still faces many challenges at home, according to Alyssa Ayres.

Ayres notes that India has enjoyed strong economic growth of 6-7% annually, since a financial crisis in 1991 which pushed it to launch a process of economic reform. It now has the world’s seventh largest economy, ahead of Italy and Canada, and is on track to overtake the UK and France, and become the fifth largest.

In short, India is an emerging as a new power in a multi-polar system. It is now rubbing shoulders with the global economic heavyweights.


India is still on the sidelines of global governance

At the same time, however, India is on the sidelines of global governance writes Ayres, a clear point of frustration for this country with international ambitions.

Unlike China and Russia, India does not have a permanent seat on the United Nations Security Council. It is not a member of APEC (the Asia-Pacific Economic Cooperation forum), even though it has Asia’s third largest economy (after China and Japan). Its application is still sitting on the shelf. Nor is it a member of the OECD, the club of advanced democracies, despite being the world’s most populous democracy.

At the same time, India is not a “revisionist power”. It is not seeking to change the current international order. It would just like to play a more prominent role within the existing system.

True, India still has a host of domestic problems. Poor infrastructure. Enduring caste system. A heavy bureaucracy. Dysfunctional politics. While large numbers of Indians may have been lifted out of poverty, many are still living in near-poverty.

India is thus similar to China. An emerging global power -- thanks to its enormous population -- which continues to struggle with domestic challenges.

But India has been transformed dramatically by economic growth over the past 25 years. And looking ahead, India’s transformation should continue over the coming decades, according to Ayres.

In recent years, India’s reform has incremental, rather than dramatic. This can be frustrating, but over time it does add up. Prime Minister Modi has been criticised for his weak reform efforts. But important initiatives include harmonising the national goods and services tax, a new bankruptcy law and FDI liberalisation.

India has lots of potential for continued fast growth. It has lots of low-hanging fruit on the reform side of the ledger.

Labor laws which make it difficult to hire and fire employees have inhibited investment. most notably in the clothing industry. By contrast, Bangladesh, which is just one-sixth or one-seventh the size of India, has managed to become the world’s second biggest exporter of ready-made garments, after China.

India has great potential to reap a demographic dividend, with a large youth bulge entering the workforce. But it needs to provide education and skills, and create one million jobs a month, something which it is struggling to achieve. Unemployment is a growing problem.

India remains a land of contradictions. Continuing deep poverty in some areas, together with high-tech Bangalore. It is often difficult for Westerners to appreciate this complex reality, with both challenges and success stories.

Maintaining economic growth is the key to India’s future as an emerging power says Ayres.

India’s foreign policy has fundamentally changed from the days when policies of non-alignment, non-intervention, protecting sovereignty and strategic autonomy were the priority.

India now wants to play a greater role on the world stage writes Ayres. It is now emphasising "multi-alignment" (rather than non-alignment), and has strategic partnerships with numerous countries like US, Russia, Japan, France, Germany, UK and Australia.

Modi talks of India as a “leading power”, no longer a defensive or balancing power. India wants to more actively shape events in its region and beyond. Despite its talk of non-intervention, it does take a keen interest in domestic politics of its smaller neighbors like Nepal, Bangladesh, Sri Lanka, Maldives and Bhutan, when it sees its security interests affected.

It is a great supporter of the “free and open Indo-Pacific” concept, the QUAD (cooperation with Australia, Japan and the US), and freedom of navigation in the South China Sea.

Pakistan has long been India’s bogeyman. It has the world’s fastest growing nuclear arsenal, a government dominated by the military, and more terrorists than you count.

Indian governments have tried to improve relations with Pakistan over recent decades. But they get burned. Pakistan remains a safe haven for terrorists, who are never brought to justice. Ayres is not at all optimistic about the future of Indo-Pakistani relations.

India changed its position on climate change. India used to argue that it should be allowed to grow, and not be constrained by climate change considerations pushed by the West. But this changed in 2015. India now believes that it needs to reduce carbon emissions for its own sustainable development, and now has one of the world’s most important renewable energy programs.

India has both a competitive and cooperative relationship with China according to Ayers.

India is concerned about China’s growing presence across the Indian Ocean -- in Pakistan, Sri Lanka, the Maldives, Bangladesh and Nepal, notably through the Belt and Road Initiative. India is still subject to Chinese incursions into its territory in Arunachal Pradesh, which China claims as its own. In 2017, there was a military standoff between China and India, as India came to the defense of Bhutan when China constructed a road in Bhutan territory.

India is also concerned about its trade deficit with China and market access restrictions in China.

But India also partners with China, notably in the area of global governance. India is the number two contributor and number one recipient of loans from the Asian Infrastructure Investment Bank. It is a member of the BRICS group and the Shanghai Cooperation Organisation.


India and the US

Over recent decades, successive US and Indian governments have been working together to overcome many years of mistrust and estrangement. US/India relations are better today than they have ever been according to Ayers. A convergence of views on the role of China is one factor that has helped bring the US and India closer together.

Defense cooperation has been the best area of cooperation. India is also the US’s fastest growing trading partner. Further, Indian FDI in US growing at a clip. Innovation collaboration between US and Indian companies is a growing trend, which is not the case with China

But India and the US are not allies in the traditional sense. India has its own ideas, and wants partnerships based on equality of relations. It does not want to sign up for everything the US wants to do. For example, India is not willing to participate in US efforts to contain Russia and Iran.

India likes the US’s use of the term Indo-Pacific (as do Australia and Japan). It highlights the central role of India in the region, which was not the case with the term Asia-Pacific.

One new point of friction is the US’s trade deficit of $26 billion with India. It is the US’s tenth largest bilateral deficit, and Donald Trump is now targeting it. And India has been caught up in Donald Trump’s trade war, as it has been subject US tariffs in steel and aluminium.

It is uncomfortable with Trump’s economic protectionism, especially for high-skilled worker visas in the US. India would like better access for its IT workers to sell their services. It is however happy with Trump’s approach to Pakistan and Afghanistan.

Ayres recommends that US and India should develop a “joint-venture approach” to the relationship. They should work on the things they have in common, but accept that there are many areas where they may not be in agreement. The US should promote global governance reform to support participation by India in the UN Security Council, APEC and the OECD.

India does not attract much attention in US because it is neither a close ally, nor is it a crisis-country. But it is certainly a country worthy of much more attention.

Ayers book, and her many conference presentations, make a very important contribution to our understanding of the many aspects of the rise of India. She is a “go-to” expert on anything to do with India

- Alyssa Ayres. Our Time Has Come: How India is Making Its Place in the World.