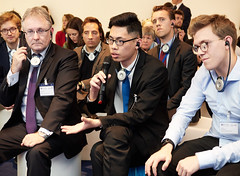 Review of Asian Century on A Knife-Edge:

In writing this book, Professor West has not undertaken an analysis of the Asian Century through rose-tinted glasses. Nevertheless, he has offered a reasoned account for his views and I as a young Asian am very much impressed that there has indeed been a convergence between those views and my most recent thoughts on the Asian Century.

Out of Professor West’s Seven Challenges for the Asian Century, the biggest reflections I have had during the course of reading this book are that the Asian Century will be hampered by three main things: geopolitical conflict and contestation, high social and economic inequality as well as the lack of a strong pan-Asian co-operational framework in the same manner as the European Union has had to date.

I applaud the author for having undertaken the immense task of collating supporting statistics and personal accounts to offer a coherent and critical analysis of the issues within his book but of course, I can point out some areas where critics may seek to focus upon, mainly:

Professor West’s rubric for assessing the present situations of the various Asian nations has been based on the Western liberal democratic and neo-liberal economic tradition. Perhaps more could have been laid out at the beginning to justify this rubric and to counter the so-named “Asian Values” as underlined by Lee Kuan Yew and Dr Mahathir.

The geopolitical scope of the book seems to be confined to Southeast Asia, South Asia and East Asia. But naturally the continent of Asia encompasses not just these regions but Siberian Russia, Central Asia and the Middle East. Perhaps more could have been said as to how these Asian regions have been affected by China’s rise.

Sino-Japan and Sino-Indian tensions have and will be a major flashpoint in the years to come but other commentators have argued that the Indo-Pakistani tensions would be a more salient flashpoint. Perhaps, a more in-depth analysis of those tensions and how India’s rise might be hampered and how China could be dragged into these tensions could be a useful addition as well.

Much of the statistics the book has cited tend to originate from Western-dominated international organisations. I would expect many Asians to dismiss the book’s analyses offhand due to its reliance on these statistics. Reliance on these statistics is in itself not flawed but I would simply point out that Asians are in general dismissive of any arguments based off any of these statistics. More critically, I would say that GDP per capita would seem to be too sterile a measure to encapsulate the wide divide between the Western and Asian nations. On the other hand, I have enjoyed reading those personal accounts of ordinary Asians as well as those classes sandwiched between poverty and the middle class. I would think that more of these accounts would be handy in future as a complement to statistics.

I would encourage the author to further his research into Singapore and Hong Kong. What I am analysing as of now is that both cities will be in decline in the years to come and a critical analysis of these declines will be supportive of the general thesis of the book: that Asian countries will fail to escape the middle-income trap due to a lack of innovative spirit resulting from a rather conformist social hierarchy and political repression. What I would briefly say is that both cities portray an illusion of sustainable high-income status.

Lastly, the author has mentioned to audiences that in light of all the geopolitical tensions in Asia, one wonders if there is such a thing as Asia. I would say that the book is emblematic of a general common Asian denominator: tribalistic nation-state societies dominated by religious/socio-economic/political/business elites who stress conformity and subservience of the individual to the greater societal whole (whatever that means). If one is not of those elites or do not wish to conform, then one cannot survive in that society for long. That is what it means to be Asian.

With all things, there is always room for improvement. Nevertheless, Professor’s West’s book offers a digestible, but not cursory, bird’s eye overview of the issues that afflict the Asian Century. I would definitely give my encouragement to the author to pursue a second edition or a follow-up book in a series as the years go by. Events in Asia have passed too quickly since the publication of this book and I definitely look forward to reading further analyses by Professor West in the years to come.